FORGERY, FRAUD, AND AN “OPEN SECRET”

(Nov. 6, 2019) — On Tuesday, Project Veritas (PV), founded by James O’Keefe, released an explosive report demonstrating that executives at ABC News declined to air additional evidence pointing to the late Jeffrey Epstein’s abuse of young girls and women over a number of years as described by “Good Morning America” anchor Amy Robach on a “hot mic” and video.

The footage was reportedly recorded in late August and leaked to PV by an ABC News “insider.” O’Keefe and his organization have encouraged members of large tech companies, mainstream media outlets, and other public and private groups to “Be Brave” by coming forward with evidence of bias, corruption and abuse within their respective environments.

“I tried for three years to get it on to no avail,” Robach is seen stating in her “hot-mic” remarks about the Epstein story she researched in 2016 in the wake of Epstein’s death in federal prison on August 10.  “And now it’s all coming out and it’s like these new revelations…” She added that “Other women [were] backing it up” and “There will come a day when we will realize Jeffrey Epstein was the most prolific pedophile this country has ever known.”

Epstein was found deceased at the Manhattan Correctional Facility after his early July arrest on allegations of federal sex-trafficking.  After what was alleged to have been an initial suicide attempt later in July, his death was pronounced a suicide by federal investigators.

Last week, well-known forensic pathologist Dr. Michael Baden told Fox & Friends that he was asked by Epstein’s brother to attend the autopsy and as a result, determined independently that Epstein’s injuries were more consistent with a homicide rather than a suicide.

Between 2008 and 2009, Epstein served an unusually light 13-month sentence in Palm Beach County on a plea deal on two counts of “felony solicitation of prostitution and procuring a minor for prostitution” brought by the State of Florida, The South Florida Sun-Sentinel reported.

His state prosecution resulted in federal prosecutors abandoning their potential case against him, the paper additionally wrote.

It has long been asserted that former President Bill Clinton flew on Epstein’s infamous private jet, the “Lolita Express,” more than two dozen times.  In her remarks on the hot mic, Robach said that “It was unbelievable… we had – Clinton, we had everything…”

After PV’s report was issued Tuesday, ABC News and Robach quickly offered responsive statements, O’Keefe reported, stating that three years ago, the story did not meet the station’s “editorial standards.” 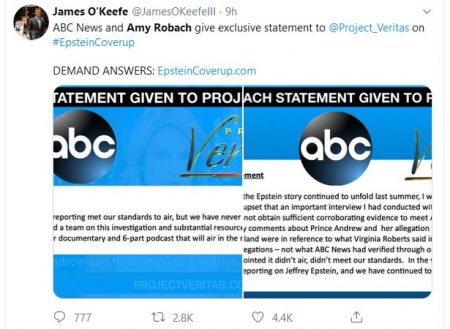 In her statement, Robach asserted, “I was upset that an important interview I had conducted with (claimed Epstein victim) Virginia Roberts didn’t air because we could not obtain sufficient corroborating evidence to meet ABC’s editorial standards about her allegations…”

In 2016, and dating back five years before that, major media swept aside another even more explosive story implicating an unknown number of individuals who knowingly concocted and presented a “computer-generated forgery” to the American people as representative of Barack Hussein Obama’s “long-form” birth certificate.

The image, uploaded to the White House website on April 27, 2011, was almost immediately declared a forgery by several graphics experts largely ignored by the mainstream media and, in one case, contorted with a failure to correct.

Despite mounting evidence of forgery and fraud presented publicly by former detective and then-lead investigator Mike Zullo over more than five years, the media consistently reported the whitehouse.gov image as authentic.   Members of the media also accepted the “fact” that Obama was born in Hawaii despite a lack of any tangible “evidence,” for which it constantly calls upon Donald Trump and his administration to provide to support any number of its public statements and policies.

Prior to Obama’s first presidential run, announced in February 2007, it was multiple mainstream media outlets which had often reported his birthplace as Kenya or Indonesia and not Hawaii, as Obama has claimed for a number of years.  In many cases, the same media later removed or altered its original reporting to say that he was born in Hawaii without explanation.

As the campaign progressed and Obama became the Democratic presidential nominee, Americans began to question whether or not he met the “natural born Citizen” requirement in Article II, Section 1, clause 5 of the U.S. Constitution for the president.

The media has never explained its own inconsistencies, including a 2008 Washington Post article stating that Obama was “raised in the Kansas heartland” attempting to diffuse “false Obama rumors.”

Obama’s description of himself last year as “from Kenya” and his wife’s 2008 statement that Kenya is his “home country” were not enough to prompt mainstream outlets to investigate the background of the man they unquestionably assisted to become America’s presumptive 44th president.

In an April 2019 interview with Carl Gallups of “Freedom Friday,” Zullo said that as a corollary to his 5+-year investigation into the birth certificate image, he learned that media executives were “colluding” with the Obama White House to quash any reportage of the issue.  “It was Fox News; it was MSNBC; it was everything across the gambit that an order had to come down somewhere: collusion with media executives not to talk about the birth certificate,” Zullo told Gallups.  “That’s bone-chilling.”

On the evening of March 1, 2012, following what became the first of three press conferences about the birth-certificate probe, Zullo had been scheduled to interview with Fox News’s Sean Hannity, an appearance which was canceled shortly before it was to begin, Zullo said.

Zullo had also been scheduled to appear with Lawrence O’Donnell of MSNBC that evening, but the interview met the same fate as Hannity’s, Zullo said on “Freedom Friday” in April.

Ironically, Hannity later developed a penchant for the mantra, “The media never vetted Obama.”  However, to this day, Hannity and other Fox News personalities not only avoid the “birth certificate” subject, but also deny the underlying “birther” premise that Obama might not have been born in the United States, as the media had itself originally reported.

Fox News employees have, however, accessed this publication’s work on the reported forgery of the birth-certificate image.

In addition to evidence of forgery gathered during the first six months of the investigation, at the March 1, 2012 presser Zullo revealed that members of the media provided him with sworn affidavits stating that they were warned by their bosses not to investigate Obama’s birthplace and other details of his life or risk their career. In one instance, Zullo said, a substitute host for The Rush Limbaugh Show said he was told by the show’s producer, “If you do anything on that birth certificate, you will never work in this industry again.”

If anyone raised questions about Obama’s origins, background or life narrative, the likes of The New York Times, MSNBC’s Chris Matthews, The Daily Beast, CNN’s Anderson Cooper, The Observer, Politico, and New York Magazine, among others, applied the “birther” label to the questioner as well as the accusation of “racism.”

In what Zullo described as “gaslighting,” the media demonstrated no curiosity over his conclusions that the birth-certificate image is a forgery, even when interviewing then-Maricopa County Sheriff Joseph Arpaio, who commissioned the investigation.  “Arizona sheriff still impugning Obama birth certificate,” reads a CNN headline from a 2015 exchange between Jake Tapper and Arpaio despite then-two press conferences revealing detailed evidence as to the fraud perpetrated on the American people.

The April discussion between Zullo and Gallups had encompassed what is now known as “the Deep State,” or entrenched, unelected government bureaucrats led by politicized heads of agency departments within the CIA, FBI, the State Department and the U.S. Justice Department.  Many Americans believe that it was “Deep-State” operatives from within the former Obama regime who in 2016 targeted the Trump campaign to create the illusion and narrative of “collusion” with Russians in an alleged conspiracy to alter the outcome of the presidential election.

In another unprecedented revelation on the April show, Zullo stated, “We’ve also come to learn and understand from media executives that there actually are CIA employees embedded in media newsrooms. They’re not supposed to be doing that. The CIA’s charter is not to work inside the confines of the United States of America. They’re supposed to work outside, abroad.”

Zullo has on several occasions said that in regard to the birth-certificate findings, “I really believe that all roads are going to lead back to John Brennan.”

The media continued its blackout even after Zullo said publicly that two U.S. intelligence agents, both with considerable experience, told him that it is “an open secret” in Washington, DC that Obama was not born in the United States.

What Other Big Story Did the Mainstream Media Squelch? added on Wednesday, November 6, 2019

7 Responses to "What Other Big Story Did the Mainstream Media Squelch?"