Obama Says He is “From Kenya”

THEN IS HE A “NATURAL BORN CITIZEN” OF THE U.S.? 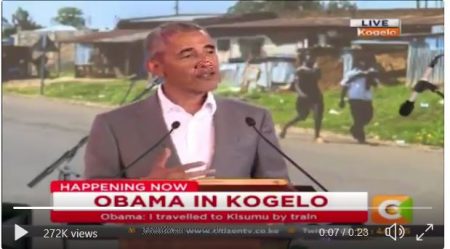 In November 2014, Dr. Obama held a two-day workshop on the identical theme of helping young people to develop their potential in Tutzing, Germany, the nation where she obtained her higher education.  The program is now permanently operating in Cologne.  The slogan of the initiative is, “Use what you have to get which you need.”

During remarks made to a sizable gathering of guests at the Jomo Kenyatta grounds in Kisumu, Kogelo last Monday, Barack Obama told a story of how for the first time, at the age of 27, he rode a train through the primitive Kenyan countryside to arrive at the home of his step-grandmother, Sarah Obama, known colloquially as “Mama Sarah.”

“It’s a joy to be back…” Obama said at the opening of his speech, wherein he went on to describe his initial trip during which he said he wanted “to better understand the life of my father and the life of his people.”

Obama’s official life narrative states that his father, Barack Hussein Obama, left Kenya for the U.S. in 1959 to study at the University of Hawaii at Manoa, where he reportedly met Kansan Stanley Ann Dunham.  According to the narrative, Barack Hussein Obama II was born on August 4, 1961 in Honolulu, although no hospital in the state of Hawaii has claimed to be his birthplace.

Further uncertainty exists as to whether or not Barack Obama from Kenya ever married Dunham, and the Hawaii Department of Health (HDOH) does not release vital records to anyone without “a direct and tangible interest in the record.”

Obama described his stay at “Mama Sarah’s” home without running water as a way for him to “connect” with his past, different though it was from the life to which he had been accustomed in the U.S.

“I could not be prouder of what my sister’s accomplished,” he said at 5:31 to applause.  “I think it makes all of us who are Obamas or claim to be Obamas extraordinarily proud.”

At 5:46, said, “Three years ago, I visited Kenya as the first sitting American president to come from Kenya,” again to enthusiastic applause.  “…Today I’m really coming as a brother, as a citizen of the world, as someone with a connection to Africa to talk about the importance of what she’s doing, but also to create a larger context for what’s possible.”

The broadcast was made available by citizentv.co.ke and has garnered more than a quarter-million views as of this writing.

Auma Obama’s remarks at the opening can be viewed here.

Since 2007, when Obama announced his presidential candidacy on a blustery February day in Springfield, IL, questions have persisted about his birthplace, life story and nationality given an abundance of mainstream media reports stating that he was, in fact, born in Kenya and not in the United States. Other reports stated that he was born in Indonesia, including an on-air statement from MSNBC’s Chris Matthews, an ardent Obama supporter.

Article II, Section 1, clause 5 of the U.S. Constitution requires that the president and commander-in-chief be a “natural born Citizen.” While providing no succinct definition for the term, many scholars believe that the Founding Fathers were referring to a person with undivided loyalty to the new nation which at the time of the Constitution’s writing consisted of having fought in the Revolution against the British Crown.

A clause within Article II provided an exception for those not considered “natural born Citizens” at the dawning of the new nation but long ago was rendered obsolete due to the passage of time.

Prior to last Monday’s speech, Obama has referred to himself as “a citizen of the world.”

In June 2008, an image said to be Obama’s birth certificate from the Hawaii Department of Health was circulated on the Internet and posted on his then-“Fight the Smears” campaign website. The origin of the image has never been confirmed.

In May 2009, then-White House Press Secretary Robert Gibbs insisted that the “short-form” image was the only “birth certificate” available to any citizen born in Hawaii requesting it. However, in April 2011, a “long-form” image was posted on the White House website after allegedly having been obtained from the HDOH by Obama’s then-personal attorney, Judith Corley of Perkins Coie.

A five-year investigation carried out by a former detective under the authority of the Maricopa County Sheriff’s office (MCSO) determined that the long-form birth certificate image is a “computer-generated forgery,” with evidence from the investigation reportedly provided to federal authorities.

During the course of the probe, lead investigator Mike Zullo discovered that airline manifests showing incoming flights to Hawaii between August 1 and August 10, 1961 are missing from the National Archives, whose spokesperson  could offer no plausible explanation.

Prior to the 2008 election, Obama’s wife Michelle said that her husband’s “home country” is Kenya. However, anyone suggesting that Obama was not born in the United States during the course of his presidency, and even afterward, has been labeled “a racist.”

The FBI has declined to investigate the forgeries.

25 Responses to "Obama Says He is “From Kenya”"