DOES THAT MEAN “INDICTED”? 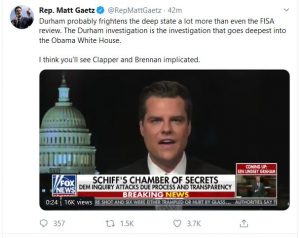 (Oct. 29, 2019) — At approximately 1:40 PM EDT, Rep. Matt Gaetz (R-FL1) tweeted that he believes Barack Obama’s director of national intelligence, James Clapper, and CIA director, John Brennan, will be “implicated” as the U.S. attorney designated to identify the origins of the Russia “collusion” narrative delves into possible criminality on the part of the U.S. intelligence community.

On Thursday evening, The New York Times and other outlets reported that the administrative probe undertaken by the Justice Department earlier this year and assigned to U.S. Attorney for the District of Connecticut John Durham had changed in nature to a “criminal” investigation.

At some point during the 2016 presidential election cycle, the FBI opened a counterintelligence investigation into the Trump campaign on the alleged suspicion that one or more Trump aides, or Trump himself, could have been coordinating with Russian operatives to affect the outcome of the election. After then-FBI Director James Comey was fired on May 9, 2017, the investigation was turned over to Robert S. Mueller, III, who had preceded Comey at the Bureau and served in a number of federal government positions over the course of his career.

After 22 months of investigation, hundreds of witness interviews and 2,800 subpoenas issued, Mueller’s team of 19 prosecutors concluded that there was insufficient evidence demonstrating any coordination between the campaign and the Kremlin.

On the follow-on allegation that Trump committed “obstruction of justice,” the Mueller report arrived at no conclusion.

Gaetz, a strong Trump supporter, opined in his tweet that, “Durham probably frightens the deep state a lot more than even the FISA review. The Durham investigation is the investigation it goes deepest into the Obama White House.”

“The FISA review” refers to a major report anticipated for release within the coming days regarding whether or not the Justice Department and FBI abused the process by which surveillance warrants are obtained on American citizens through the Foreign Intelligence Surveillance Court (FISC). A “dossier” assembled as opposition research and paid for by the Democratic National Committee (DNC) and Hillary Clinton campaign was used as the bulk of “evidence” submitted to the court to obtain warrants to monitor the communications of former Trump campaign advisor Carter Page for the period of a year.

Page was never charged with a crime and has said he has received death threats emanating from the state of Oklahoma as a result of the FISA warrants.

Gaetz concluded his tweet with, “I think you’ll see Clapper and Brennan implicated.”

Brennan’s name has arisen frequently over the last 18 months on several fronts.  Last year, Obama birth-certificate lead investigator Mike Zullo said on a radio show that in regard to his 5+-year probe which found the birth-certificate image posted on the White House website a forgery, “I really believe that all roads are going to lead back to John Brennan.”

After the Trump administration announced Durham’s appointment in May, P&E reader Robert Laity contacted Durham’s office to convey that in his view, Obama had usurped the office of the presidency “during time of war” out of his inability to meet the “natural born Citizen” qualification in Article II, Section 1, clause 5 of the U.S. Constitution for the president and commander-in-chief.

Although Congress has failed to address the reported forgery of the long-form birth certificate image and Obama’s Selective Service registration form, as declared by Zullo, some Republicans have joined Gaetz in focusing on Brennan, Clapper, and other former high-ranking members of the U.S. intelligence community who may have played a role in devising a scheme aimed at derailing Trump’s candidacy and later, transition and presidency.

The CIA is not authorized to conduct surveillance domestically, and many reports suggest that several Western overseas intelligence agencies were commissioned to deploy “spies” to engage with Trump campaign aides, including George Papadopoulos, Carter Page, Sam Clovis, and Michael Caputo.

Earlier this month, Attorney General William Barr and Durham traveled to Italy, where they reportedly met with members of that nation’s intelligence apparatus in a soundproof room in connection with the now-criminal investigation. For more than two years, Italy has been home to Maltese professor Joseph Mifsud, who met with Papadopoulos on two occasions in 2016, one of which he utilized to tell the young campaign aide that unnamed Russians reportedly held “dirt” on Hillary Clinton.

Papadopoulos was later charged with lying to the FBI about the timing of his contacts with Mifsud and accepted a plea agreement, for which he spent 12 days in federal prison late last year. The transcript of Papadopoulos’s closed-door deposition with members of congressional committees investigating the “collusion” matter indicate that Papadopoulos recalled having been approached by at least a half-dozen U.S.- and non-US intelligence figures while he worked overseas in the energy industry in 2015 and 2016.

According to investigative journalist Sara A. Carter on Thursday night, Mifsud fears for his safety as he continues to take refuge in Italy; Papadopoulos has reported that the Italian government is providing Mifsud with security.  Carter also reported that “The heat is on Clapper and Brennan.”

Brennan, a staunch Trump opponent, claims that the 45th president is guilty of “treason” and of jeopardizing the United States’s national security by placing himself “wholly in the pocket of Putin.”  In an October 2 interview with MSNBC’s Nicolle Wallace, Brennan indicated that he was aware that Justice Department investigators wished to interview him about his role in the Russia “collusion” narrative.

He made a similar prediction in in March, then claimed he could have been the recipient of “bad information.”