Zullo on Obama Long-Form: “There is no Original Certificate; There Never Was”

“THE MICROFILM WILL HAVE THE TRUTH” 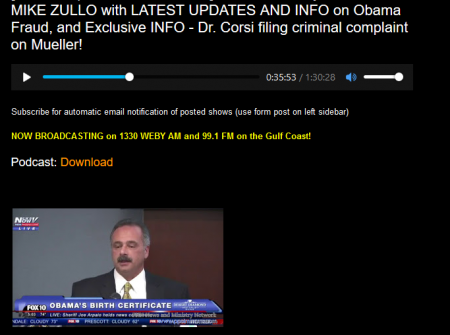 (Dec. 2, 2018) — Beginning at approximately 13:15 in the podcast of Friday night’s “Freedom Friday” show, Obama birth certificate lead investigator Mike Zullo explained how the five-year probe early on surpassed the “probable cause” standard regarding the “long-form” image posted by the Obama White House, reaching the level of “proof” that it is a forgery.

The image, posted at whitehouse.gov on April 27, 2011, bears the name “Barack Hussein Obama II” and was claimed by Obama to have presented “additional information about the site of my birth.”

Host Carl Gallups pointed out that no one “outside the [Hawaii] Department of Health” has attested to the genuineness of the PDF image.  “The public has never seen an authentic Hawaii birth certificate for Barack Obama.  Even though they want to say there’s information in the file, that doesn’t make a birth certificate…because there is no original certificate.  There never was,” Zullo responded.

Prior to the release of the long-form image, Corsi conducted extensive research on Obama’s origins and the likelihood that the White House would release an inauthentic document after then-businessman Donald Trump publicly voiced questions about Obama’s eligibility and lack of documentation.

In a number of interviews over the preceding week, when the “birth certificate” issue arose, Corsi explained that the public has never seen an authentic birth certificate on Obama from the state of Hawaii.

At 27:00 in the podcast, Zullo repeated Corsi’s announcement that he plans to file a criminal complaint against Mueller with Acting Attorney General Michael Whitaker’s office on Monday, December 3.  Zullo added that after speaking with Corsi, he understands that Corsi intends to immediately make the complaint public.

Mueller’s investigation was reportedly tasked with identifying any “collusion” with Russia by members of the Trump campaign and whether or not Russia interfered in the 2016 elections.  Thus far, no one has been accused of “collusion,” though more than two dozen parties have been indicted for “process crimes” or with election interference.  All of those charged with the latter are Russian citizens or entities.

A former detective, Zullo explained that “communist-socialist types” utilize the technique of accusing others of what they themselves have done, citing the example of “Hillary Clinton” having allegedly committed crimes while she served as Obama’s secretary of state.  “They are covering their own sins, their own tracks,” Zullo said.  “That’s why they are deathly afraid of Donald Trump.”

Zullo referred to “three-letter agencies” which some associate with “the Deep State,” or entrenched government employees tending to oppose Trump’s policies as president.

Zullo said that Trump has “got something  because he started to go out there and start tweeting that he’s going to drop a load of information that will startle America.  The guy doesn’t say anything for the sake of saying it.”

Gallups then mentioned Trump’s retweeting of someone else’s “meme” depicting Hillary Clinton, Bill Clinton, Barack Obama, Deputy Attorney General Rod Rosenstein, Obama Attorney General Eric Holder, and others in a graphic bearing the caption, “Now that Russia collusion is a proven lie, when do the trials for treason begin?” 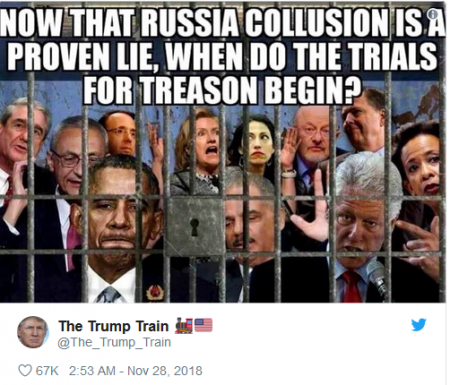 Trump has vociferously and frequently denied that anyone on his campaign “colluded” with the Russians or anyone else to win the election against Clinton.

Gallups said that Trump was “telegraphing” by retweeting the meme, with which Zullo agreed.

In an interview with Gallups on November 16, Zullo revealed for the first time that “very, very high, high, high-level White House officials have had a cursory briefing of the information that we garnered about the certificate.”

Addressing himself to “Mr. President,” Gallups said, tongue-in-cheek, “I recommend you release your tax returns in PDF format,” causing both men to laugh.

To close the segment, Gallups presented for the second time an interview clip between NBC News producer Anna Schechter and Corsi wherein Schechter suggested to Corsi that he is a conspiracy theorist “who can’t help himself” and wrong about “the birth certificate.”  Zullo noted that Schechter raised Obama’s “birthplace” rather than the authenticity of the PDF image.  “We don’t care where he was  born…we were looking at the falsification of an official government document…If the birth certificate isn’t real, you don’t know where he was born…Nobody knows,” Zullo said.

“What we want to see is the original microfilm records from 1961,” Zullo continued, “and we also would want to see the other file that contained information that was imported into ‘the original file’…the microfilm will have the truth.”

“The other file” likely refers to the birth certificate of Joanna Ah’Nee, which Zullo concluded was a source document for the Obama long-form forgery.

Later in the show, Gallups suggested to producer and guest Mike Shoesmith that the “collusion” was among government agencies, including “courts,” on the Obama birth certificate.  “…they don’t want to deal with it, because they’re all complicit, including Congress,” Gallups said.

Zullo on Obama Long-Form: “There is no Original Certificate; There Never Was” added on Sunday, December 2, 2018

2 Responses to "Zullo on Obama Long-Form: “There is no Original Certificate; There Never Was”"