HOW DEEP WILL THE INVESTIGATION GO? 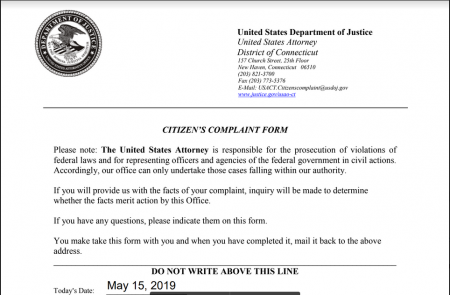 (May 15, 2019) — In the early-morning hours Wednesday, New York State resident Robert Laity completed a “Citizen’s Complaint” form located on the website of the U.S. Attorney for the District of Connecticut headed by U.S. Attorney John Durham, who was announced on Monday as having been selected to investigate the origins of the Trump-Russia “collusion” investigation which ended in a paucity of evidence supporting the FBI’s original allegation.

According to Fox News on Tuesday night, Durham commenced the assignment weeks or even “months” ago at the request of U.S. Attorney General William Barr, who was himself confirmed and sworn in on February 14 of this year.

Laity’s complaint centered on his allegation that Barack Hussein Obama was never eligible for the presidency due to his failure to meet the “natural born Citizen” requirement in Article II of the U.S. Constitution.

A report was delivered to Barr on March 22 by Special Counsel Robert Mueller indicating that insufficient evidence was found by his 22-month investigation to support the FBI’s contention that individuals within the Trump campaign “colluded” with Russian operatives to affect the outcome of the 2016 election.

Barr has been highly criticized for his statement to a congressional committee last month that he believes “spying did occur” on the Trump campaign on the part of the U.S. intelligence community, although he did not preclude that the surveillance may have been properly “predicated.”

In February of last year, Durham was confirmed as President Trump’s choice for U.S. Attorney for the District of Connecticut after serving as its acting U.S. attorney since the previous October.

Durham’s career has included prosecuting public corruption, including allegations against FBI agents involved in the “Whitey Bulger” case in Boston beginning in 1999 under President Bill Clinton. In that case, four men went to prison, two of whom died there, with all declared innocent years later.  A retired FBI agent, John Connolly, Jr., was convicted of racketeering and will reportedly be in prison until 2039.

According to a 2002 article in The New York Times, “In the 1980’s, while Mr. Connolly was working with Whitey Bulger, Mr. Mueller was assistant United States attorney in Boston in charge of the criminal division and for a period was the acting United States attorney here, presiding over Mr. Connolly and Mr. Bulger as a ”top-echelon informant.” Officials of the Massachusetts state police and the Boston Police Department had long wondered why their investigations of Mr. Bulger were always compromised before they could gather evidence against him, and they suspected that the F.B.I. was protecting him.”

In an email accompanying his formal submission to Durham, Laity wrote, “Please see attached complaint against Barack Obama and include this information in your current investigation into the propriety and Predication of the Mueller Investigation.” 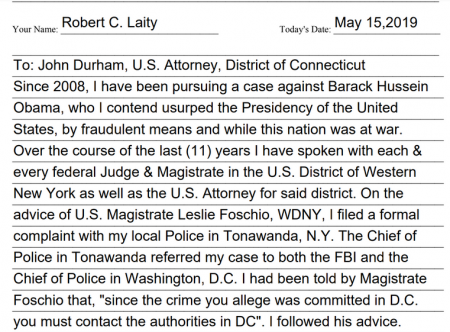 Along with the complaint form, Laity included an April 17, 2017 letter he wrote to President Trump regarding his belief that Obama “entered the Office of the President of the United States, by fraudulent means and without legal bona-fides during time of war” which Laity said “makes Barack Obama a spy under the Uniform Code of Military Justice.”

The day after Barr was confirmed, Laity contacted Barr by letter in which he stated, “I trust that you will investigate this matter. I await your response.  FYI, I placed Barack Obama under formal citizen’s arrest with service upon Eric Holder, circa 2012. I believe this matter is of national security import. I trust that you will treat this matter with the utmost of seriousness. Your predecessors apparently did not do so.”

The Barr letter was included in Laity’s submission to Durham’s office, as was a copy of Laity’s publication, “Imposters in the Oval Office” published in August of last year.

Article II, Section 1, clause 5 of the U.S. Constitution contains an eligibility requirement different from those for members of Congress and the judiciary and reads:

The clause is believed to have emanated, at least in part, from a letter which future governor of New York and first U.S. Supreme Court Chief Justice John Jay wrote to then-Constitutional Convention President George Washington as the Framers discussed a new governing document to replace the Articles of Confederation. In the letter, Jay wrote:

Questions about Obama’s constitutional eligibility arose in 2007 following his declaration on February 10 of that year that he would seek the presidency. A number of public and credible reports by NPR, the Associated Press, The Honolulu Advertiser, and others reported Obama as having been born in either Kenya or Indonesia rather than in Hawaii, as Obama’s life narrative and presidential biography claim.

Further, a 1991 biography issued by Obama’s then-literary agent, Acton & Dystel, originally said that Obama was “born in Kenya and raised in Indonesia and Hawaii.” After Breitbart News made public the biographical pamphlet on May 17, 2012, Miriam Goderich, who in 1991 worked for Acton, explained the discrepancy as “nothing more than a fact checking error by me.”

Barack Obama’s literary agents were still listing the U.S President’s birthplace as Kenya in their online author bios two months after he first announced his run for president in 2007.

Viewed on web.archive.org the April 3rd 2007 listing from Acton & Dystel for Mr Obama still touts the then-Democratic junior senator from Illinois as ‘born in Kenya’.

On December 19, 2007, MSNBC’s Chris Matthews told his audience that Obama was “born in Indonesia.”

Obama claims a birth in Honolulu on August 4, 1961 and a father who was never a U.S. citizen. A number of historical references indicate that a “natural born Citizen” was undoubtedly a person born in the United States to two parents who were themselves U.S. citizens. As to those born in the country to parents who were not naturalized or otherwise U.S. citizens, the U.S. Supreme Court said in the 1875 case of Minor v Happersett that there were “doubts” as to whether or not they could be considered “natural born.”

Whether or not the citizenship of the parents is germane to the argument, a number of as-yet unsuccessful efforts in Congress to amend the “natural born” requirement have been made with the understanding that a birth on American soil is essential.

In 2015, a number of announced presidential candidates born in the U.S. to non-citizen parents or, in the case of Ted Cruz, born outside of the United States, contended that they met the eligibility criterion of “natural born Citizen.” Laity challenged their eligibility in New York and New Hampshire.

In 2011, Laity filed a ballot challenge with the New York State Board of Elections over Obama’s eligibility which eventually reached the U.S. Supreme Court but received no oral argument or opinion.

On April 27, 2011, the White House released what it said was a PDF scan of a certified copy of Obama’s “long-form” birth certificate obtained from the Hawaii Department of Health (HDOH). Declared highly questionable by a number of experts within hours, the release prompted what became a 5+-year investigation into the origins of the image, concluding, with the agreement of two outside forensic analysts unaware of one another’s work, that the image is a “computer-generated forgery.”

While the investigation, conducted by former New Jersey Detective Mike Zullo under the authority of the Maricopa County, AZ Sheriff’s Office (MCSO), did not focus on Obama’s place of birth, Zullo has said publicly that the probe found no evidence of Obama’s having been present in the state of Hawaii “before the age of 5.”

“He was in Indonesia” at age 5, Zullo said on the “Freedom Friday” program last year, in contrast with Obama’s narrative stating that between the ages of birth and five he was in Hawaii, then at age 6 went with his mother to Indonesia.  According to Obama’s public life story, he lived there until age 10, then returned to Hawaii to live with his grandparents.

Critics of the Russia “collusion” investigation and the intelligence community’s possible role in prompting it have pointed to former CIA Director John Brennan as having allegedly played a key role in circulating the false “collusion” information prior to the 2016 election. Beginning last summer, Zullo said in a number of interviews that he believes that in regard to the birth certificate forgery, “all roads lead to John Brennan.”

Whether or not Durham focuses on Brennan and other former leaders of the intelligence community remains to be seen.

Reader Contacts US Attorney John Durham about Obama’s Eligibility added on Wednesday, May 15, 2019