“THIS MATTER IS NOW IN YOUR HANDS” 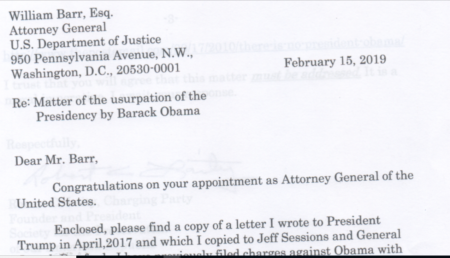 (Feb. 16, 2019) — On Friday, reader, Navy veteran and presidential eligibility activist Robert Laity informed us that he sent a letter to newly-installed U.S. Attorney General William P. Barr regarding his contention that Barack Hussein Obama II “usurped” the office of the presidency due to his constitutional ineligibility.

In his February 15, 2019 communication to Barr, Laity enclosed a copy of a letter sent by certified mail to President Donald Trump, then-Attorney General Jeff Sessions, and Chairman of the Joint Chiefs of Staff Joseph Dunford in April 2017 outlining his concerns.

“The matter is now in your hands,” Laity wrote to Barr. “I trust that you will investigate this matter. I await your response.”

It was Trump who in early 2011 openly aired his doubts as to Obama’s eligibility based on the White House’s failure to release a “long-form” birth certificate to prove that Obama was born in Hawaii, as he has claimed.  In June 2008, a “short-form” Certification of Life Birth was released by an unconfirmed party, later said to have been Tommy Vietor, then a member of Obama’s campaign. The image’s authenticity was immediately questioned for several reasons, and the Hawaii Department of Health (HDOH) never confirmed that it produced the document represented by the image.

After months of pressure from Trump, on April 27, 2011, the White House released what it said was a scan of a certified copy of Obama’s original birth record from the HDOH.  Within hours, however, a number of published graphics experts deemed it a poorly-assembled forgery.  Those findings prompted 242 constituents of then-Maricopa County, AZ Sheriff Joseph Arpaio to approach him with the request that he launch an investigation into the origins and authenticity of the image.

Arpaio assented, believing the task would be brief and ultimately “clear the president.”  However, just over six months later, Arpaio’s Cold Case Posse, in the person of lead investigator Mike Zullo, declared at a press conference that probable cause was found to believe the image to be a “computer-generated forgery.”

The mainstream media has neglected to aggressively report on or conduct its own investigation into the posse’s conclusions, instead ridiculing anyone who has questioned Obama’s life narrative, which Zullo has refuted. Although three major press conferences were held over the course of the 5+-year investigation reinforcing the conclusions of forgery and fraud, the media ignored the ramifications of the production of fraudulent documents for a sitting president of the United States.

To the public’s knowledge, neither the FBI, Justice Department nor Congress has launched an investigation.

Laity’s conclusions stem from Article II, Section 1, clause 5 the U.S. Constitution, which states that only a “natural born Citizen” can become president of the United States and commander-in-chief of the US military.  He believes that Obama was never eligible to the office of president given that his father was first a British, and later a Kenyan, citizen after that country gained its independence from the Crown in December 1963.

Obama claims he was born in Honolulu, HI on August 4, 1961 to an American-citizen mother, Stanley Ann Dunham, and Barack Hussein Obama of Kenya.  On his 2008 campaign website, “Fight the Smears,” Obama claimed presidential eligibility by way of the 14th Amendment and a birth in Hawaii two years after it became the 50th state.

Since Obama first declared his presidential aspirations on February 10, 2007, many Americans have questioned whether or not a birth in the United States to a foreign-citizen parent or parents qualifies the person as “natural born.” The same question has been raised about Sen. Kamala Harris, who declared her presidential candidacy on January 21. Harris was born in Oakland, CA to a Jamaican father and East Indian mother, neither of whom had resided in the United States long enough to have applied for citizenship.

Harris’s Senate office has not responded to multiple inquiries as to her parents’ status at the time of her birth. Harris has also obfuscated her school-age years which were spent in Canada, not in the United States. While her Senate website arguably gives the impression that she spent her formative years in Oakland, an interview provided to an East Indian newspaper in 2009 quotes her as having said that she attended schools in Berkeley, CA through college.

Whether or not by design, the mainstream media, and specifically CNN, conflated any questions about Harris’s eligibility to focus on her birthplace and not her constitutional eligibility.

Some in recent history have posited that a person born outside of the U.S. can be considered a “natural born Citizen,” although the 1958 World Book Encyclopedia stated unequivocally otherwise.  Without delving deeply into the issue, most Americans understand the term “natural born Citizen” to mean “born in the United States,” at a minimum.

Obama himself has said he is “from Kenya.”

Throughout history, the eligibility of numerous presidential candidates has been questioned, to include Charles Evans Hughes in 1916; Lowell P. Weicker in 1980; Sen. John McCain in 2000 and 2008; and George Romney in 1968.

Laity has brought a number of legal actions in his home state of New York alleging that then-declared presidential candidates Sen. Ted Cruz, former Louisiana Gov. Bobby Jindal, and Sen. Marco Rubio are not “natural born Citizens.”  He has also challenged the State of New York Board of Elections to correct its stated presidential eligibility requirement from “born a citizen” to “natural born Citizen,” as Article II requires.

The Post & Email received no response when it inquired of the NYSBOE as to why its wording does not mirror that of the Constitution.

In August, Zullo reported that two U.S. intelligence sources informed him that it is “an open secret” that Obama was not born in the United States.

Laity’s recent correspondence is below.