FORGERY OF “LONG-FORM” BIRTH CERTIFICATE RAISES A MULTITUDE OF QUESTIONS 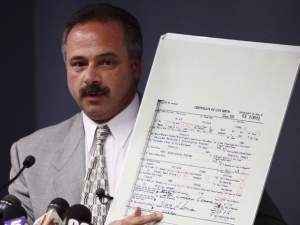 Corsi recounted that he was grilled for “16 hours” by Zullo after presenting investigative leads he had gathered suggesting that Obama’s public life narrative did not match the assertions and reports which had appeared in credible news reports over many years.

Some of those reports clearly stated that Obama was born in Kenya or Indonesia, not Hawaii, as he has claimed.

Just days before the White House released what it said was a scan of a certified copy of Obama’s “long-form” birth certificate in April 2011, Corsi published “Where’s the Birth Certificate?” Some believe the book served as the catalyst for the release of the “long-form” image.

Launched in August 2011, Zullo’s 5+-year investigation found early on that the long-form image is a “computer-generated forgery” and that his purported Selective Service registration form is a “hard-copy forgery.”

When a listener and radio host himself, Ed Sunderland, asked the question, Corsi reminded the listeners that he had contacted the National Archives to request microfilm of airline manifests dated between August 1 and August 7, 1961, the week Obama was purportedly born, and was told that the records are “missing.”

Zullo has invoked that finding as part of the official investigation.

At 42:50 in the broadcast, Corsi opined that the birth certificate forgery “is not going to go away.”  On another topic, he predicted that Trump “will take the right step” if the violent communist group Antifa’s actions necessitate law-enforcement action.

Corsi’s interview ended after approximately 48 minutes.  He is currently writing a new book about the Trump presidency and the “Deep State” which is expected to appear on bookshelves beginning on February 20.

At approximately the 50:00 mark, Volin brought on Zullo, who discussed the birth investigation through the remainder of the show.

Zullo predicted that in 2018, “the hunted” will become “the hunter” in regard to corruption within the U.S. government.

Volin raised the issue of former Hawaii Gov. Neil Abercrombie’s allegedly close friend, celebrity journalist Mike Evans, who claimed in a January 2011 radio interview that Abercrombie told him that he had “searched everywhere” in state government and concluded that “there is absolutely no proof that he [Obama] was born in Hawaii.”

“He admits publicly that there is no birth certificate,” Evans told the interviewer of Abercrombie, who had purported to have known Obama’s parents from before his birth.

Shortly after Abercrombie took office, he told several media outlets that he was resolved to locate Obama’s birth record to dispel doubts about his birthplace prior to the 2012 presidential election.  However, within days, he said it could not be produced because of Hawaii’s privacy law regarding vital records, but not until claiming that he had been unable to “find” it.

Just 15 months before, however, then-Hawaii Department of Health (HDOH) Director Dr. Chiyome Fukino had said that she had “seen” Obama’s original birth record.

After Volin played the audio of Evans’s interview, Zullo said that no Hawaii hospital has ever found records that Obama’s purported mother, Stanley Ann Dunham, was a patient there or that Obama’s birth took place there.

Within 24 hours of his initially bold claim, Evans retracted it on the Peter Boyles show and several other radio shows, claiming that he had originally said he “talked to Neil’s office” and not directly to Abercrombie.  “I was never able to get a hold of the governor,” Evans then claimed.

When Boyles asked Evans who had claimed that “there was no birth certificate,” Evans said he “was calling Neil to find out what he thought about that.”  Evans then told Boyles that the newspaper birth announcements declaring a son born to Obama’s purported parents are “a little shaky, if you ask me.”

Zullo commented that if the birth certificate “couldn’t be found,” doubt exists of Abercrombie’s initial claim that a notation of Obama’s birth existed “in the archives.”

Carl Gallups of “Freedom Friday” has also hosted Zullo and discussed Evans’s peculiar behavior after making the claim that Abercrombie told him that there is no birth certificate for Barack Hussein Obama in Hawaii.

On April 27, 2011, the White House revealed the “long-form” image, which was declared almost immediately by several experts to be a poor forgery.  Those claims eventually led to Arpaio’s commissioning of Zullo’s investigation, which ran from August of that year to the end of 2016.

In interviews over the years, Zullo has said that the investigation could find no evidence that Obama was ever in Hawaii before the age of five, contradicting his public life story which claims that he was born in Honolulu and attended kindergarten there, then went with his mother to Indonesia at age 6.

Obama purportedly lived and attended school in Indonesia until age 10, when his mother sent him back to Hawaii to live with her parents.

Zullo described Evans’s retraction as “a cover-up” and an attempt to “walk back” his claim that he had spoken directly with Abercrombie.

“The very fact that you would have to check the hospitals” indicated that “no one could find” Obama’s birth record at the Health Department, Zullo said.

Of Abercrombie, Zullo reminded the audience that Abercrombie’s story about the direct witnessing of Obama’s birth in Hawaii changed to his having watched the child play T-ball or some other children’s sport at the age of four or five.

“He was not in the United States at five; he was in Indonesia,” Zullo said in a new revelation just after the one-hour mark.

Zullo observed that Obama’s “life narrative” from before his presidential run, although inconsistent among a number of sources, “goes back to these foreign countries,” which includes Kenya.  He noted that Obama “makes no attempt to correct that record before running for the presidency.”

“One day, the narrative changed…” Zullo said, which he described as “telling in and of itself.”

Zullo told the audience that determining Obama’s birthplace will be left to other entities; however, he explained that after making two trips to Hawaii to speak with Health Department and hospital officials, he was unable to “clear” the long-form birth certificate image as authentic.

After announcing his bid for the U.S. Senate last week, Arpaio has raised the issue of the “phony document” the investigation found was proffered by the White House as Obama’s long-form birth certificate.  Whether or not purposely, media reports continue to misrepresent that the investigation focused on Obama’s birthplace.

The two-hour podcast can be hear here:  http://www.blogtalkradio.com/wheresobamasbirthcertificatexcom/2018/01/16/jerome-corsi-state-of-our-nation-followed-by-mike-zullo

10 Responses to "Zullo: Obama in Indonesia at Age Five"