WILL WE LEARN WHO “COLLUDED” WITH WHOM?

(May 14, 2019) — Fox News and “The Hill’s” John Solomon reported Tuesday evening on “Hannity” that Attorney General William Barr’s appointment of U.S. Attorney for the District of Connecticut John Durham to investigate the origins of the probe which falsely claimed that members of the Trump campaign were working with Russians to win the 2016 election will enable a “new tool” for the Justice Department’s inspector general to obtain discovery in the matter.

Durham has been working on the project for weeks or even months, Sean Hannity reported Tuesday during the opening minutes of his 9:00 p.m. ET show.

“Steele” is Christopher Steele, author of the Trump-Russia “dossier” alleging nefarious activity on the part of Russians to see that Trump was elected over Democrat Hillary Clinton and possibly involving hacking of Clinton’s emails.  The “FISA warrant” refers to surveillance conducted on former Trump campaign adviser Carter Page, who was accused of but never charged with being “an agent of a foreign government,” namely, Russia.

DOJ Inspector General Michael Horowitz has been investigating the 2016 actions of the DOJ and FBI since early 2017, prior to Donald Trump’s inauguration, issuing a 568-page report last June finding former FBI Director James Comey “insubordinate” in his handling of the Hillary Clinton private server probe.

As a result of the first IG report, several FBI officials were referred to the DOJ’s Office of Professional Responsibility (OPR) for possible disciplinary action, and former FBI Deputy Director Andrew McCabe was referred for possible criminal investigation for reportedly lying during interviews about media leaks.

McCabe was terminated in March 2018, maintains his innocence, and has sued the Justice Department for his firing.  In interviews earlier this year to promote his new book, “The Threat,” McCabe left open the possibility that Trump is a “Russian asset.”

Horowitz is expected to produce two more reports this month or next, one of which will likely detail the media’s bribing of FBI agents to supply classified information on its investigations in exchange for gifts.  The second will reportedly deal with “abuse” of the Foreign Intelligence Surveillance Act (FISA) in regard to Carter Page, whose communications were monitored for a year beginning in late October 2016.

Solomon said that Durham can present evidence to a grand jury and ask for subpoenas, an authority not within the scope of Horowitz’s responsibilities.

As he reported exclusively late last week, Solomon said that following an October 11, 2016 meeting with Steele, State Department official Kathleen Kavalaec communicated her concerns about inaccuracies within the dossier to FBI official Stephen Laycock, who Solomon identified as “the Section Chief for Eurasia inside the FBI Counterintelligence Division.”  Solomon reported that he was told that Laycock then forwarded Kavalec’s notes to the team led by then-Deputy Assistant Director of Counterintelligence Peter Strzok, which was investigating allegations of “collusion” between Trump and Russia.

Strzok was key player in both the Clinton email investigation and the “collusion” probe which ended in March with Special Counsel Robert Mueller finding no evidence of improper collaboration between the campaign and the Kremlin.  Text messages from 2016 and 2017 between Strzok and FBI Counsel to the Deputy Director Lisa Page discovered by Horowitz indicate an extreme dislike for Trump and the suggestion that an “insurance policy” of sorts be activated in the event he won the election.

In regard to Kavalec’s identification of inaccurate information in the dossier such as the claim of a “Russian consulate” located in Miami, FL, “the FBI should have gone and checked that out,” Solomon said, quoting unnamed individuals with whom he spoke who formerly occupied Laycock’s position.

Instead, he said, ten days later, the FBI submitted the dossier to the FISA court, claiming its contents were “verified.”

At 9:14 p.m., following Solomon’s interview, Rep. Devin Nunes appeared to say that classified information which he said “rests with the FBI” amounts to “exculpatory information” relating to former Trump campaign adviser George Papadopoulos, who claims he was spied upon by no fewer than six U.S. intelligence informants in 2016. 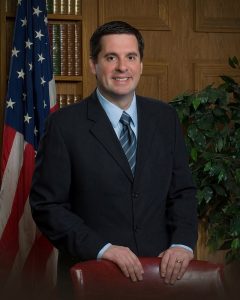 Nunes, formerly the House Intelligence Committee chairman and now its ranking member, is attempting to “declassify” the referenced document, he said.

In his book, “Deep State Target,” Papadopoulos said that in a meeting with two FBI agents who unexpectedly pounded on his front door in early 2017 and demanded to speak with him, he claimed he met with Maltese professor Joseph Mifsud before he became associated with the Trump campaign, an inaccuracy he said resulted from speaking with the agents without an attorney and his calendar.

Papadopoulos subsequently accepted a plea agreement for lying to the FBI.  In recent days, he has been a guest on “Hannity,” with Fox News’s Martha MacCallum, with radio host Mark Steyn, and with Fox Business Network’s Maria Bartiromo describing a bizarre set of experiences he now believes were “setups.”

Nunes refuted statements made by Comey that “a mosaic” of information, and not just the dossier, was presented to the FISA court to obtain the Page surveillance warrants.  Further, Nunes said, Kavalec performed more due diligence than did the FBI on Steele’s information, as ten days later, the dossier was submitted to the court.

Kavalec had noted that Steele expressed a desire for the dossier’s contents to be made public prior to the November 8, 2016 presidential election. Steele’s aversion for Trump was noted by Justice Department official Bruce Ohr, who testified last summer to congressional investigators that he warned DOJ and FBI cohorts that the dossier was “source information” and not fully vetted.

Nunes said he believes that Steele’s employer at the time, Fusion GPS, which commissioned the dossier on behalf of the DNC and Clinton campaign, was intent on circulating “lies” to damage the Trump campaign.