“HE’S EITHER THE PRESIDENT OR NOT” 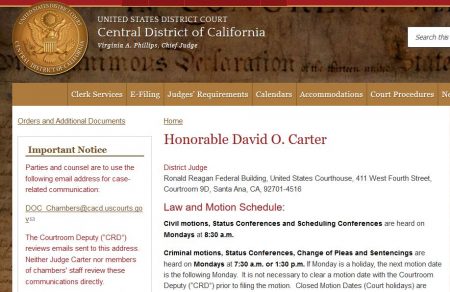 (May 3, 2019) — On Friday afternoon, a reader from the U.S. Justice Department was logged as having accessed an article from 2010 about U.S. District Court Judge David O. Carter, who continues to preside in the Central District of California.

The article, written by citizen researcher David F. LaRocque and titled, “The strange case of Judge David O. Carter,” reported on a lawsuit challenging Barack Hussein Obama’s constitutional eligibility to serve as president which Carter had originally expressed interest in hearing but in a sudden about-face, declared the court as “lacking subject matter jurisdiction” (page 4 of 30).

The article reflected that an appeal of Carter’s order, dated October 29, 2009, granting the Defendants’ Motion to Dismiss, was filed with the Ninth Circuit Court of Appeals.

In his order, Carter concluded, in part:

Plaintiffs have encouraged the Court to ignore these mandates of the Constitution; to disregard the limits on its power put in place by the Constitution; and to effectively overthrow a sitting president who was popularly elected by “We the People”–over sixty-nine million of the people. Plaintiffs have attacked the judiciary, including every prior court that has dismissed their claim, as unpatriotic and even treasonous for refusing to grant their requests and for adhering to the terms of the Constitution which set forth its jurisdiction. Respecting the constitutional role and jurisdiction of this Court is not unpatriotic. Quite the contrary, this Court considers commitment to that constitutional role to be the ultimate reflection of patriotism.

“When the plaintiffs and their attorneys learned that the district court judge assigned to the case was Judge David O. Carter, they were elated and greatly encouraged,” LaRocque wrote. “Judge Carter is a graduate of both UCLA and the UCLA School of Law, and a highly experienced and respected jurist. Judge Carter has a background as a criminal prosecutor and as a professor at several institutions, including the University of California at Irvine, where he has received the school’s Distinguished Professor Award three times. He also lectures frequently at judicial conferences worldwide, and at the California Judges College, the Judicial Criminal Law Institute, and the Ninth Circuit Judicial Conference.”

Reporting on Carter’s military background and awarding of a Purple Heart and Bronze Star for his heroic actions in the Vietnam War, LaRocque continued:

To the plaintiffs in Barnett v. Obama, Judge David O. Carter seemed like an answer to their prayers. How could they ask for a more perfect judge? In a case which required a combination of an extraordinary judicial temperament, demonstrated courage, and unquestioned loyalty to the United States Constitution, Judge Carter seemed to have all of these qualities in abundance. Moreover, since there were strong indications of serious criminal acts of election fraud in the events leading up to the conclusion of the 2008 presidential election, it was felt that Judge Carter (given his prosecutorial background) was likely to share the plaintiffs’ desire to see the case heard on its merits, and that he would insure that an appropriate judicial environment was maintained to insure that would happen.

The first hearing in the case was held in the federal courthouse in Santa Ana, CA on July 13, 2009 with Judge Carter presiding. Interested citizens lined up early outside the courthouse for security screening. After a lengthy delay, the courtroom was finally opened for seating.  This writer was an eyewitness to the proceedings.

The lawsuit combined two actions, one represented by Atty. Orly Taitz and the other by then-Atty. Gary Kreep, over their objections. “The respective attorneys finally agreed to combine the cases under protest after a private discussion also witnessed by this writer during a lengthy recess but failed to resolve their differences,” LaRocque wrote.

In 2012, Kreep was elected a judge for the Superior Court of San Diego County, Office 37.  He was defeated in his 2018 re-election bid.

Obama’s eligibility first became an issue in 2007, after credible, mainstream reports surfaced during the course of the campaign that he was born outside of the U.S.  Obama’s life narrative states he was born in Hawaii on August 4, 1961 to a U.S.-citizen mother and British-citizen father who never became a U.S. citizen.

Article II, Section 1, clause 5 of the U.S. Constitution requires that the president and commander-in-chief be a “natural born Citizen.” While not expressly defined in the founding document, it is generally understood that a candidate for president cannot be a naturalized citizen, meaning he or she was born in another country.

Some constitutional scholars go farther to say that a candidate must of been born in the United States to to US-citizen parents to avoid any chance of foreign allegiance given a clause added to Article II at the suggestion of Founding Father John Jay, who became the first Chief Justice of the U.S. Supreme Court:

Permit me to hint, whether it would not be wise & seasonable to provide a strong check to the admission of Foreigners into the administration of our national Government, and to declare expressly that the Command in chief of the american army shall not be given to, nor devolved on, any but a natural born Citizen

Reports of Obama’s foreign birth have never been reconciled with his claim of a birth at the Kapiolani Medical Center for Women & Children in Honolulu. The hospital has never confirmed Obama’s birth there, citing “privacy” laws.

At the time of the Taitz/Kreep suit, a citizen uploaded a “description” of the action to Scribd: 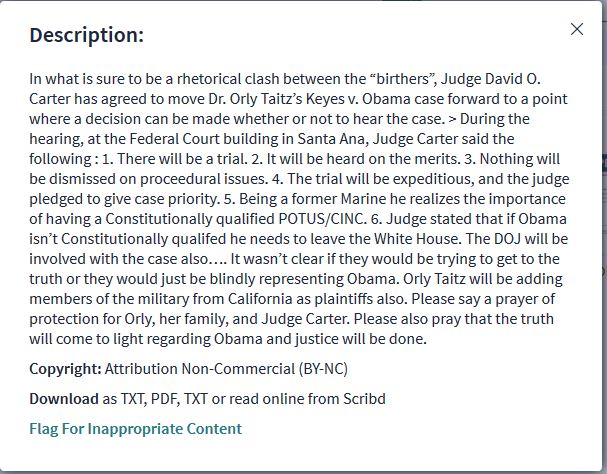 The uploader then reproduced an article from WND dated July 13, 2009 titled, “Eligibility arguments to get court hearing” by Bob Unruh. The article begins:

In what ultimately could prove to be a turning point in the legal challenges to Barack Obama’s eligibility to be president, a federal judge in California has planned a hearing on the merits of a federal court case raising those questions.

According to attorney Orly Taitz, who is working on multiple cases alleging Obama is a “usurper” because he doesn’t meet the constitutional requirement that only a “natural born citizen” can be president, U.S. District Judge David O. Carter ruled in a hearing today that her case will move forward.

The hearing was on her motion for a default order against Obama, because although Taitz said she notified him of the action, Obama’s attorneys did not make an appearance.

Her complaint was filed against the president on Jan. 20, the day of his inauguration, over his actions before he became president.

Taitz has told WND if her motion for default is granted she immediately would request access to Obama’s birth records and other documentation that could determine his eligibility to occupy the Oval Office.

In his article, LaRocque cited statements from the July 13, 2009 transcript in which Carter said of Obama, “He’s either the President or not” and “I mean, if he’s not President, he shouldn’t be President; if he is, he should be.”

No court in the nation, including the U.S. Supreme Court, has ever heard oral argument to discover whether or not Obama was constitutionally-eligible to serve as president.

In April 2011, the White House produced what it said was a PDF from a certified copy of Obama’s “long-form” birth certificate from the Hawaii Department of Health in an apparent effort to demonstrate his eligibility to serve in advance of the 2012 election.

Within hours and days after its presentation to the world, a number of American graphics experts declared the image fraudulent.  Their reports gave rise to what became a 5+-year criminal investigation into the long-form image, which early on found it to be a “computer-generated forgery.” Also declared fraudulent at a March 1, 2012 press conference was Obama’s purported Selective Service registration form, which lacked the four-digit year appearing in 17 other authenticated Selective Service registration forms of the era.

Discrepancies in Obama’s life story published by mainstream sources have never been explained.

The probe’s chief investigator, Mike Zullo, has said that the U.S. intelligence community was involved in the perpetration of the long-form image as authentic in the person of then-CIA Director John Brennan.

Despite the media’s ridicule of anyone doubting Obama’s claimed life story, Zullo has said that his investigation showed that “There is no original certificate; there never was.”

The evidence gleaned from the probe is reportedly in the hands of high-level Trump administration officials.

As a result of growing evidence coming to light that the Obama regime may have “spied” on the 2016 Trump presidential campaign, Attorney General William Barr has said he plans to investigate whether or not surveillance on Trump campaign advisor Carter Page was “adequately predicated.” Several opinion writers and commentators have said that those in the intelligence community or federal government, sometimes referred to as “the Deep State,” who may have been involved are increasingly fearful of what Barr might find.

A petition launched Wednesday at whitehouse.gov asks the Justice Department, of which Barr is the head, to “investigate the past president’s Birth Certificate, Selective Service Registration and Social Security number.”