Sara Carter: “The Heat is On” Clapper, Brennan

On Thursday The New York Times and other outlets reported that the “administrative” review being conducted by U.S. Attorney for the District of Connecticut John Durham in conjunction with the U.S. Justice Department under Attorney General William Barr is now officially a “criminal” investigation.

That signifies that Durham can subpoena witnesses, empanel a grand jury, and file formal criminal charges if warranted, Carter and others reported.

“Last night one of the potential subjects of the investigation, who now works at CNN, seemed awfully nervous,” Chaffetz introduced the topic, then played an interview clip between Clapper and CNN’s Anderson Cooper.  “The timing’s interesting,” Clapper told Cooper of the announcement of the new “criminal” focus of the Durham probe against the backdrop of the House of Representatives’ “impeachment” effort against Donald Trump.

Democrats now claim that the Barr-Durham investigation has turned into a “political weapon.” Ironically, many Republicans claim the Obama regime used the intelligence community for just that purpose against the Trump campaign when it opened a counterintelligence probe during the election cycle and did not inform the campaign that Russians were allegedly seeking to penetrate its ranks.

As the Durham investigation continues to garner attention from some in the media, other media outlets are focused on the “impeachment inquiry,” said to be “legal” by Obama-appointed federal judge Beryl Howell on Friday and to justify the release of grand-jury information associated with the 22-month Special Counsel investigation into alleged Trump-Russia “collusion” assumed from the FBI in May 2017.

That probe, conducted by Special Counsel Robert Mueller, was completed this past March, ultimately finding insufficient evidence that anyone from the Trump campaign, or any American, “colluded” with Russia to alter the outcome of the 2016 presidential election.

For months, President Donald Trump’s allies have been raising expectations for prosecutor John Durham’s investigation into the origins of the Russia probe, predicting that he will uncover a deep state plot to stage a “coup” against the president.

Durham “is looking at putting people in jail,” Republican Senator Lindsey Graham told Fox News host Sean Hannity in July. Republican Rep. Jim Jordan said Durham is about to unleash “a pile of evidence” that will “debunk” everything House Intelligence Chairman Adam Schiff has proclaimed for “the last two years.”…

But in the five months since Attorney General Bill Barr tapped Durham to investigate the origins of the Russia probe, and whether any inappropriate “spying” occurred on members of the Trump campaign, he has not requested interviews with any of the FBI or DOJ employees who were directly involved in, or knew about, the opening of the Russia investigation in 2016, according to people familiar with the matter.

A review launched by Attorney General William Barr into the origins of the Russia investigation has expanded significantly amid concerns about whether the probe has any legal or factual basis, multiple current and former officials told NBC News.

Durham has also requested to talk to CIA analysts involved in the intelligence assessment of Russia’s activities, prompting some of them to hire lawyers, according to three former CIA officials familiar with the matter. And there is tension between the CIA and the Justice Department over what classified documents Durham can examine, two people familiar with the matter said. 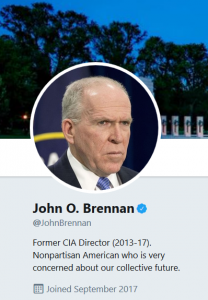 Carter further told Chaffetz Friday that on a recent trip to gather intelligence information, Durham and Barr “were able to hear a recording in Italy in a very closed room, nobody allowed in there, where Joseph Mifsud apparently explains why he believes his life is in danger and why he needs constant security.  There is also information that he was working for Western intelligence, and this is what wraps up John Brennan as well as others like James Clapper into this mess, and that is why they have been really running scared for months now, because they know — the heat is not on ‘impeachment’; the heat is actually on them.”

Mifsud was the individual who in April 2016 alleged to then-informal Trump campaign adviser George Papadopoulos that unnamed “Russians” possessed “dirt” on Hillary Clinton.  The Mueller report claims that Mifsud has “connections to Russia” (p. 5)  while several Republican congressmen say he was working for Western intelligence when he approached Papadopoulos and perhaps before.

Chaffetz then brought in Fox News Legal Analyst Gregg Jarrett, stating, “Clapper tried to put a spin on it, saying, ‘Oh, well, they’re worried about the impeachment’; which one came first?  I think it was this investigation; the Horowitz report’s been in place for more than a year.  How do you take this spin from Clapper?”

DOJ Inspector General Michael Horowitz has produced several reports on the actions of the FBI and Justice Department in relation to the Russia investigation which cited Strzok and former FBI counsel Lisa Page, as well as former FBI Director James Comey, for misconduct and recommending Comey for a criminal review which the DOJ declined to undertake.

In 2013, Clapper was untruthful to the Senate Intelligence Community when he said that the U.S. intelligence community did not “wittingly” collect the communications of average Americans, as revealed three months later by Edward Snowden and then admitted to by Clapper himself.  He was not prosecuted for lying to Congress.

Jarrett is the author of two books on the Russia investigation: “Witch Hunt:  The Story of the Greatest Mass Delusion in American Political History” and “The Russia Hoax:  The Illicit Scheme to Clear Hillary Clinton and Frame Donald Trump.” He responded to Chaffetz that Clapper’s attempt “to deflect blame” and the accusation by various “anti-Trump lawyers, legal analysts” that the Trump Justice Department is investigating “political opponents from the other administration” are “ignoring, hypocritically, that it was the Obama administration’s Department of Justice that launched the investigation of an opposing-party candidate, Donald Trump.”

“Hypocrisy is endemic in Washington,” Jarrett continued, “but I guarantee you this:  it is full employment in Washington right now for criminal defense attorneys as the swamp creature scramble to retain lawyers…They are in deep trouble.”