WHAT IS THE TRUTH? 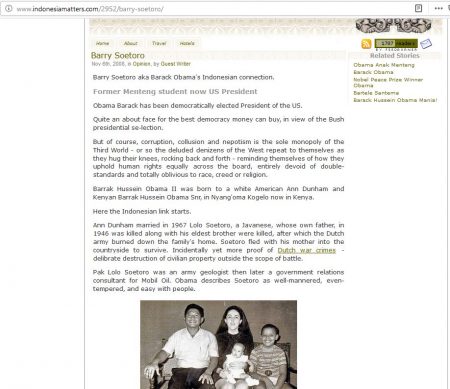 (Sep. 20, 2019) — A blog post at “Indonesia Matters” dated November 6, 2008 states that “Barry Soetoro aka Barack Obama” was “democratically elected President of the US” on that date.

The writer then illustrated what he/she believed to be Obama’s “Indonesia link” by recounting the narrative that as a six-year-old boy, “Obama” relocated to Indonesia with his mother, Stanley Ann Dunham Obama, due to her marriage to Lolo Soetoro, an Indonesian citizen.

As we reported earlier this week, on June 27, 2004, The (Kenya) Sunday Standard declared then-U.S. Senate candidate “Barrack Obama” as “Kenyan-born.”  Subsequent references to Obama’s origins at the same outlet show that Obama’s birth narrative was changed to say he was “born in Hawaii” beginning in 2008.

Our featuring of The Standard‘s article generated much discussion and link-sharing both supporting and refuting the claim of Obama’s “Kenyan” birth.

Between November 2008 and March 2010, several Kenyan officials, including members of Parliament, declared Obama as born in their country, not the United States.

On October 9, 2008, NPR, which receives part of its funding from the U.S. government, reported:

Ofeibea Quist-Arcton, NPR’s Africa-based correspondent, tells why her beat has proved one of the most interesting this year.

She discusses the stories that have been painful and devastating for many nations on the continent such as the violent political fights that have led to power-sharing deals.

She also describes the stories that have been exciting, including the U.S. presidential race of Kenyan-born Sen. Barack Obama.

In a quote from then-Obama campaign spokesman Robert Gibbs reported not only in The Standard but also by Reuters and other U.S. mainstream outlets, Gibbs was noted to have said just before the November 2008 election of Obama’s grandmother, who was said to be terminally ill, “Along with his mother and his grandfather, she raised him in Hawaii from the time he was born until the moment he left for college. As he said at the Democratic Convention, she poured everything she had into him.”

The Standard‘s October 22, 2008 article appears to be largely a reproduction of a Reuters article dated October 20, 2008. Gibbs’s statement as to the timeline of Obama’s grandmother’s care of her grandson is inconsistent with Obama’s publicly-proffered life narrative that he was born in Hawaii, spent four years in Indonesia between the ages of 6 and 10 with his mother and stepfather, and did not live with his grandparents until returning from Indonesia at age 10.

American media has not explained the discrepancy between Gibbs’s statement and Obama’s commonly-told life narrative which includes his alleged time in Indonesia, an item which became the basis for a feature film.

On April 27, 2011, the White House released not only what it claimed was Obama’s “long-form” birth certificate, but also a reproduction of the short-form Certification of Live Birth in a color scheme differing from the original released in June 2008 for which Gibbs later took credit.

On May 18, 2012, The Daily Mail reported, as a result of a Breitbart article published the day before, that Obama’s first literary agent, Acton & Dytel, in 1991 produced a biographical pamphlet describing Obama as “born in Kenya to an American anthropologist and a Kenyan finance minister and was raised in Indonesia, Hawaii, and Chicago.”

Mike Zullo, the lead investigator of a 5+-year probe into the “long-form” image finding it to be fraudulent, has reported that Obama was not present in Hawaii before the age of five but rather, in Indonesia at that age.

Last year Zullo reported that contrary to Obama’s life narrative, it is “an open secret” in Washington, DC that Obama was born outside of the United States and was therefore unable to meet the U.S. Constitution’s “natural born Citizen” requirement for the presidency.

Earlier this week, The Standard did not respond to The Post & Email’s request for comment about its 2004 article in which it described Obama as “Kenyan-born,” nor did the Associated Press, to whom credit is given at the foot of The Standard‘s aforementioned article.

During a public address in 2008, Michelle Obama described Kenya as her husband’s “home country.”

In 2014, NBC journalist Chris Jansing stated Obama was “born in Kenya” in what was later said to be “an epic slip-up” hearkening back to “a claim that has been thoroughly debunked since it first appeared during Obama’s original run for office in 2008.”

In a departure from all other narratives, a June 30, 2008 article in The Washington Post reported Obama as having been “raised in the Kansas heartland.”  The Post, too, failed to respond to our request for comment.

In late 2007, Obama admirer and “Hardball” anchor Chris Matthews claimed that Obama was “born in Indonesia,” echoing a 2006 report from Will Hoover, then of The Honolulu Advertiser.  Both later changed their stories to say that Obama was “born in Hawaii,” with Matthews excoriating anyone, including Donald Trump, questioning Obama’s “natural born” status or suggesting that presidential candidates should provide proof of their birthplace and eligibility in future elections.

On Friday The Post & Email spoke with Zullo about The Standard‘s 2004 proclamation that Obama was “Kenyan-born,” only to alter that claim in 2008.  “It’s of no consequence that he was ‘Kenyan-born’ running for the Senate, so they would say it,” Zullo observed.  “No one has ever said he wasn’t born in Kenya.  They just say he was born in Hawaii.  I never see anybody making the claim; they just do it in a roundabout way.  A parallel situation is that of Ilhan Omar, the Somali-born congresswoman.”

26 Responses to "Multiple Sources Have Reported Obama “Born in Kenya”"