AND WHAT IS THE TRUTH?

(Jul. 30, 2015) — In an article dated July 15, 2007 published in the Rockford Register Star and credited to Jill Lawrence of USA Today, then-presidential candidate Barack Hussein Obama is said to have exhibited “a habit of telling people things they don’t necessarily want to hear on subjects ranging from fuel standards and fatherhood to homophobia and teacher pay.”

Obama declared himself a 2008 presidential candidate on February 10, 2007 in Springfield, Illinois in the company of his wife and two daughters.  “The genius of our founders is that they designed a system of government that can be changed. And we should take heart, because we’ve changed this country before,” Obama said.

In her article, Lawrence quoted then-campaign spokesman Robert Gibbs as having said that Obama would not “pander his way through the race.”  Obama was presented as an advocate of merit pay for teachers and of committed fatherhood beyond “conception.”

“Obama has no choice if he wants to win: He must encounter the assumption that because he’s black, he’ll have a wild progressive agenda,” reported Lawrence, quoting Ronald Walters, Director of the African American Leadership Institute at the University of Maryland.

Lawrence now writes for Business Insider but has also worked for the Associated Press, PoliticsDaily, National Journal, The Atlantic, The Daily Beast, and Al Jazeera America, according to her biography. Her editorials are published by Creators Syndicate, with titles including “Will Hispanics Reject the GOP Once Again?” “What Conservatives Get Wrong on Medicaid,” and “The Donald’s ’47 Percent’ Moment.”  Creators Syndicate classifies her as “Liberal.”

The original July 9, 2007 article, still available at USA Today, describes Obama’s reported “small lapses from the party line” as a phenomenon which might not endear him to black voters.

Toward the end of the piece, Lawrence wrote that “Obama has a history of taking messages directly to the source. Raised by a single mother from the age of 2, when his father went home to Africa,…”

If documents reportedly released by the U.S. State Department are authentic and accurate, Obama Sr.’s student visa was non-renewed in July 1964, necessitating his return to Kenya when his son was just under three years of age.  However, Obama’s public life story is that his mother, Stanley Ann Dunham, remarried in either 1965 or 1967, according to the State Department documents.  In 1967, young Obama allegedly went to Indonesia to join his mother and new spouse, Lolo Soetoro, with a half-sister, Maya, reportedly being born in 1970.

Various conflicting reports of Obama’s life story have been presented, perhaps inadvertently, by Obama and those close to him.  At a campaign event in 2008, Michelle Obama stated that Obama’s mother was “very young and very single” when Obama was born, contrary to the narrative that Stanley Ann Dunham and Barack Obama Sr. were married in February 1961.

Obama Sr. was reportedly already married in Kenya before arriving in the U.S. as a student in 1959 to attend the University of Hawaii.  Bigamy is illegal in the United States.  He reportedly married at least once more and fathered children with at least four women.

In 1990, the Associated Press reported that Obama Sr. attended “Oxford and Harvard,” not the University of Hawaii and Harvard.

In 2006, then-Honolulu Advertiser reporter Will Hoover reported that the younger Obama was “born in Indonesia.”  MSNBC commentator Chris Matthews made the same claim on December 18, 2007 while speculating whether or not then-Obama primary opponent Hillary Clinton would publicize that claim during the campaign.

Obama’s first literary agent, Acton & Dystel, wrote in a printed 1991 biography that Obama was “born in Kenya and raised in Indonesia and Hawaii,” a “fact” that was changed after Obama announced his candidacy for the presidency.  NPR also altered an article which stated that he was born in Kenya to say that his birthplace was Hawaii.

In June 2008, an award-winning Washington Post writer reported that Obama was “raised in the Kansas heartland.”

Obama frequently speaks of his maternal grandparents’ significant role in raising him in Hawaii while his mother was again in Indonesia pursuing a career in anthropology.  In his book, Dreams From My Father, he wrote of an older mentor identified as “Frank” and revealed in a 1995 library presentation as having been Frank Marshall Davis, a communist sympathizer with a sizable FBI file.

During the presentation, Obama spoke of “going back to Kenya.”  In 2008, his wife Michelle described the East African nation as his “home country.”

While Obama and former Hawaii Gov. Neil Abercrombie claim Obama was born in Hawaii, no hospital there has confirmed it, and the images released on the internet purported to be his short-form and long-form birth certificates, respectively, have been found to be fraudulent by a criminal investigation spanning nearly four years.

Trump has also questioned Obama’s failure to release his college application forms, tying them to scholarship monies that Obama might have obtained fraudulently.  Last fall on a Fox News program, Trump claimed that Obama changed his name to Barack Hussein Obama from “Barry Soetoro.”

In 2009, Gibbs claimed that “We put it on the internet,” referring to Obama’s short-form birth certificate, which has also been declared fraudulent.

The U.S. Constitution requires that the president be a “natural born Citizen,” which most Americas believe means, at a minimum, born in the United States.  With a claimed non-U.S.-citizen father, some constitutional scholars have declared Obama ineligible for the presidency, regardless of where he was born.

The media has consistently failed to differentiate between the terms “citizen” and “natural born Citizen,” even though the Constitution uses them differently.

Former CBS News reporter Sharyl Attkisson has related examples of how her former employer allegedly quashed her stories which probed evidence of  corruption within the Obama regime.

The sheriff who tasked his Cold Case Posse with an investigation into Obama’s documentation in September 2011 has been repeatedly sued by Obama’s Justice Department and tried for civil contempt by U.S. District Court Judge G. Murray Snow following Arpaio’s offer of a monetary settlement.  Snow also ordered U.S. marshals to collect 50 hard drives and identification materials which he claimed needed to be turned over to the Justice Department.

Arpaio has also been ridiculed by members of the mainstream media who have called the investigation “nonsense” and asked, “How do you expect any of us to believe any of this?” following a second press conference in which the posse’s findings were detailed and the standard of probable cause of forgery said to have been surpassed.

In September 2008, Obama said in a televised interview that he registered with the Selective Service System (SSS) in 1979, after he graduated from high school.  However, the draft was suspended by President Gerald Ford in 1976, with mandatory registration not resumed until the summer of 1980.

Selective Service registration is required by law for anyone employed by the federal government, including political positions.

Along with the long-form birth certificate, the Cold Case Posse found that Obama’s purported SSS registration form is a “computer-generated forgery.”  Rather than launching an investigation, SSS Director Lawrence Romo, an Obama appointee, advised Arpaio and posse lead investigator Mike Zullo to contact the FBI if they believed a crime had been committed in the form’s creation.

Romo would not permit inspection of Obama’s purported original Selective Service registration form by Zullo or Arpaio.  At approximately the same time as the posse commenced its investigation, Romo announced what appear to be new procedures in the maintaining of Selective Service records, including paper copies and microfilm. 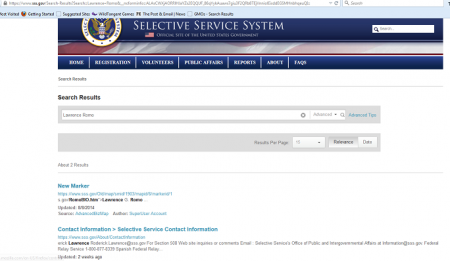 This writer found, during preparation of this article, that Lawrence Romo’s photo and biography are not evident on the Selective Service System’s website as they once were.  A simple internet search for Romo’s information on the SSS website yields a message stating that “The resource you are looking for has been removed, had its name changed, or is temporarily unavailable.”

In addition to reports that Obama was born in Indonesia, multiple African news sources, some quoting the Associated Press, reported that he was born in Kenya. His Kenyan step-grandmother, “Mama Sarah,” was reported to have said that she witnessed Obama’s birth in her country.

Zullo has reported that the airline manifests of foreign flights arriving in the United States from the week Obama was allegedly born are inexplicably missing from the National Archives.

Zullo has also said that “There never was a birth in Hawaii” for Obama.

Approximately 2.5 hours prior to publication, The Post & Email sent the following message to Lawrence and an address provided by USA Today for questions, comments or corrections:

I came across the following article in an archive and then found it online:

in which you wrote:

“Obama has a history of taking messages directly to the source. Raised by a single mother from the age of 2, when his father went home to Africa,…”

According to Obama’s public life story, his mother remarried – two different years of 1965 and 1967 have been provided, according to documents reportedly released by the State Department – and Obama spent four years in Indonesia with his mother, father, and half-sister, Maya.  He was also reportedly raised by his maternal grandparents after returning to Hawaii in 1971.

Did you have access to documentation that perhaps the public has not seen?  Which primary sources did you use to ascertain Obama’s background?

The Post & Email will report if a response from the reporter or her former editor is received.

4 Responses to "What Can Explain Inconsistent Media Reports on Obama’s Life Story?"