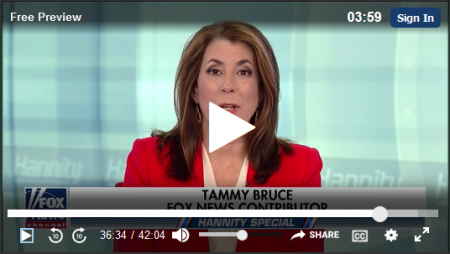 (Nov. 10, 2018) — During Friday night’s edition of “Hannity,” guest Tammy Bruce called the idea that Barack Hussein Obama was not born in the United States “absurd.”

Bruce is a radio show host and writer who frequently appears on the show, which airs weeknights at 9:00 p.m. ET.

Host Sean Hannity’s interview of Bruce and commentator Deneen Borelli took place during the last eight minutes of the show in response to reports of Michelle Obama’s forthcoming book, “Becoming,” in which Obama reportedly wrote that she “would never forgive” Donald Trump for questioning her husband’s presumed United States birthplace. Obama additionally claimed that Trump’s questioning of her husband’s eligibility to serve as president placed her family in danger.

In early 2011, Trump publicly called for the White House to release Barack Obama’s “long-form,” or detailed, birth certificate said to be in the custody of the Hawaii Department of Health (HDOH).

Obama has publicly claimed a birthplace in Hawaii for many years, while at the same time mainstream media sources reported him as born in Kenya or Indonesia.  On a trip to that country this past July, Obama identified himself as “from Kenya.”

The New York Times has criticized Trump for, among a myriad of other things, allegedly “promoting a lie” about Obama’s birthplace and “citizenship,” later labeling him the leader of the so-called “birther” movement.  The mainstream media applied the pejorative to anyone questioning inconsistencies in Obama’s life story and the claim by some that his “short-form” birth certificate, released mysteriously on June 12, 2008 online, is a forgery.

A number of bloggers, writers and private citizens have received threats of physical harm or death as a result of their own questioning of Obama’s eligibility, this writer included.

In August 2011, at the request of 242 constituents, the Maricopa County Sheriff’s Office (MCSO), then led by Sheriff Joseph Arpaio, launched an investigation into the origins of the image.  Eventually spanning more than five years, lead investigator Mike Zullo revealed at a March 1, 2012 press conference that probable cause existed to believe the birth certificate image a “computer-generated forgery.

In an August 29, 2018 opinion piece, New York Times writer Michelle Cottle called out Arpaio for having “embraced the racist birther movement more energetically than most, starting an investigation aimed at exposing President Barack Obama’s American birth certificate as a forgery.”  Arpaio has filed a multi-million-dollar lawsuit over the piece, claiming The Times libeled him by calling him “a truly sadistic man” and other terms which could damage his reputation.

The column suggested by omission that Arpaio’s first claim of the forgery Obama’s documents occurred in December 2016, after he lost his bid for a seventh term as Maricopa County sheriff.

Responding to Bruce’s “absurd” comment, Hannity expressed his sentiment that after Trump began questioning Obama’s eligibility, Obama should have “just released it” in an apparent reference to the long-form birth certificate.

Bruce did not cite why she believes that the possibility of Obama’s having been born outside of the United States is unsupportable.

On the evening of March 1, 2012, Hannity was scheduled to interview Zullo until Hannity’s producers canceled the interview at the last minute.  Hannity has since admitted that “the media never vetted” Obama.

At the initial presser, Zullo reported that he possesses affidavits from media figures who received credible threats of harm as a result of their initial research into Obama’s background.

Throughout the probe, the press was strangely incurious and declined to investigate further, while members of Congress continued to attempt to explain to their constituents why Obama was eligible to serve as president. As legal analyst Joseph DeMaio has reported over the years, the Congressional Research Service (CRS) omitted crucial wording from cited case law in an apparent effort to convince lawmakers that Obama met the eligibility criteria for the presidency.

Article II, Section 1, clause 5 of the U.S. Constitution requires that the president and commander-in-chief be a “natural born Citizen,” a term the U.S. Supreme Court has not defined in modern history.  While legal and constitutional scholars often disagree on its meaning, Americans generally interpret it to mean, at a minimum, “born in the United States.”

Obama’s claimed father was a British, and later Kenyan, citizen, while he claims his mother was Stanley Ann Dunham, a U.S. citizen born in Kansas.

Since Obama left office, news anchors, pundits and politicos continue to invoke the “Birther” controversy.  Interestingly, the “Hawaii” birthplace claim has been increasingly replaced with “born in the United States.”

The Times and other mainstream outlets made much of Trump’s pronouncement late in his presidential campaign that Obama “was born in the United States, period.”  Last year, however, The Times reported that according to its sources, the issue of Obama’s eligibility remains important to the 45th president.

In a radio interview in August, Zullo told host Carl Gallups that “It has been an open secret in the intelligence community and DC that Obama could never satisfy the constitutional requirement of being born on American soil.”