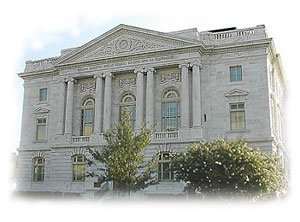 EDITOR-IN-CHIEF PRACTICED LAW IN FEDERAL DISTRICT AS JUDGE LAND, INFAMOUS SANCTIONER OF ORLY TAITZ by John Charlton (Feb. 13, 2010) — Many Republicans are outraged following the discussion ban of the eligibility question imposed yesterday by the Editor-in-Chief of Redstate.com, a leading Republican News Blog published from Washington, D.C. Eric Erickson justified his action in […]

Major Cook appeals to the 11th Circuit in Atlanta

DR. TAITZ’S BRIEF EXPLAINS INJUSTICE OF CLAY D. LAND’S RULING by Sharon Rondeau (Dec. 9, 2009) — On December 7, 2009, Dr. Orly Taitz, attorney for Major Stefan Cook, has filed an appeal to her case Cook v. Good with the Eleventh Circuit Court of Appeals in Atlanta, Georgia. The briefs were received by the […]

THE VALIANT DEFENDER OF AMERICA NOW URGENTLY NEEDS YOUR HELP! by John Charlton (Nov. 13, 2009) — Federal Judge Clay D. Land, ever vindictive, has ordered the Attorney General to take the necessary steps to seek the sum of $20,000 from her.  In September, Land sanctioned Attorney Taitz for her political views, expressed in her […]

AMICUS CURIAE FILING EXPOUNDS UNCONSTITUTIONALITY OF SENDING $20,000 SANCTION TO NON-PROFIT by John Charlton (Oct. 28, 2009) — In a filing which is anything but what its name means (Amicus curiae = “friend of the court”), Victor M. Serby of Woodmere, NY, has sent Judge Clay D. Land a scathing legal rebuke for the latter’s […]

“Now being a person of integrity means that you worry about dotting i’s and crossing t’s, while the Federal government is overthrown and the national treasure is ransacked by thieves.” (How the Wise have become Foolish) by John Charlton There is no more blinding anger than that which rises in the mind of the self-righteous. […]

SANCTION RULING WILL MAKE ORLY ONLY THE MORE DETERMINED ! by John Charlton (Oct. 13, 2009) — The Post & Email has just received this personal reaction, to Land’s Sanction Order, from Mr. Charles E. Lincoln III, Dr. Taitz’s assistant: I would point out that in Cohens v. Virginia, decided by the U.S. Supreme Court […]

PERSONAL VENDETTA AGAINST TAITZ RATCHETS UP by John Charlton (Oct. 13, 2009) — In a clear sign of a personal vendetta, Federal Judge Clay D. Land has sanctioned Dr. Orly Taitz, esq., $20,000 for her spirited defense of Captain Connie Rhodes, M.D., U.S. Army, in the case Rhodes vs. Mac Donald et al. The 43 […]

Was U.S. Attorney General secretly in town to counsel Land?

PRESENCE CITED AS MATERIAL FACT TO EX-PARTE DISCUSSIONS TO SWAY LAND by John Charlton (Oct. 3, 2009) — It boggles the mind, that for an obscure case in the Middle District of Georgia, Federal Court, involving a lead counsel who has been derided from one end of the nation to the other as a nut, […]

Cardona defends his Motion to Dismiss, against Taitz

RENEWS ARGUMENTS FROM HIS ‘MANIFESTO OF TYRANNY’ Summary and Commentary by John Charlton (Sept. 25, 2009) — Acting Attorney General George S. Cardona, lead counsel for the defense in the case Captain Pamela Barnett et al. vs. Obama et al., has replied to Dr. Orly Taitz’s Opposition Brief to his own Motion to Dismiss. His Memorandum […]

CITIZEN JOURNALIST AND OBAMA FOE OUTS THE SCAM by John Charlton (Sept. 19, 200) — In a stunning series of events, the Federal Court in Columbus, GA has been the target of criminals engaging in fraud and forgery, in the matter of the so-called Letter of Connie Rhodes, asking Judge Land not to accept any […]

DEMANDS DR. TAITZ TO EXPLAIN WHY HE SHOULD NOT IMPOSE SANCTIONS by John Charlton (Sept. 19, 2009) — Yesterday Judge Clay D. Land, in the U.S. District Court-Middle Division of Georgia, issued his order rejecting the request for Emergency Stay pending a Motion for reconsideration, in Rhodes vs. Mc Donald. In her filing for the new Emergency stay, […]