SPEAKING OF THE “MAINSTREAM MEDIA”… 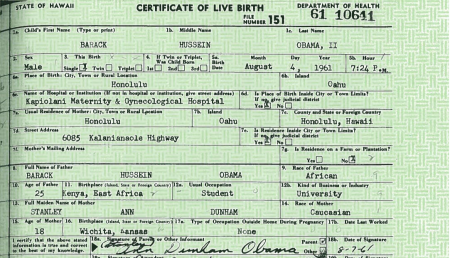 (Jun. 4, 2019) — Late Tuesday afternoon, The Post & Email noted that a reader from the Fox News Channel opened our second article on Friday night’s “Freedom Friday” radio show in which host Carl Gallups made a number of striking revelations.

Since 2012, Gallups has closely followed and reported on what became a 5+-year probe into the “long-form” birth certificate image posted at whitehouse.gov in 2011 said to represent Barack Obama’s original birth record form Hawaii.

In November, lead investigator Mike Zullo said that high-ranking White House officials received a “cursory briefing” on the evidence gathered from the probe which declared the “long-form” image a “computer-generated forgery” after six months of investigation.

During the second half of the show, Gallups said, referencing the birth certificate evidence:

Earlier in the show, Gallups drew connections between government surveillance reported to Zullo and then-Maricopa County Sheriff Joseph Arpaio by a confidential informant; the report produced by Special Counsel Robert Mueller on Russian election interference and alleged “collusion” with members of the Trump campaign; and the long-form birth certificate image.

Gallups claimed that the “hacking” attributed to Russian operatives by Mueller’s team was not conducted by Russians, but rather, by U.S. intelligence agencies using software with the ability to alter origination IP addresses designed by the confidential informant, Dennis Montgomery, when he worked for the NSA and CIA.

As with the entire mainstream media complex, Fox News Channel has avoided the topic of the forgery other than for satirical or ridiculing comments or pejorative references to “birthers.”

Greg Gutfeld, a co-host of “The Five,” which airs weekdays at 5:00 p.m. ET, has jocosely referred to Barack Hussein Obama more than once as “Kenyan-born,” which, in fact, was reported by the AP in 2004 as Obama sought a seat in the U.S. Senate.

Gutfeld has placed the “fakeness” of the birth certificate image in the category of “conspiracy theories.”

Article II, Section 1, clause 5 of the U.S. Constitution requires that the president and commander-in-chief be a “natural born citizen,” which most Americans understand to mean, at a minimum, “born in the United States.”

In addition to the Associated Press, NPR, the Honolulu Advertiser, and several other sources reported Obama as having been born in the country of Kenya or Indonesia and not the state of Hawaii.  A 1991 biography prepared by Obama’s then-literary agent stated that he was “born in Kenya and raised in Indonesia and Hawaii.” After Breitbart revealed the promotional brochure in which the biography appeared, the literary agent, now working at a different firm, claimed that the discrepancy was “nothing more than a fact checking error by me.”

Even with that discovery, Breitbart prefaced its reportage with a “Note from Senior Management” stating:

Andrew Breitbart was never a “Birther,” and Breitbart News is a site that has never advocated the narrative of “Birtherism.” In fact, Andrew believed, as we do, that President Barack Obama was born in Honolulu, Hawaii, on August 4, 1961.

Yet Andrew also believed that the complicit mainstream media had refused to examine President Obama’s ideological past, or the carefully crafted persona he and his advisers had constructed for him.

It is for that reason that we launched “The Vetting,” an ongoing series in which we explore the ideological background of President Obama (and other presidential candidates)–not to re-litigate 2008, but because ideas and actions have consequences.

It is also in that spirit that we discovered, and now present, the booklet described below–one that includes a marketing pitch for a forthcoming book by a then-young, otherwise unknown former president of the Harvard Law Review.

It is evidence–not of the President’s foreign origin, but that Barack Obama’s public persona has perhaps been presented differently at different times.

At a final press conference on the investigation held on December 15, 2016, Zullo reported that two forensic analysts working separately, unaware of each other, and located on different continents examined the birth certificate image and reached similar conclusions to his own.  As a local Fox affiliate broadcast the presser in real time, one of its assigned reporters said, “We also know this is being picked up by Fox News Channel. They’re watching this as well, so this is going national whatever we’re going to find out…”

Contrary to the reporter’s prediction, FNC pushed back against the allegations of fraud and forgery on several subsequent occasions.   When Arpaio raised the issue with Judge Jeanine Pirro early last year, Pirro quickly said the issue was “solved” and attempted to return to the initial discussion of a “missile alert” sent in error to approximately one million Hawaii residents and to the topic of “immigration.”

On her show one week before, Pirro had herself raised the subject of “a long-form” to a Democratic strategist.  On January 14, 2018, The Post & Email reported, “Although last week Pirro asked Democrat strategist David Goodfriend on-air if he had ‘ever seen a ‘long-form,’ clearly taking him by surprise and sending him into peals of nervous laughter, she was clearly unwilling to discuss the investigation that Arpaio commissioned which determined early on that the birth certificate image is a ‘computer-generated forgery.’”

In April, Zullo said he discovered “collusion with media executives” “not to talk about the birth certificate.”

Last August, Zullo reported that two U.S. intelligence agents informed him that it is “an open secret” in Washington, DC that Obama was born outside the United States.

We’ve caught, let me just say, other American intelligence agencies…through an informant that built the software. Mike Zullo traveled to Washington, DC, talked to two insiders in the intelligence community that he’s known for a long time…who said, “Yes, the guy who’s talking to you built that software, and yes, he knows what he’s talking about, and yes, it is used to hack into anywhere they want to.”  He also showed Mike Zullo how that same software was used to hack into Hawaii Department of Health and the historical records at the University of Hawaii, and then a few weeks later, oop! magically appears a long-form birth certificate which we now know was built from the ground up, and those urls, Mike Zullo revealed, came from the CIA using the hacking material and sent it through CIA urls…