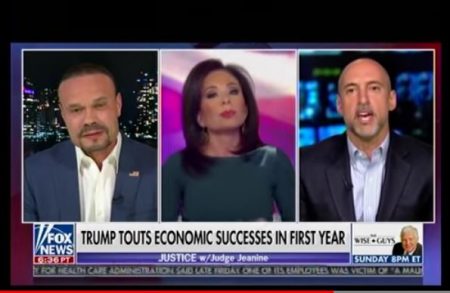 (Jan. 8, 2018) — On Saturday evening’s edition of FNC’s “Justice with Judge Jeanine,” former Westchester County, NY District Attorney and judge Jeanine Pirro asked one of her guests whether or not he had “ever seen a ‘long-form,'” undoubtedly referring to the “long-form birth certificate” of former White House occupant Barack Hussein Obama.

Article II, Section 1, clause 5 of the Constitution requires that the president be a “natural born Citizen,” which most Americans interpret to mean, at a minimum, “born in the United States.”  During Obama’s 2007-2008 presidential campaign, credible news reports stated his birthplace as Indonesia and Kenya, some of which were later altered to say that Obama was “born in Hawaii,” as he claims.

At 5:19 in the video clip from the show, Pirro vehemently but possibly unwittingly opened the line of conversation by telling Goodfriend that she thought it was “bonkers” that Obama had called Trump a “quasi-Adolph Hitler” in a speech in Chicago last month.

At 5:28, Goodfriend responded, “It’s almost as ‘bonkers’ as Donald Trump saying that Obama was never a citizen,” referencing Trump’s 2011 public demands for the Obama White House to release his “long-form,” or more detailed, birth certificate to prove his eligibility to serve as president and re-seek the office in 2012.

As has often been the case, Goodfriend conflated the term “citizen” with “natural born Citizen,” a distinction set forth in the Constitution only for the nation’s chief executive.  Article I states that members of the U.S. House of Representatives and U.S. Senate must be “citizens” and residents of the states whose citizens they represent in the Congress.

It is possible, through U.S. naturalization law, for an individual to be a U.S. citizen even if he or she was born in a foreign country, as in the case of parents serving in the U.S. military or in diplomatic service at the time of the birth.  Many U.S.-citizen births take place overseas even if a parent or parents are non-government employees residing in a foreign country provided that they meet U.S. residency and citizenship requirements in order to confer their U.S. citizenship to their child.

In the early months of 2011, prior to the release of the long-form birth certificate image, Trump had based his demand to see Obama’s original birth record on his belief that “If you are going to be president of the United States you have to be born in this country.”

Any serious discussion of Obama’s birthplace, and possibly by extension, his eligibility, has been considered off-limits by all mainstream media outlets, particularly after the “long-form” birth certificate image posted at whitehouse.gov on April 27, 2011 bearing his name was deemed a “computer-generated forgery” by a criminal investigative team working under the authority of then-Maricopa County Sheriff Joseph M. Arpaio.

Former New Jersey detective Mike Zullo, who then headed Arpaio’s “Cold Case Posse,” was the lead investigator on the case, which began four months after the image was released to the public with much fanfare and concluded in December 2016, as Arpaio was completing what would be his sixth and final term as Maricopa County sheriff.

At a press conference held on December 15, 2016, Zullo revealed that his conclusions that the long-form image is a “computer-generated forgery” were supported by two outside forensic analysts based on what were found to be “nine points of forgery” copied and lifted from the birth certificate of a woman born in Hawaii later in August 1961, the same month Obama purports to have been born at the Kapiolani Medical Center for Women & Children.

The media, including FNC, declined to report on Zullo’s final presser, and outlets such as the AP simply appeared to be relieved that the birth certificate probe would soon be “concluded.”

Early last month, December, Zullo noted that since the closure of the investigation a year before, when the “birth certificate” issue now arises in the media, it is almost always at the instigation of a left-leaning commentator.  “Why do they keep bringing this up?” he rhetorically asked “Freedom Friday” host Carl Gallups.

“Did you ever see a long-form?” Pirro fired back at Goodfriend in response to his “bonkers” claim about Trump.  “Are you being serious right now?” Goodfriend asked, laughing almost hysterically.  “I’m just askin’ ya,” Pirro twice stridently retorted as Bongino waited quietly to be brought back into the fray.

Goodfriend did not ultimately answer the question.

In extensive recent interviews, Zullo has indicated that the alleged paper copies of the “birth certificate” distributed to reporters before the unveiling of the PDF image nearly seven years ago were nothing more than photographs of the image which were found to have unexplained anomalies among them.

9 Responses to "Fox News Program Host: “Did You Ever See a Long-Form?”"