BUT WHERE HAS HE BEEN FOR THE LAST FIVE YEARS? 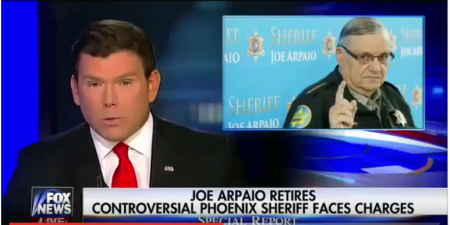 (Jan. 3, 2017) — On Monday night’s edition of Fox News’s “Special Report,” host Bret Baier reported that former Maricopa County Sheriff Joseph Arpaio was “off the job tonight,” depicting Arpaio as having attended a party in his honor in civilian clothing.

Identifying Arpaio as a “metro Phoenix” sheriff, Baier also did not immediately clarify that Arpaio was not reelected to a seventh consecutive term as Maricopa County Sheriff on November 8, 2016, as he was defeated by former Phoenix police officer Paul Penzone.

As did Jacques Billeaud of the Associated Press the same day, Baier highlighted Arpaio’s controversial jail practices and Arpaio’s view that federal immigration law should be strictly enforced.

The third point Baier mentioned of Arpaio’s career involved his commissioning of an investigation into the long-form birth certificate image posted on the White House website on April 27, 2011 which ultimately spanned five years, culminating in a final press conference on December 15, 2016 which reinforced Arpaio’s earlier announcements that Obama’s only publicly-proffered documents are forgeries.

Fox News has maintained a complete blackout of the investigation, launched in August 2011.  In 2012, Arpaio and his lead investigator held two press conferences in which they demonstrated that the investigation had shown that the birth certificate image is a “computer-generated forgery.”

Arpaio’s Cold Case Posse, which conducted the investigation from start to finish at virtually no cost to taxpayers, also found Obama’s Selective Service registration form to be fraudulent, after which Selective Service System Director Lawrence G. Romo refused Arpaio and and lead investigator Mike Zullo access to the original or a certified copy thereof. In fact, Romo implied that in a change of protocol, any microfilm of records from Obama’s registration era had been destroyed.

As with the Associated Press and other mainstream outlets, Baier did not provide any information from the final presser on December 15 revealing that two document examiners from two different disciplines arrived at the same conclusion: that the anomalies found in the Obama birth certificate image which exactly replicate nine items from a long-form birth certificate belonging to a woman born in Hawaii the same month and at the same hospital claimed by Obama could not have been reproduced by chance.

Baier instead reported that “the president and the White House” called the posse’s findings “ridiculous,” even though neither Obama nor the White House has issued a public response to the conclusions reached by investigators.  Baier then reiterated that President-Elect Donald Trump, who Baier said “launched his own investigation” into the birth certificate image, “has said the president was born in the United States.”

Obama’s birthplace has never entered into the investigation, but the crime of forgery of government documents has.

A fourth item reported by Baier is that Arpaio was “charged with a crime” before he left office Without providing any context. In May, U.S. District Court Judge G. Murray Snow declared Arpaio in civil contempt of court and referred a criminal charge of contempt to the U.S. Department of Justice for prosecution. A trial in the case is set to begin on April 4, although Arpaio’s legal team has appealed the civil contempt finding to the Ninth Circuit Court of Appeals on the basis that Snow allegedly conducted improper ex parte communications with several parties and had a longstanding conflict of interest.

Although Baier is evidently aware that the investigation has been ongoing for five years, his report begs the question as to why he and his Fox News colleagues did not report the posse’s findings as they were announced beginning in March 2012 or launched their own independent investigation to discover the truth.