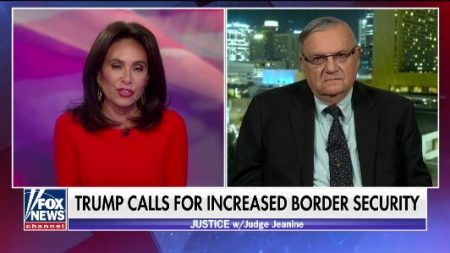 (Jan. 14, 2018) — On Saturday night’s edition of “Justice with Judge Jeanine,” host Jeanine Pirro erroneously stated that the question of a falsified “long-form” birth certificate purportedly issued by the state of Hawaii on behalf of Barack Hussein Obama had been “solved.”

The segment began by showing a clip of President Donald Trump expressing optimism that Congress will address the “DACA” issue dealing with illegals now in their 20s and 30s who were brought to the U.S. as children by family members.  The DACA program, instituted by Obama by executive action, is set to expire on March 5, with Trump urging Congress to pass an immigration bill encompassing a number of his initiatives as well as the “Dreamers,” a term often used by Democrats for DACA recipients.

Trump is now not as optimistic as he was last week when he held an on-camera bipartisan meeting with congressional leaders about immigration, DACA and border security.

After Arpaio’s opening statement, Pirro asked Arpaio what he believed led up to the issuing of a false missile alert sent to more than 1 million Hawaii residents’ cell phones just after 8:00 AM Hawaii time on Saturday. In response, Arpaio said that Hawaii state government “can’t even solve that case” of a “fake, fraudulent government document,” clearly referring to the “long-form” image posted at whitehouse.gov in April 2011 bearing the name “Barack Hussein Obama II.”

Although last week Pirro asked Democrat strategist David Goodfriend on-air if he had “ever seen a ‘long-form,'” clearly taking him by surprise and sending him into peals of nervous laughter, she was clearly unwilling to discuss the investigation that Arpaio commissioned which determined early on that the birth certificate image is a “computer-generated forgery.”

At each of three press conferences given during the 5+-year investigation, Arpaio remarked with incredulity at the lack of media interest in what he viewed as a “national security” threat.

In addition to a media blackout, neither Congress nor the FBI would launch an investigation into the findings.

Pirro attempted to steer Arpaio back to the fake missile alert, but he continued to stress that Hawaii had not addressed the “phony” birth certificate image which reportedly emanated from its Department of Health.

In response, Pirro insisted falsely that the “‘long-form’ was filed” and that “they did solve that, and I’m going to keep pushing back on that.”

She then changed the subject from Hawaii back to immigration and border security.

Along with all other national mainstream media, the Fox News Channel (FNC) has been unwilling to televise and/or discuss the results of the investigation or conduct its own probe into investigators’ conclusions, which included the reported forgery of Obama’s Selective Service registration form as well as the long-form birth certificate image.

Since announcing his Senate run on Tuesday, Arpaio appeared on CNN with anchor Chris Cuomo, which generated a number of mainstream news articles containing erroneous information about the investigation.

On Wednesday, Arpaio appeared in a radio interview with WABC‘s Rita Cosby, to whom Arpaio suggested that multi-billionaire and left-wing political activist George Soros worked to defeat him in his 2016 bid for a seventh term as Maricopa County Sheriff not because of his policies, but because of the evidence his office gathered about the birth certificate image.

Arpaio’s lead investigator on the birth certificate probe, Mike Zullo, has recently said in a string of interviews that Arpaio is determined to have the evidence reviewed by federal authorities who are in a position to take action.