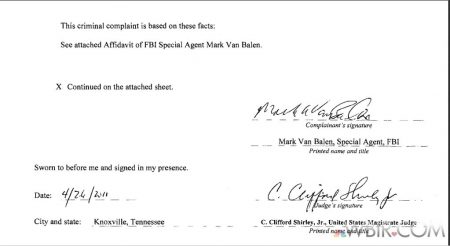 (Feb. 10, 2018) — On Thursday, The Post & Email published the first in what will be a series of articles emanating from an interview with LCDR Walter Francis Fitzpatrick, III (Ret) resulting from a meeting with his congressman’s staffer in Athens, TN on Wednesday.

Fitzpatrick’s interaction with Maxine Gernert of Rep. Chuck Fleischmann‘s district office took place following Gernert’s suggestion that Fitzpatrick assemble a document package which he said he had in his possession detailing government, and specifically FBI, corruption.

“I sent her an email at 12:22 that afternoon with the Van Balen sworn statement and went in two hours later to deliver the documents,” Fitzpatrick told us in an interview on Thursday.

In regard to recent revelations about the apparent political motivations of high-ranking FBI and DOJ officials to obtain a surveillance warrant from the FISA court in 2016 on then-Trump informal adviser Carter Page, Fitzpatrick told Gernert and later, this writer, that the “same tactic” was used in April 2010 to obtain an arrest warrant for Navy veteran Darren Wesley Huff.

According to a four-page memo released on February 2, 2018 authored by the Republicans on the House Permanent Subcommittee on Intelligence (HPSCI), then-FBI Director James Comey, his deputy and others within the FBI and DOJ signed surveillance applications using the unverified “Trump dossier” as their most significant piece of evidence for obtaining a warrant for Page’s communications.

Democrats claim that the Republican memo contains “distortions and inaccuracies.”  On Friday, President Trump declined to declassify the Democrat-authored memo, claiming that it contains “national security” information that cannot be made public.

In 2010, current “Russia” investigation Special Counsel Robert Mueller headed the FBI and presided over what Fitzpatrick has termed “The Madisonville Hoax” which gave rise to the presence of hundreds of law enforcement officers, including Van Balen and other FBI agents, on April 20, 2010 in the small town of Madisonville in Monroe County, TN.

On April 19 and the morning of April 20, 2010, false threats were called in to then-Madisonville Mayor Allan Watson’s office claiming that “Huff and Fitzpatrick had planned to ‘take over the courthouse’ by violence.”

After the fact, a number of outlandish articles were published, based on mainstream news sources, supportive of the government’s narrative, while mainstream articles on the events that day have, for the most part, disappeared.

“There was no such plan. The government made it all up,” Fitzpatrick has responded on a number of occasions.

In 2012, Huff and Fitzpatrick were depicted as “Sovereign Citizens” in a law-enforcement DVD training program funded in part by an arm of the U.S. Justice Department and conducted in conjunction with “fusion centers” throughout the country working with the FBI.

In his probable-cause affidavit, Acting Supervisory FBI Special Agent Mark Van Balen said he accepted the word of unnamed “law enforcement officers” that “HUFF and several individuals were in the possession of openly displayed and concealed firearms and were at the time present outside the Madison County General Sessions Court located in the Beecher Witt Government Building” on April 20, 2010.

Fitzpatrick’s arraignment hearing took place at a “trailer park” courthouse that day, and according to eyewitnesses, Huff was never in the area of the building.  Many would-be eyewitnesses to the hearing were, in fact, not allowed entrance to the hearing after having been greeted by heavily-armed “law enforcement.”

Corruption in Eastern Tennessee has been extensively documented by Fitzpatrick and many others who have been victimized by judicial, prosecutorial and law-enforcement malfeasance which the mainstream press is loathe to report.

Van Balen additionally provided an incorrect date for the citizen’s arrest Fitzpatrick attempted to carry out against then-Monroe County grand jury foreman Gary Pettway, which occurred on April 1, 2010, not April 2.

The name of the county in which the event allegedly took place, as stated in Van Balen’s affidavit, is incorrect; the town of Madisonville is located in Monroe County in East Tennessee, while Madison County is in West Tennessee.  A local mainstream report, while correct about the date of the citizen’s arrest, misidentified the town as “Madison.”

Huff, who was arrested ten days later, had never approached the courthouse nor been armed with any type of firearm while having breakfast at a diner two-tenths of a mile away.

In a column published December 3, 2017, Fitzpatrick contended that the documentation he has of “The Madisonville Hoax” “undoes Mueller.”

“We have as much dirt on Robert Mueller and his criminal conduct in 2010 that we’re finding out about now with the current ‘luminaries’ of the FBI — McCabe, Comey — before them came Bob Mueller,” Fitzpatrick told The Post & Email on Thursday, linking the “Hoax” to the Russia investigation.

“Mueller needs to be placed under arrest,” Fitzpatrick said on Thursday, “because of the precedent set as articulated in the ‘GOTCHA’ broadcast,” referring to a May 22, 2012 FBI interview in which FBI agent Scott Johnson took obvious pride in Huff’s conviction and prison sentence as a “militia extremist.”

“This case is monumental to the FBI because it will set precedent for case law in future domestic terrorism cases throughout the United States,” Johnson told FBI interviewer Mollie Halpern.

Last July, Fitzpatrick filed a treason complaint against Mueller which has received no response.

Fitzpatrick said that while speaking with Gernert and Intern Meera Patel on Wednesday morning in Rep. Fleishcmann’s district office, Gernert said that Fitzpatrick’s credibility is questioned because of his 1990 court-martial and the 2014 felony conviction for which he was unlawfully imprisoned for 27 months in Tennessee state prison.  Gernert then reportedly said, “People aren’t listening because it’s you.  Why don’t you bring me a package?”

Fitzpatrick explained to Gernert that the 1990 court-martial Rear Admiral John Bitoff’s vendetta targeting Fitzpatrick, betrayed by Bitoff’s creation and official filing of a known forgery of his signature on a false “confession letter” which he recently discovered filed in the National Archives on Tuesday, February 6.  “I’ve been trying to get that overturned for approaching 30 years,” Fitzpatrick said he told Gernert.  “There’s a forgery involved, and Admiral Bitoff is a criminal.”

Responsive to Gernert’s suggestion, Fitzpatrick assembled a variety of documentation to include two declarations by a handwriting expert that the forged signature of his misspelled name on the confession letter, which also was missing the generation suffix (III) Fitzpatrick always uses formally, was not his handwriting.

Also included were the July treason complaint against Mueller and documentation about “The Madisonville Hoax.”

Fitzpatrick returned to Rep. Fleischmann’s office with the document package at 1:45 p.m.

“I brought the sworn Van Balen affidavit and a copy of the ‘Sovereign Citizen’ DVD,” Fitzpatrick told us.

Fitzpatrick additionally included a CD recording of the FBI “GOTCHA” broadcast and a separate CD recording of one of “resident” Obama’s White House attorneys” and “The Fogbow.” For fully three weeks prior to April 20, 2010, “Fogbow” members called in uncounted false alerts to state and federal law enforcement officers and various government officials warning that Huff and Fitzpatrick were extremist militiamen about to assault the Beecher Witt Courthouse in Madisonville.

The Post & Email’s article detailing that development and others is subtitled, “WHEN POLITICAL ACTIVISM BECOMES CRIMINAL ACTIVITY.”

“I gave Gernert the archived forgery; I gave her a copy of the July 26, 2017 treason complaint naming Mueller, which, by the way, has my signature at the end of it with a notary, a witness, and looks completely different from the one that’s forged.”  Fitzpatrick included a copy of the September 5, 1997 internal NCIS memo which stated that if Fitzpatrick were to prove that his signature had been forged, “it makes the Navy look really bad.”

“I gave her evidence that Mueller is a criminal,” Fitzpatrick said.  “I gave her evidence that what Mueller is doing now is exactly the same thing he was doing back in 2010.  I told her that I’m tired of this dark cloud over my head because of the court-martial.  ‘I want the forgery removed from this federal record,’ I told her, ‘which, by the way, undoes the court-martial.'”

“Congressman Fleischmann needs to act; he needs to come forward and put out this information,” Fitzpatrick said he further told Gernert during what became a 30-minute meeting.  “Putting a known criminal instrument into a federal record is a crime.”

When Gernert finished her call, according to Fitzpatrick, she asked, “Why are you here?”

“I have the package you asked me for this morning,'” Fitzpatrick told us he said, to which Gernert replied, “Just leave it at the door.”

She didn’t want to take this information from me, and she didn’t know what I had in my hand at the time.  These were not a lot of documents, but they were kill-shots about the forgery.  I told her that Fleischmann could remove that cloud from over me so that people start listening to what I have to tell them.

I didn’t go into the grand jury information, although I could have.  The conviction that locked me up for 27 months did not use a proper grand jury, and information that was used against me was falsified as well.

In regard to the Van Balen statement, the FBI knows that I put Gary Pettway under citizen’s arrest because he was an imposter grand jury foreman.  The FBI and Department of Justice later called someone who was reported as an illegal grand jury foreman — Pettway — to testify against Darren Huff.

This is exactly what Dinesh D’Souza is saying was done to him.

Obama, [Eric] Holder, and then-DHS Secretary Janet Napolitano were “pathfinders” to put down veterans and other citizens through the MIAC report and Operation Vigilant Eagle who were trying to stand up against a corrupt government, criticizing Obama because he’s a foreign-born domestic enemy.

Editor’s Note: Further details about Gernert’s unusual response to Fitzpatrick’s documentation will be detailed in a continuation to this series to be released in the near future.

One Response to "Fitzpatrick Details Mueller’s “Criminal Conduct,” Then and Now"