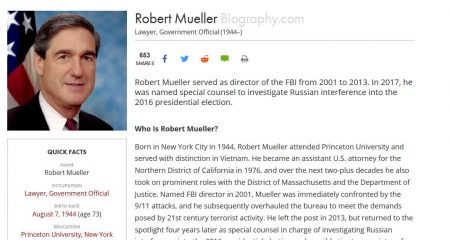 (Dec. 3, 2017) — On Friday, Gen. Flynn took a guilty plea for lying to the FBI as a result of his contacts with the then-Russian ambassador, Sergei Kislyak.

Mueller is going after Trump.  This fact was written about in the treason complaint in July, and we can see it unfolding now.

Today I called Rep. Marsha Blackburn‘s office and spoke with her assistant, Stephanie Scott, and I said, “The congresswoman needs to go after Mueller, and it’s because of what Mueller did here in East Tennessee back in 2010 continuing to this day.”  I gave her a run-down much the same as I did the other night with Pastor Butch.

I told her, “Marsha Blackburn can rise up and become a hero in this country by taking down Mueller because Mueller is going after President Trump.  I don’t know how far he’s going to get, but that’s what he’s trying to do tonight.  Everything he’s doing is fruit of the poison tree, because Mueller’s not allowed to be involved in this investigation, and if that were addressed, the forced plea deal that Flynn took would go away.

As I’ve said before, Mueller’s actions, including Darren Huff’s conviction, cannot stand.  It was a thought crime.  Darren wasn’t at that location, he didn’t have a gun, and Mueller prosecuted Darren while working shoulder-to-shoulder with Eric Holder, the AG, and Janet Napolitano of Homeland Security, and of course, Resident Obama.

There was the treatment of veterans in Operation Vigilant Eagle; there’s Brandon Raub.

Mueller needs to be brought down as a dirty cop.  Mueller is involved in a lot of things that people are reporting about now as a dirty cop.  He cannot be relied upon.  He makes things up.  Mueller is a liar, a monster, a miscreant.  He is a sewer-dweller to the nth degree.  His conflicts of interest alone — and I said this in the treason letter — Mueller should have been the first person to say, “I can’t do this work; I’m conflicted.”  But here he presses on, and now he has Flynn on the hook. He has George Papadopoulos, Gates and Manafort.

All of this is fruit of a poisoned tree. It cannot stand. It needs to be called out, and Marsha Blackburn is in a position to do it.

She could change this entire dynamic.  As a Tennessee politician, Blackburn stands out because she is angling to take over (Sen.) Bob Corker’s seat.

I’ve reached out to the Freedom Caucus, including Rep. Ron DeSantis, who was a Navy JAG; Trey Gowdy…I’ve called these offices and said to them over the course of the past year, “Mueller is a criminal,” and I haven’t gotten anything back.

One guy who is a major disappointment is Jeff Sessions.  He has to go.  [Deputy Attorney General Rod] Rosenstein is as dirty as Mueller, [former Acting FBI Director Andrew] McCabe, and [former FBI Director James] Comey.

There’s a treason complaint naming Mueller going back to July, and Sessions has that.  There is U.S. Attorney Dana Boente, who has submitted his resignation but is still there; he has the complaint.

Blackburn is in a position to act. This happened in Tennessee.  We talked about the precedent that Mueller set when Mueller manufactured the first “domestic terrorist” event in the country here in Tennessee and then pulled off the first thought-crime prosecution, arrest and incarceration.  And this undoes Mueller.

7 Responses to "Fitzpatrick: “This Undoes Mueller”"