The crime of treason against the United States is laid out in Article III, Section 3, clause 2 of the U.S. Constitution and was determined by the Framers to be punishable by death upon conviction.

The Post & Email can report that a group of Obama supporters at “The Fogbow” includes an attorney working in the White House by his own admission.

The group of “Fogbowers” participates in the Reality Check Radio Show every Tuesday and has produced over 100 shows since 2009.  The show is normally hosted by “RC,” who believes that “the birthers are not grounded in reality.”  While discussing politics in general, the shows normally focus on discrediting those claiming that Obama is either constitutionally ineligible to hold the office of President or has achieved the office through identity fraud and possibly other crimes.

On September 16, 2010, Reality Check was hosted by a guest host who identified himself as “a White House attorney” and a member in good standing of The Fogbow, referred to as “NEON.”

The segment of the show which identifies the White House attorney, with Fitzpatrick’s remarks preceding it, follows.  The woman’s voice on the recording is that of “mimi,” another member of The Fogbow.

A clip of the man identified as a White House attorney by Fogbow member “Realist” is here:

U.S. Code prohibits a federal employee from participating as a paid employee or unpaid volunteer in any situation which would create a conflict of interest or illusion thereof:

Under section 205, an employee may not, other than in the discharge of official duties:

The latter restriction is very broad. It applies to any particular matter regardless of whether the matter is related, or even appears to be related, to an employee’s position or duties, and regardless of whether there is any real possibility that the employee may exert any real influence. Notably, this provision places limits on an employee’s volunteering and other unpaid activities.

The Fogbow forum has a member using the name “NEONZX” who has published numerous posts about Walter Francis Fitzpatrick, III and Darren Wesley Huff, the latter of whom was sentenced to four years in federal prison for a crime he did not commit and at whose trial The Post & Email has determined that at least seven public officials perjured themselves for the prosecution.

If NEONZX and NEON are the same person, then an Obama White House attorney has actively engaged in a disinformation campaign against Fitzpatrick and Huff, culminating in numerous jailings and federal incarceration for the two men, respectively. 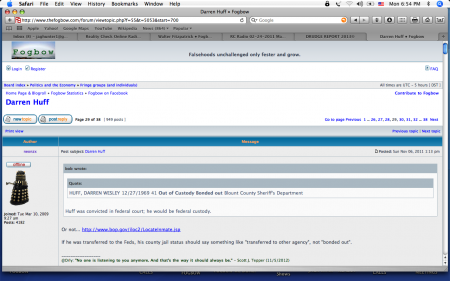 Since 2008, the Obama regime has proudly “controlled the media.”  NBC and MSNBC are sources of government propaganda rather than news, with an openly “progressive” orientation, while real journalism requires the reporter to be neutral.  MSNBC’s “Lean Forward” slogan closely resembles Obama’s 2012 campaign slogan of “Forward!” which was also used by the Hitler Youth Corps during the buildup to World War II.

Foggy and his Fogbow Gang buried local Monroe County law enforcement and government officials with phone calls and emails in brazen acts of criminal political activity, falsely warning that LCDR Fitzpatrick and his supporters were planning to descend upon the city of Madisonville with armed violence.

Taking full advantage of what law enforcement knew to be an invented police crisis and a domestic terrorist hoax, government operatives deployed a shocking paramilitary assault of extreme proportion.

Sniper and SWAT teams, FBI and TBI agents, local police and six county sheriffs’ offices were joined in what law enforcement officials knew was a political hoax. Schools, banks and government offices were closed, and Tennessee Highway Patrolmen escorted Judge J. Reed Dixon to the courthouse for the hearing.

Among mainstream news reports that threats had been called in to the courthouse of armed resistance planned for April 20, no one was found with a gun, directly contradicting a sworn affidavit of FBI Special Agent Mark A. van Balen, who reported gaining his information second-hand.

No one was confronted for carrying a gun, for brandishing a weapon, threatening violence or any other violation.  Darren Huff, who had traveled to Madisonville to attend Fitzpatrick’s hearing, returned home uneventfully but was arrested ten days later for “a crime that never happened.”

An initial hung jury led to a conviction on one count after Judge Thomas A. Varlan told the jury to “come back in the morning and continue your deliberations.”

Bryan and his ilk are otherwise described as “trolls” who proudly claim responsibility for many other acts of criminal political activism. Besides the White House attorney troll, there is another one of “Foggy’s” close confidants named Mitzi Lynn Torri, an IRS attorney/agent working out of New Orleans, LA.

Trolls who have reportedly been paid to post Obama-supportive and distracting comments register at various websites under multiple screen names and IPs, including at The Post & Email.  Three months after Obama took office, Fox News reported “a plague of internet ‘trolls’ — troublemakers who work to derail cyber-conversations through harassing and inflammatory posts.”

As reported previously by The Post & Email, some of these trolls have perpetrated payment scams which Paypal has detected as fraudulent after launching its own investigations. Death threats have been made against Fitzpatrick, this writer, Cold Case Posse Lead Investigator Michael Zullo, Pastor Carl Gallups and others, death threats which are now under scrutiny.

Walter Fitzpatrick recently spoke to a number of the Fogbow members directly:  Richard C. Rockwell (TollandRCR), William Bryan (“Foggy”), BadFiction blogger Patrick McKinnion ({PatGund”), and Mitzi Lynn Torri, the IRS agent (“GeorgetownJD”), who admitted in one of her Fogbow postings that she had received Fitzpatrick’s telephone call accepting her offer to take LCDR Fitzpatrick out to lunch.

In 1972, Washington Post reporters Bob Woodward and Carl Bernstein discovered that the Watergate Hotel was bugged by Republican operatives to discover their campaign strategy against President Richard M. Nixon, who was running for reelection.  Nixon was found to have obstructed justice and was forced to resign in 1974 in disgrace.

“We’re the ones who got more than 100 cops ready for LCDR Walt Fitzpatrick, when he showed up on April 20 with a group of armed men who thought they’d take over the Monroe County courthouse.”

The personal pronoun “we” “Foggy” Bryan uses in his boasting about the Madisonville hoax includes one of Obama’s White House attorneys.

As The Post & Email has reported previously, Fitzpatrick had no plans to “take over the Monroe County courthouse.”  There was no coordination with any of those who drove short or long distances to attend the hearing, and no one was carrying a gun in Madisonville that day, hence, the absence of arrests.  It has also been discovered that telephone calls regarding alleged threats to Madisonville and reported by then-Mayor Allan Watson came from members of The Fogbow, who were seeking to create a scenario by which Fitzpatrick would be labeled a domestic terrorist.

The allegedly terroristic phone calls were never investigated by the FBI.

Bryan, who is also known as “Foggy,” also states that he communicated with Madisonville Police Chief Gregg Breeden about Fitzpatrick:

“Foggy” stating that he “sent an email to Chief Breeden with ol’ Walt’s remarks highlighted, ‘specially where he said Breeden is a criminal and his department is corrupt. I figured that might brighten up his day considerable”

Following the April 20 event, members of The Fogbow admit interacting with Monroe County Chief Clerk Martha M. Cook and interfering with Fitzpatrick’s ability to obtain the transcript from his June 28, 2010 arraignment hearing.  However, The Fogbow, formerly called Politijab, posted the unsigned transcript on the internet within a few days of the hearing.  The copy which The Post & Email later acquired from court reporter Denise Barnes did not match the internet version and took approximately a month to arrive after payment was made.

White male veterans who support the U.S. Constitution and Bill of Rights are considered potential “domestic terrorists” and “Sovereign Citizens” by Obama’s FBI and Department of Justice as confirmed by The Rutherford Institute, a First Amendment rights organization.  Outspoken critics of the Obama regime, Christians, home-schoolers, and members of the Tea Party are also on the FBI’s radar for potential “terrorist” activity.  Fitzpatrick and Huff were identified as “Sovereign Citizens” in a training program created by the U.S. Justice Department, Tennessee Bureau of Investigation, and the FBI in materials leaked to The Post & Email.

Working behind the scenes in close cooperation with major media, the White House, DOJ, DHS IRS and Tennessee State officials, William Bryan’s Fogbow contributed to the launch of a disinformation campaign against Fitzpatrick and Huff beginning the first week of April 2010 building up to April 20, 2010.  For instance, TIME Magazine published a lengthy cover-story article on October 11, 2010 entitled “The Secret World of Extreme Militias.” Huff and Fitzpatrick are specifically named as potentially violent criminals on page 28 (page 2 of the online version) for protesting government corruption discovered in Monroe County in Eastern Tennessee.

The Southern Poverty Law Center breathed new life into the “Sovereign Citizen” campaign with the March 5, 2013 publication of its letter to the Department of Justice and Department of Homeland Security on the subject of “angry white men.”  The Department of Justice refuses to release documentation authorizing the presence of FBI agents for a “domestic terrorist” event that never occurred.

Evidence gathered by The Post & Email regarding the White House involvement in the Madisonville hoax and other criminal acts of political activism is now in the hands of law enforcement who are uniquely positioned to act.