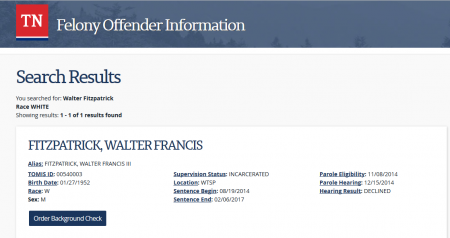 We were able to reach a female correction officer who was able to tell us only that “He’s still here.” She was unable to divulge any specific health or medical information.

Fitzpatrick was sentenced to three years in state prison in August 2014 after attempting to appear before the McMinn County grand jury to attest to widespread public corruption including judges, prosecutors, grand jury foremen, and, perhaps unwittingly, grand jurors themselves.

Throughout the state of Tennessee, judges of the county criminal courts hand-pick the foreman of the grand jury and retain him or her as long as they wish. Fitzpatrick has described the practice as “rigging the grand juries” by the creation of a “patronage position” in the person of the grand jury foreman.

Since 2009, when Fitzpatrick became aware of the long-standing tradition, albeit an illegal one, of the judge selecting the foreman “from wherever they choose,” The Post & Email has been told dozens of stories from Tennesseans who claim that they or members of their family have been wrongly accused, indicted by a county grand jury, tried in a court without constitutional due process, and convicted with insufficient evidence.

Exculpatory evidence is often withheld, and relatives of those incarcerated have reiterated a common theme: that local governments prey on the poor in order to fill their jails and prisons.

Before he was sent to state prison, Fitzpatrick had spent considerable time in the Monroe County jail after attempting a citizen’s arrest of then-grand jury foreman Gary Pettway on April 1, 2010.

Under the Obama regime, Fitzpatrick and others, particularly military veterans, have been termed potential “domestic rightwing terrorists” for speaking out against government corruption and illegal immigration or in favor of the Second Amendment, among other things.

At the beginning of March, Fitzpatrick was moved to WTSP, which last year was scheduled to undergo a conversion to a women’s prison and men’s maximum-security facility. However, it appears that the plans did not materialize.

Before he was sentenced nearly two years ago, Fitzpatrick had stated that he wished to receive no mail or phone calls while in prison. The Post & Email honored those wishes until approximately a year ago, after Fitzpatrick contacted us to report a prisoners-for-profit operation being run from inside the Northwest Correctional Complex (NWCX), where he was housed at the time.

Fitzpatrick and another inmate, Jerome L. Johnson, as well as many others, were enrolled in the Pro-Social Life Skills (PSLS) course against their wishes for which The Post & Email can confirm Fitzpatrick and Johnson received disciplinary write-ups for refusing to participate.

Johnson appealed through administrative channels to TDOC Commissioner Derrick Schofield, who ultimately upheld the write-up and conviction by NWCX personnel, with the punishment detailed as ten days in “the Hole,” a $5.00 fine, loss of privileges and loss of his job working in the prison kitchen.

Johnson additionally filed a Title VI civil rights complaint with the U.S. Department of Justice’s Civil Rights Division directed to Mr. Michael Alston, but to our knowledge, he has not received a response.

By several accounts, NWCX is plagued with violence initiated by members of street gangs who reportedly enjoy a great deal of freedom within the facility.

While at NWCX, Fitzpatrick had attempted to send The Post & Email evidence of a reported open wound, but the mailroom destroyed the package, reportedly in keeping with prison regulations.

WTSP, known colloquially as “West High,” has also experienced violence, as has the Hardeman County Correctional Facility (HCCF), which is privately-operated by Corrections Corporation of America (CCA).

An online prisoner search tool indicates that Fitzpatrick’s sentence will conclude in February of next year.  In November 2014, just three months after he was incarcerated, he was offered parole but declined it, contrary to a letter sent from the TDOC to a high school friend of Fitzpatrick’s who wrote a letter of concern about the circumstances of Fitzpatrick’s incarceration.

Fitzpatrick is a 20-year veteran of the U.S. Navy and graduate of the U.S. Naval Academy in Annapolis.  In 1989, he was falsely accused of misappropriating Morale, Welfare, and Recreation (MWR) funds to finance a trip for a handful of sailors from his ship, the USS Mars, to travel to Washington, DC. In reality, however, as the ship’s executive officer (XO), Fitzpatrick had taken a vote and received nearly unanimous consensus on the proposed appropriations to send a delegation to the nation’s capital to greet the ship’s captain, Michael Nordeen, whose brother, William Edward Nordeen, also a Navy veteran and then-serving as a U.S. ambassador to Greece, had been killed in a terrorist attack.

The ensuing court-martial truncated Fitzpatrick’s Navy career such that he was forced to retire at his 20-year anniversary. A substantial number of FOIA requests Fitzpatrick submitted after his conviction revealed that a forgery of his signature was applied to a “confession letter” which Fitzpatrick had never seen.

The Navy is aware of the forgery but will not respond to questions on the matter. The Navy Criminal Investigative Service (NCIS) abruptly ceased its own investigation in 1998 after it became evident as to who the forger was and has declined repeatedly to reopen the case.