(Feb. 2, 2018) — In the wake of the release of the four-page House Permanent Subcommittee on Intelligence (HPSCI) early Friday afternoon, House Judiciary Committee member Rep. Jim Jordan (R-OH4) tweeted that the ‘”salacious and unverified dossier” compiled by Fusion GPS and the DNC in 2016 was taken to the Foreign Intelligence Surveillance Court (FISC) more than once to obtain a warrant to collect the communications of at least one Trump campaign aide.

Just before 1:00 p.m. EST, the DNC issued a response to the memo stating that Trump’s relationship with Russia, without using the word “alleged,” should be fully investigated and the American people fully informed.

The implications of having used the “Trump dossier,” compiled by former MI6 agent Christopher Steele and paid for by the DNC and the Hillary Clinton campaign via the law firm Perkins Coie, to obtain a surveillance warrant on former Trump economic adviser Carter Page appear to be that the FISA court was not informed of the political connections with which the dossier was assembled.

The memo, which is just over three pages and declassified on Friday, reports that Steele was vehemently opposed to the idea of a Trump presidency as expressed to DOJ Deputy Attorney General Bruce Ohr.

Steele met with Ohr after Steele was terminated as an FBI source once the FBI learned that Steele had leaked information to news outlets, including Yahoo! News.

Trump has maintained that there was no “collusion” between his campaign and the Kremlin and that the investigation, now headed by former FBI director Robert S. Mueller, III, is a “witch hunt.”

In December, Flynn pleaded guilty to lying to the FBI, although Mueller on Wednesday petitioned the court to postpone Flynn’s sentencing.

Democrats on the HPSCI are said to have prepared a ten-page memo of their own on the dossier matter which has not yet been approved for release.

As this article went to press, Jordan issued a further tweet, which quotes from page 3 of the now-released memo: 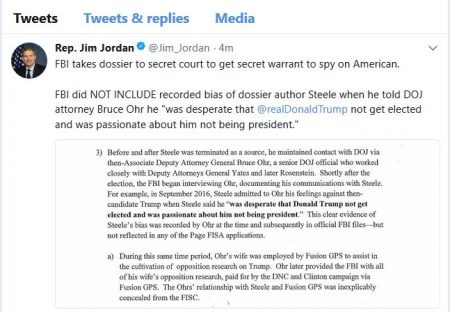