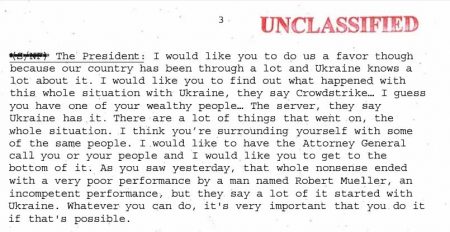 (Nov. 13, 2019) — At the first “impeachment inquiry” hearing by the House Permanent Subcommittee on Intelligence on Wednesday held to determine whether or not President Donald J. Trump should be impeached, Committee Chairman Adam Schiff (D-CA28) invoked Trump’s mention of a computer server belonging to the Democratic National Committee (DNC) said to have been “hacked” by Russian-government operatives to interfere in the 2016 U.S. presidential election.

The subject of the server and the company which reportedly examined it for intrusions, Crowdstrike, arose in a conversation between Trump and Ukrainian President Volodymyr Zelenskiy on July 25, 2019, which prompted a “whistleblower” complaint claiming that Trump was abused his power by seeking political favors from Zelenskiy.

The White House released a transcript of the call on September 24, the same day Speaker of the House Nancy Pelosi announced the official launch of the “impeachment inquiry.”

The relevant portion of the transcript reads that “Ukraine knows a lot about” the “Russia collusion” narrative, without Trump’s having used those words but referring to the 22-month investigation carried out by Special Counsel Robert S. Mueller, III which concluded that no “conspiracy” between the Trump campaign and Russia took place during the 2016 election cycle.

“They say a lot of it started with Ukraine,” Trump is noted to have told Zelenskiy.

For more than three years, the government and media narrative has been that Russian-government operatives interfered in the election to favor Trump.  In early January 2017, the U.S. intelligence community published a report claiming that “Russian efforts to influence the 2016 US presidential election represent the most recent expression of Moscow’s longstanding desire to undermine the US-led liberal democratic order, but these activities demonstrated a significant escalation in directness, level of activity, and scope of effort compared to previous operations.”

On page 12 of the 25-page report, the assessment reads, in part:

We assess Russian intelligence services collected against the US primary campaigns, think tanks, and lobbying groups they viewed as likely to shape future US policies. In July 2015, Russian intelligence gained access to Democratic National Committee (DNC) networks and maintained that access until at least June 2016.

The report written by Mueller’s prosecution team states on page 1 of the “Introduction to Volume I”:

Page 5 of the Mueller report states, in a section subtitled “RUSSIAN CONTACTS WITH THE CAMPAIGN,” that in “Spring 2016”:

Campaign foreign policy advisor George Papadopoulos made early contact with Joseph Mifsud, a London-based professor who had connections to Russia and traveled to Moscow in April 2016. Immediately upon his return to London from that trip, Mifsud told Papadopoulos that the Russian government had “dirt” on Hillary Clinton in the form of thousands of emails. One week later, in the first week of May 2016, Papadopoulos suggested to a representative of a foreign government that the Trump Campaign had received indications from the Russian government that it could assist the Campaign through the anonymous release of information damaging to candidate Clinton. Throughout that period of time and for several months thereafter, Papadopoulos worked with Mifsud and two Russian nationals to arrange a meeting between the Campaign and the Russian government. No meeting took place.

In his book, “Deep State Target,” as well as in testimony to members of Congress last year, Papadopoulos claimed that his meetings with Mifsud were prompted by others in what now appears to Papadopoulos to have been an orchestrated effort to entrap him.

The Senate Intelligence Committee, too, determined earlier this year after a lengthy investigation that “The Russian government directed extensive activity, beginning in at least 2014 and carrying into at least 2017, against U.S. election infrastructure at the state and local level” (p. 3) and “the Committee found ample evidence to suggest that the Russian government was developing and implementing capabilities to interfere in the2016 elections, including undermining confidence in U.S. democratic institutions and voting processes” (p. 5).

Prior to the emergence of the “Ukraine scandal,” as Schiff has termed it, and as a U.S. Justice Department investigation into the origins of the “Russia collusion” narrative progressed, Papadopoulos and several members of Congress have said that “exculpatory” information in the form of recordings of Papadopoulos’s conversations with Mifsud and then-Australia Ambassador to the UK Alexander Downer exist and were not presented to Papadopoulos’s defense counsel after he was charged with lying to the FBI.

Papadopoulos ultimately accepted a plea deal but has said in interviews and on Twitter that the DOJ’s probe into the “investigators” who launched the collusion investigation, which is being spearheaded by U.S. Attorney for the District of Connecticut John Durham, will demonstrate that the governments of Italy, the UK, Australia, and Ukraine participated in a conspiracy to gather intelligence on and damage the Trump campaign.

On January 11, 2017, Politico reported that Ukrainians did, in fact, attempt to assist the Clinton campaign in 2016.  The article identified Alexandra Chalupa, a DNC operative whose name was raised during Wednesday’s hearing, as having “developed a network of sources in Kiev and Washington, including investigative journalists, government officials and private intelligence operatives. While her consulting work at the DNC this past election cycle centered on mobilizing ethnic communities — including Ukrainian-Americans — she said that, when Trump’s unlikely presidential campaign began surging in late 2015, she began focusing more on the research, and expanded it to include Trump’s ties to Russia, as well.”

Although the Mueller report associates Mifsud with Russia and contends that he lied to investigators (p. 201), Mueller’s team did not seek to prosecute him as it did former Trump associate Roger Stone, former Trump campaign manager Paul Manafort, and former Manafort aide Rick Gates, among others.

Several members of Congress, including House Intelligence Committee ranking member Devin Nunes, claim that Mifsud is a Western intelligence asset and that if he had been associated with Russia, his travel to the U.S. in early 2017, acknowledged in the Mueller report (p. 201), would have been a national security threat.

For more than two years, Mifsud has reportedly been in hiding, allegedly under the protection of the Italian government.  On October 26, investigative journalist Sara A. Carter reported that Durham and Attorney General William Barr traveled to Rome to meet with Italian officials.  While there, Carter said, Durham and Barr “were able to hear a recording in Italy in a very closed room, nobody allowed in there, where Joseph Mifsud apparently explains why he believes his life is in danger and why he needs constant security. There is also information that he was working for Western intelligence…”

She then reported that former CIA Director John Brennan and former Director of National Intelligence James Clapper are “wrapped up” in the DOJ’s investigation into the “Russia” narrative’s origins.

On Sunday, Papadopoulos tweeted, “Alexander Downer, the Clinton errand boy whose bizarre behavior at my meeting with him sparked the Durham probe, was on Australian tv today ranting like a lunatic against Trump and me. The probe is closing in on him. He’s feeling the heat.“

On September 30, Rolling Stone published an article titled, “that “Trump Knew the Ukrainian Conspiracy Theory Had Been Debunked — But Pushed It Anyway” based on a statement made by former Trump Homeland Security Adviser Tom Bossert and containing a link to an article from five days earlier titled, “What You Need to Know About Trump’s Crowdstrike Conspiracy Theory.”

The Daily Beast headlined an article on October 16 titled, “The Truth About Trump’s Insane Ukraine ‘Server’ Conspiracy” which contended:

President Donald Trump on Wednesday once again promoted the baseless idea that a Democratic National Commitee server that was hacked in 2016 is being held in Ukraine. Below is a story The Daily Beast published last month about this conspiracy theory amid revelations that Trump asked the president of Ukraine to investigate it.

Donald Trump asked for more than a criminal investigation of his political opponent’s son in his call with Ukraine’s president. Trump also sought help in reviving a long-ago debunked conspiracy theory that challenges the basic underpinnings of the U.S. intelligence community’s findings on Russia’s 2016 election interference, in a bizarre spectacle that sees an American president trying to conscript a foreign leader into undermining his own intelligence agencies.

On October 22, Mediaite wrote that “Trump Continues to Promote False and Debunked Ukraine DNC Server Conspiracy Theory.”  The same day, Yahoo! News reported that “The ‘server’ Trump keeps looking for will never be found, because it doesn’t exist.”  The article begins, “It’s the conspiracy theory that could bring down a presidency: the idea that an old Democratic National Committee email server is hidden somewhere in Ukraine and could rewrite the history of the 2016 election.  If it does lead to President Trump’s impeachment, it will be because he believed it.”

“There is no DNC server,” the article concluded.

On September 25, ABC News reported that “Trump’s Crowdstrike mention on Ukraine call likely referred to debunked DNC server theory.”  “Trump was apparently asking the Ukrainian president to open an investigation into what has repeatedly been described as a debunked conspiracy theory Trump has often promoted to defend himself against his Democratic critics,” ABC’s Mike Levine wrote.

No media outlet has offered evidence as to how it arrived at the conclusion that the server is definitely not located in Ukraine and that Trump’s apparent belief in the possibility is a “conspiracy.”

Several sources, including Stone, have suggested that the DNC’s servers were not “hacked” by Russians, but rather, that the stealing of thousands of emails transferred to WikiLeaks in 2016 was “an inside job.”

In the recent past, the mainstream media has referred to the suggestion that Barack Hussein Obama was born outside of the United States or that his “long-form” birth certificate posted on the White House website in 2011 is a forgery with those same words:  “debunked” and “conspiracy.” 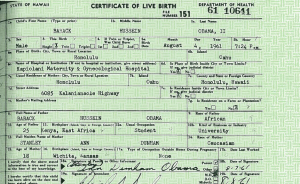 As with the DNC server, such reports have not stated by what method the “conspiracy” was “debunked” or by whom, as neither the FBI nor Congress investigated the evidence gleaned from a 5+year investigation conducted by a former private investigator and detective under the authority of then-Sheriff Joseph Arpaio’s office.

In contrast with media reports on the subject, lead investigator Mike Zullo revealed on a radio show last year that two seasoned U.S. intelligence agents informed him that it is “an open secret” that Obama was born outside of the United States, raising serious questions about his constitutional eligibility to have served as president and commander-in-chief.

That concern was what drove the very “birther” conspiracy which the media has ridiculed, marginalized, and reviled while conducting no investigation of its own to arrive at the truth.

Zullo has implicated the “Deep State,” a term now commonly used in some circles to refer to entrenched, unelected government bureaucrats who seek to control U.S. policy in a variety of areas, in regard to the forgery and the attempted unseating of President Trump.

“I really believe that all roads are going to lead back to John Brennan,” Zullo said of the birth-certificate forgery.

Do Democrats Fear Trump’s Claim about the DNC Server is True? added on Wednesday, November 13, 2019

5 Responses to "Do Democrats Fear Trump’s Claim about the DNC Server is True?"