AND HE IS NOT ALONE 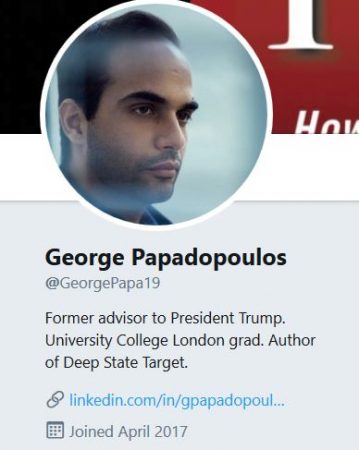 (Nov. 3, 2019) — On Saturday evening, former Trump campaign adviser George Papadopoulos tweeted, in regard to the Justice Department’s investigation into the origins of the Trump-Russia “collusion” narrative, that “all roads lead to Brennan and McCabe.”

In testimony to members of Congress last October as well as numerous public statements over the course of a year or more, Papadopoulos has claimed he was targeted by overseas intelligence services, including the FBI, in 2016 after it became public that he joined the Trump campaign as an informal, volunteer foreign-policy advisor.

In 2017, Papadopoulos accepted a plea agreement with the Justice Department for lying to the FBI, but he later claimed that the FBI had not presented Justice with exculpatory information.  His claim appears to reference recordings members of Congress have said exist between Papadopoulos and Maltese Professor Joseph Mifsud when Mifsud told Papadopoulos that unnamed “Russians” had “dirt” on Hillary Clinton in April 2016.

Papadopoulos believes that the meeting, which he did not request, was part of a setup as he described in his book, “Deep State Target:  How I Got Caught in the Crosshairs of the Plot to Bring Down President Trump.“

Papadopoulos became embroiled in the narrative which consumed Washington, DC for more than two years and claimed that someone from the Trump campaign, and possibly Trump himself, “colluded” with Russians to gain an election advantage. The narrative was proven false after a 22-month, $30 million investigation conducted by Special Counsel Robert Mueller which concluded that no American conspired with the Kremlin to alter the outcome of the 2016 election.

As with former Trump campaign adviser Rick Gates and several other Americans, Papadopoulos was charged with a “process crime” stemming from the FBI’s counterintelligence probe into the Trump campaign.

In May, the Trump administration announced that Attorney General William Barr had tasked U.S. Attorney for the District of Connecticut to investigate the “investigators” who launched the FBI’s investigation.  In August, investigative journalist John Solomon reported that Barr and Durham were then focused on what occurred in the early part of 2016, before the official date of July 31 which the FBI said it opened the probe.

In recent days, however, investigative journalist Sara A. Carter and others have reported that former CIA Director John Brennan and former Director of National Intelligence James Clapper are among a small group on which the Durham probe is now centered.  On October 25, Carter reported, speaking of Mifsud, “There is also information that he was working for Western intelligence, and this is what wraps up John Brennan as well as others like James Clapper into this mess, and that is why they have been really running scared for months now, because they know — the heat is not on ‘impeachment’; the heat is actually on them.”

On Friday, The Washington Examiner reported that recent public remarks made by former FBI Deputy Director Andrew McCabe and Brennan indicate they are willing to “cooperate” with the Durham probe.

In late August, multiple reports said that McCabe’s legal team was engaged in negotiations with the Justice Department regarding the possibility of an indictment against their client, who was recommended for criminal investigation by DOJ Inspector General Michael Horowitz in March 2018.  McCabe maintains his innocence against Horowitz’s claim that McCabe was dishonest with investigators into whether or not he leaked sensitive information to the media.

In tweets over the last year, Papadopoulos has indicated that the intelligence services of Italy, the UK, and Australia were collecting information on the Trump campaign in conjunction with the CIA and FBI.  Papadopoulos also contends that Ukraine was involved in the effort to derail the former businessman’s presidential candidacy.

On Thursday and Friday, respectively, Papadopoulos tweeted that “Ukraine, U.K., Australia and Italy” were “the four countries who did the most to interfere in our democratic process in 2016.  Brennan was the ring leader that got the operatives from those countries lined up.  Italy flipped first and are aligning themselves right.” [sic] 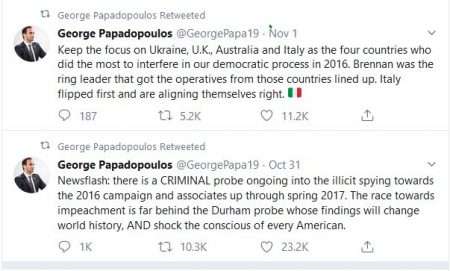 In May 2018, Obama birth-certificate investigator Mike Zullo said on Carl Gallups’s “Freedom Friday,” “I personally believe, aside from Obama, all roads lead back to John Brennan with this birth certificate.”  In March 2012, Zullo, a former detective and private investigator, announced at a press conference that the then-six-month probe, authorized by the Maricopa County Sheriff’s Office, found the birth-certificate image to be a “computer-generated forgery.”

The media has suppressed the results of Zullo’s 5+-year investigation, whose conclusions were supported by two forensics experts from two different continents and approaching the birth-certificate image from different disciplines.  Despite multiple credible media reports that Obama was born in Kenya or Indonesia, throwing his constitutional eligibility into doubt, after Obama became the Democratic presidential nominee in 2008, the media labeled anyone questioning his birthplace or qualifications a “birther.”

In 2016, The New York Times said Donald Trump, who brought the issue into public view, “could not stop talking about it.”  “Raising questions about the president’s birth certificate — and even threatening to send a team of investigators to Hawaii — had served its purpose, raising Mr. Trump’s political profile and, whether he knew it or not at the time, providing him with the rudimentary foundation upon which he built his 2016 campaign,” The Times concluded.

In May of this year, Carter pointed to Brennan as having “deep involvement in attempting to derail the Trump campaign and, having failed that, his presidency,” as paraphrased by this publication.  That same month, Maria Bartiromo of “Sunday Morning Futures” said to guest Rep. John Ratcliffe, “I’m being told that the director of the CIA is responsible for all counterintelligence operations. That would be John Brennan. Are we going to see accountability for all of the above?”

The same month, speaking of the “collusion” narrative, Zullo told Gallups, “The CIA operates overseas. John Brennan was director of the CIA at that time.  If you’re going to set up an operation, you have to develop information abroad and bring it back to authorities in the United States, i.e., the FBI, to get any type of investigation conducted…If you were going to do something to set up the President of the United States, and you were the head of an agency that could not work internally, cannot work within the borders of the United States…you develop information outside the borders; now it’s your legal obligation to bring the information inside the borders, and that opens the door for the FBI and the NSA to start playing their games.”

Although claiming to be a “nonpartisan American,” Brennan has shown a particular animus toward Trump and his administration since leaving his post in January 2017.  He has accused Trump of “treasonous” behavior and said that “Betrayal of friends, partners, & allies has always been one of @realDonaldTrump’s most intrinsic qualities.”

Papadopoulos: “All Roads Lead to Brennan and McCabe” added on Sunday, November 3, 2019

9 Responses to "Papadopoulos: “All Roads Lead to Brennan and McCabe”"