HOW LONG HAS THE U.S. INTELLIGENCE COMMUNITY BEEN SPYING ON AMERICANS?

(May 6, 2019) — In discussing on Monday night’s “Hannity” the origins of the Trump-Russia “collusion” investigation launched by the FBI and continued by Special Counsel Robert Mueller, guest and investigative journalist Sara A. Carter said that government surveillance of Americans — in addition to members of the 2016 Trump campaign — began “years before” the counterintelligence probe into the unlikely campaign of non-politician and billionaire businessman Donald Trump.

Carter began by stating that an investigation already under way by U.S. Attorney John Huber and that which Attorney General William Barr is reportedly about to initiate will likely reveal details of abuse of the FISA law governing surveillance, including against former Trump foreign-policy adviser George Papadopoulos.

Since the March 22 delivery of the report to Barr by Special Counsel Robert Mueller, who assumed the FBI’s Trump-Russia probe after FBI Director James Comey was fired in May 2017, Hannity has questioned when Mueller might have become aware that there was no “collusion” between anyone in the campaign and Russia, as the FBI had alleged.

The report found no evidence of a collaboration or “conspiracy,” Mueller’s team said, and came to no conclusion as to an allegation of “obstruction of justice” on Trump’s part.  Some, including Barr, have argued that no “obstruction” could have taken place in the absence of the underlying initial alleged crime.

As Hannity and Carter discussed, along with Fox News Legal Analyst Gregg Jarrett during the segment, Barr has been excoriated in the media for ruling out any prosecution for obstruction.

In a letter written to Barr by Special Counsel to the President Emmet T. Flood April 19, 2019, the day after the Mueller report was made public with certain redactions, Flood wrote that the report “suffers from an extraordinary legal defect:  It quite deliberately fails to comply with the requirements of governing law.”  Flood faulted the report for reaching conclusions based on “political,” rather than legal, considerations.

Consistent with reports from Obama birth-certificate lead investigator Mike Zullo, although not mentioned by name or issue Monday night, Carter said her sources have indicated that spying on Americans was ongoing long before the 2016 campaign cycle began. 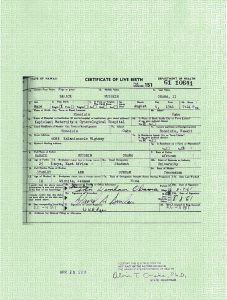 Although no mainstream outlets will report it, Zullo conducted a 5+-year probe under the authority of former Maricopa County Sheriff Joseph Arpaio, concluding that the “long-form” birth certificate image posted on the Obama White House website is a “computer-generated forgery.”

In what came to be a related matter, Zullo has cited data provided by former NSA and CIA contractor Dennis Montgomery reportedly showing massive and warrantless surveillance of possibly millions of Americans for a period of years.  In 2015, with Zullo’s assistance and that of Atty. Larry Klayman, Montgomery provided the information to a federal judge and the FBI.

According to Zullo, then-FBI General Counsel James Baker and Comey “deep-sixxed” the evidence.

In testimony to members of Congress last fall during their independent probe into how the FBI came to investigate the Trump campaign, Baker acknowledged receiving Montgomery’s information and claimed that an investigation took place.  He was unable to say, however, what the status of said investigation was at the time he left the Bureau in May of last year.

The evidence gathered on the long-form birth certificate was also provided to the FBI, Zullo said in an interview last month.

According to interviews Zullo has given over more than a year as well as Klayman’s statements dating back several years, Trump was spied on by the intelligence community from the early years of the George W. Bush administration through at least 2010, when Montgomery’s evidence timeline ends.  Klayman has said that 156 federal judges were surveilled, including the judge overseeing a 2015 civil trial against Arpaio, and that his own banking information was collected.

Arpaio’s deputy, Gerard Sheridan, testified at the time that he believed the CIA was surveilling MCSO personnel’s office and personal phones.

Carter specifically identified Obama-era CIA Director John Brennan and Director of National Intelligence (DNI) James Clapper as likely having deep involvement in attempting to derail the Trump campaign and, having failed that, his presidency.

Hannity predicted a day of reckoning for the mainstream media once all of the facts about government surveillance, infiltrators into the Trump campaign, and other abuses are made public, presumably as a result of work completed by Huber, Barr and certain members of Congress who Hannity said want definitive answers as to why the FBI launched its probe in the first place.

For more than two years, the media fueled the narrative that someone within the Trump campaign coordinated with the Kremlin to tip the election in Trump’s favor over Democrat Hillary Clinton, who over the weekend claimed the election was “stolen” from her.

In regard to the birth-certificate forgery, Zullo has said he believes that “all roads lead to John Brennan.”