WERE THEY ALSO GIVEN EVIDENCE OF OBAMA BIRTH CERTIFICATE FORGERY? 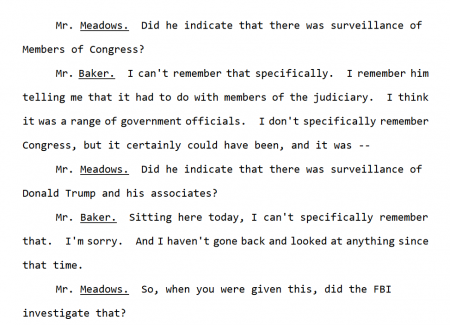 (Apr. 25, 2019) — On page 100 of the transcript from former FBI General Counsel James Baker’s second closed-door testimony to members of Congress last fall, Rep. Mark Meadows (R-NC11) returned to a topic Baker raised in the opening minutes: that of allegations of widespread, warrantless surveillance of American citizens, including federal judges, provided to Baker by Attorney Larry Klayman on behalf of a client.

Klayman at the time represented former NSA/CIA contractor Dennis Montgomery, who claimed he had in his possession approximately 600 million records demonstrating that government intelligence agencies had illegally collected, over a period of years, the communications and personal data of prominent businessmen, including Donald J. Trump, his family and some of his employees; more than 150 federal judges, including U.S. Supreme Court Chief Justice John Roberts and Associate Justice Ruth Bader Ginsburg; U.S. District Court Judge G. Murray Snow, who oversaw a civil case against then-Maricopa County, AZ Sheriff Joseph Arpaio in 2015; Arpaio himself; and media figures such as Alex Jones of Infowars, among others.

As The Post & Email reported on April 16, at the outset of his October 18, 2018 closed-door interview to members of the House Oversight & Government Reform and Judiciary Committees, Baker spontaneously revealed, as a result of questions he received on October 3, 2018 concerning the process by which the FBI and DOJ obtain FISA surveillance warrants, that Klayman wished to speak with none other than then-FBI Director James Comey or him about the information Klayman’s client said he had.

In response, Baker testified, he dispatched FBI agents to where the data could be retrieved.

In an interview with Carl Gallups of “Freedom Friday” last week, Obama birth certificate lead investigator Mike Zullo said that along with the millions of records Montgomery turned over to the FBI was the evidence Zullo and Arpaio collected over more than five years demonstrating that the image posted on the White House website on April 27, 2011 said to represent Barack Hussein Obama’s “long-form” birth certificate is a forgery.

A former detective, Zullo oversaw Montgomery’s year-long work as a confidential informant for Arpaio’s office in 2014 and has verified that the data Montgomery has cited exists.  In November 2015, Zullo reported having seen his own name among those allegedly illegally surveilled by the U.S. government.

Meadows, a member of the House Judiciary Committee, pressed Baker as to the format of the documentation Montgomery provided which Baker clarified as “electronic media.”  “I don’t think they were printed documents,” he said.

“Were there six thumb drives? Does that ring a bell?” Meadows asked, after which the following exchange took place (bottom of page 100): 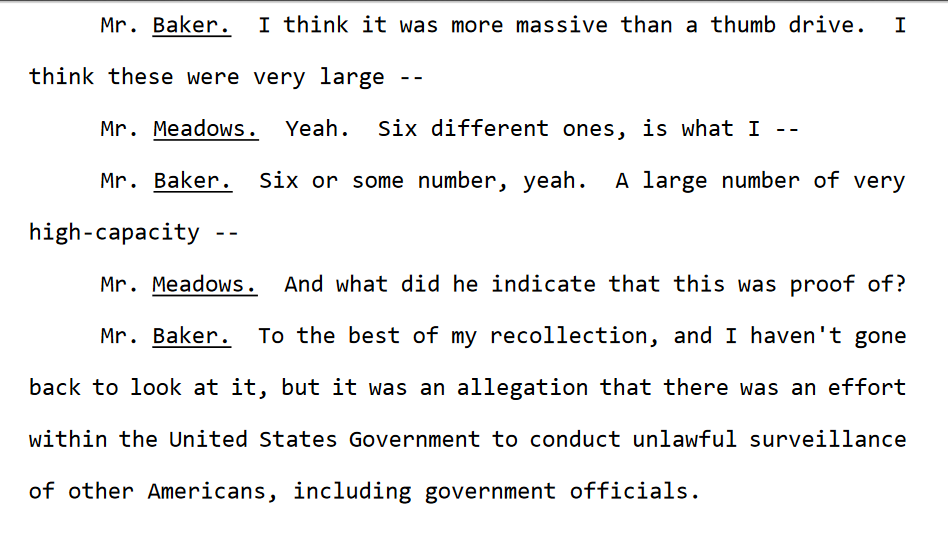 Page 101 begins with Meadows asking, “Did he indicate that there was surveillance of members of Congress?”

“I can’t remember that specifically. I remember him telling me that it had to do with members of the judiciary. I think it was a range of government officials. I don’t specifically remember Congress, but it certainly could have been, and it was –” Baker is noted to have responded.

Meadows further pressed, “Did he indicate that there was surveillance of Donald Trump and his associates?”

Baker, who left government service in May of last year following a demotion, replied that he did not specifically remember.  To Meadows’s question as to whether or not the FBI launched an investigation into Klayman and Montgomery’s claims, Baker responded, “To the best of my recollection, yes.”

He then said that his understanding when he left the agency was that “there were no further investigative activities occurring” related to the case, “but I don’t know that it was technically closed.”

According to Zullo, Baker and Comey “deep-sixxed” the information Montgomery turned over to them, which had followed Montgomery’s having testified twice to the FBI in 2015 for which he was granted testimonial and production immunity, respectively, by the Justice Department.

Zullo has stressed in interviews over the last year that concerning the birth certificate forgery, “all roads lead to [former CIA Director] John Brennan.”  He has reported, citing two U.S. intelligence agents, that it is “an open secret” that Barack Obama was not born in the United States.

Beginning in 2007, questions arose about Obama’s eligibility for the office of president given a number of mainstream news articles which had reported him as having been born in Indonesia or Kenya and not Hawaii, as he claims.  Some, including a biography issued by his then-literary agent in 1991, were subsequently changed to say that Obama was “born in Hawaii.”

On Wednesday, The Wall Street Journal reported that “The National Security Agency has recommended that the White House abandon a surveillance program that collects information about U.S. phone calls and text messages, saying the logistical and legal burdens of keeping it outweigh its intelligence benefits, according to people familiar with the matter.”