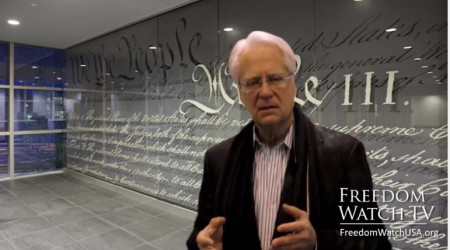 (Jan. 4, 2017) — In a video released on Tuesday through his FreedomWatch organization, former federal prosecutor and attorney Larry Klayman reported that under the supervision of CIA Director John Brennan, the intelligence agency designed to gather information only overseas, “hacked” into the personal information of “156 judges” as well as other prominent people including Klayman himself.

Klayman called the CIA’s recent claims that the Russian government “hacked” the November 8 election and the DNC “very, very hypocritical.”

Thousands of emails were released by WikiLeaks last summer, but WikiLeaks founder Julian Assange has said that his source was not the Russian government or any other state entity.

Klayman also incriminated Director of National Intelligence James Clapper and the NSA in illegally gathering personal information on unsuspecting Americans not suspected of a crime.

“These agencies have committed far greater crimes than the Russian government is alleged to have done,” Klayman said.

Klayman revealed that he arranged for the former confidential informant, Dennis Montgomery, who he also represents in a civil suit, to testify to the FBI.  Montgomery was granted two immunity agreements in connection with his testimony.

In November 2013, Montgomery had told Arpaio that 150,000 bank accounts of Maricopa County residents had been breached by a government entity.

“To focus solely on the Russians…is very suspect, given that John Brennan of the CIA is leading the charge to try to discredit and delegitimize the presidency of Donald Trump,” Klayman said at 4:05.

Thus far, the CIA has shown no documentary evidence that the Russian government or anyone else interfered with the U.S. elections on November 8.

“These intelligence agencies are more powerful than even the president of the United States,” Klayman continued.  “They hold this information that they’ve obtained illegally.”