“CRIMINALITY ON A GRAND SCALE” 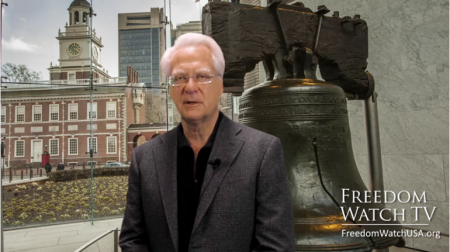 (Dec. 18, 2016) — In a video produced on Friday, December 16, former federal prosecutor and founder of Freedom Watch and Judicial Watch Larry Klayman reported that information supplied by a former NSA/CIA contractor regarding the collection of data on certain “prominent” American citizens without a search warrant is currently under FBI investigation.

“This government has been spying on hundreds of millions of Americans for decades,” Klayman stated (2:53).  “It started under the administration of George W. Bush in a major way…and it continued but got much worse under the Obama administration…”

He compared the data-collection to George Orwell’s novel “1984,” then stated that it has been the CIA’s “effort to spy on all Americans” (4:16).  Earlier in the broadcast, Klayman called CIA Director John Brennan “a political hack.”

Klayman explained that he met the former contractor, Dennis Montgomery, while litigating Klayman’s own lawsuit against the collection of data exposed by former NSA contractor Edward Snowden in June 2013.  Six months later, U.S. District Court Judge Richard C. Leon ruled that the data collection was “likely unconstitutional,” serving as an impetus to Congress to replace the U.S. Patriot Act with the USA Freedom Act in June 2015 which made more restrictive the government’s access to cellular telephone records.

Further, Klayman stated that approximately 18 months ago, Montgomery did provide testimony to “FBI special agents” (6:33) and “pinned criminality on Brennan…and (Director of National Intelligence) James Clapper and others for surveilling Americans, prominent people, harvesting them…even yours truly was harvested.”

Klayman named U.S. Supreme Court Chief Justice John G. Roberts and U.S. Supreme Court Associate Justice Ruth Bader Ginsburg as two of the victims of data-harvesting and said that the law-enforcement agency is now investigating Montgomery’s claims.  “These agents are looking at it and it’s being taken seriously,” Klayman contended.

Recently the FBI and CIA have been at odds over whether or not evidence exists that “Russia” tampered with the November 8 elections.

In civil-contempt hearings involving Maricopa County, AZ Sheriff Joseph M. Arpaio beginning in April 2015, Arpaio testified that he had hired Montgomery approximately one year before as a confidential informant to organize evidence he said he possessed that approximately 150,000 Maricopa County residents’ personal bank account information was breached by a government entity.

One of the “victims” of the alleged government data-collection was the jurist presiding over Arpaio’s case, U.S. District Court Judge G. Murray Snow, while others allegedly include Donald Trump, Maricopa County Cold Case Posse lead investigator Mike Zullo, and a number of other federal judges.  In Friday’s video, Klayman invoked “businessmen” and “Trump” as part of that class.

In May, Snow found Arpaio to be in civil contempt of court and referred the case to the U.S. Department of Justice, which declared just before early voting began in Arizona that it would pursue a criminal contempt against the 84-year-old, six-term sheriff.

On November 8, Arpaio was defeated in his bid for a seventh term.

On Thursday evening, Arpaio and Zullo presented evidence gathered over the last five years and three months by the Maricopa County Cold Case Posse demonstrating that the long-form birth certificate image posted on the White House website in April 2011 bearing Obama’s name is a forgery. At the conclusion of the press conference, Arpaio stated that the evidence will be turned over to federal authorities prior to the end of the month.  Arpaio leaves office on January 1 after his successor is sworn in.

Last fall, when Zullo testified in Arpaio’s civil-contempt matter, he revealed that Montgomery had performed a forensic analysis of the birth certificate image. Video footage presented during the hearing has not been made available to the public.

In a radio interview in early November, Zullo said that Snow had “blown up” Montgomery’s investigative work by demanding Montgomery’s work product.

In the video, Klayman said that Montgomery has exposed “criminality on a grand scale at the CIA” (7:42) and that Montgomery reportedly approached Congress with the evidence before contacting Klayman at Freedom Watch.

Klayman suggested that the data allegedly collected by the CIA could have been used for “coercive purposes” and “blackmail.”

In a video released last month, Klayman said that he believes Clapper’s resignation was encouraged by Montgomery’s revelations.

“These intelligence agencies have the ability to coerce the rest of the populace, to enslave them, into servitude,” Klayman said.  “If King George III had this capability back in 1776, the Founding Fathers never would have made their way to Philadelphia…that’s how dangerous this is.”

Klayman then answered his own question, “And who’s behind this?” with “Barack Obama, John Brennan, James Clapper…and they’ve created – really – a ‘1984’ Orwellian state.”

He then said that a “thorough investigation of the CIA, the NSA and the intelligence agencies because they’re being used for improper purposes.” (9:27)