Will McCabe Be Indicted?

“IN THE NEXT FEW WEEKS” 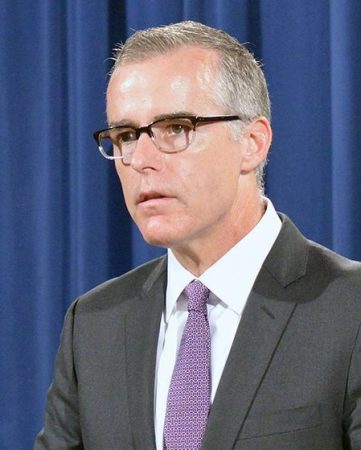 (Aug. 26, 2019) — “Hannity” host Sean Hannity reported Monday night that Justice Department prosecutors are in the final stages of deciding whether or not to prosecute former FBI Deputy Director Andrew McCabe.

The New York Times first reported the development on Monday.

McCabe served as FBI Acting Director for a time after his supervisor, then-FBI Director James Comey, was fired on May 9, 2017, and was interviewed for the director’s job prior to his own termination in March 2018.

Hired last week by CNN as a contributor, McCabe was reported by the DOJ’s inspector general, Michael Horowitz, to have “lacked candor” during interviews concerning the FBI’s conduct in 2016.  McCabe was “fired for cause” just before he was about to presumably begin receiving a federal pension and benefits package.

Horowitz is soon expected to release another report on possible “FISA abuse” stemming from the surveillance of former Trump campaign adviser Carter Page.

“As we speak, federal prosecutors are reportedly nearing a final decision on whether or not the former deputy FBI director, Andrew McCabe will be indicted for his egregious lying,” Hannity declared.  “…Do we have equal justice under the law?”

Hannity then brought on national-security reporter Catherine Herridge, who quoted The Times‘s reportage stating that McCabe’s “legal team met last week” with the U.S. attorney for the District of Columbia and deputy attorney general.  “These meetings are often used by the defense to argue against their client’s indictment,” Herridge said.

Following his termination, McCabe was referred to the U.S. attorney for the District of Columbia for possible criminal prosecution, after which he reportedly became the subject of a grand jury inquiry.

Hannity coupled McCabe’s possible legal jeopardy with that of Comey, to which Herridge responded, “It’s all hopefully going to come up in the next few weeks.”

Earlier this month, McCabe filed a lawsuit against the Justice Department alleging “wrongful termination.”  On a book tour in February, McCabe claimed that he believed it “possible” that Donald Trump is a “Russian agent,” a claim not supported by the report issued by Special Counsel Robert Mueller’s office the following month.

4 Responses to "Will McCabe Be Indicted?"