“YOU HAVE TO PUT IT OUT THERE SLOWLY” 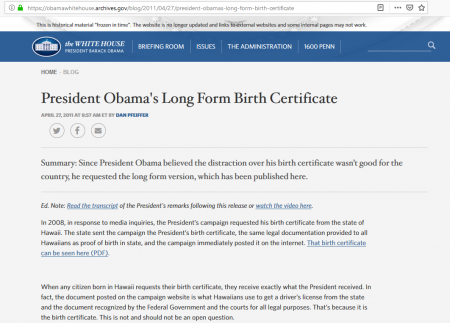 In the first segment of the show, Zullo stated for the first time that highly-placed White House officials recently received “a cursory briefing” on the evidence collected during the course of his investigation, which found that the purported “long-form” birth certificate image bearing the name “Barack Hussein Obama II” posted at whitehouse.gov on April 27, 2011 is a “computer-generated forgery.”

Obama has long claimed a birth in Hawaii despite multiple mainstream reports having stated he was born in Kenya or Indonesia and other conflicting details about his life.

The second segment of the show focused on Michelle Obama’s new book, “Becoming,” in which she said she is unable to “forgive” Donald Trump for publicly demanding that her husband release his “long-form,” or more detailed, birth certificate to prove his purported eligibility for the presidency.  Zullo noted to the audience that Michelle Obama herself described Kenya as her husband’s “home country” during a campaign speech.

Shifting topics to a degree, some callers expressed frustration that “the Clintons” may never face “justice,” to which Zullo replied that current House Republican committee chairs can “launch their own probes” even during the “lame duck” Congress.   “If an investigation is done, and it is done on the up-and-up, it will take on a life of its own, and people will be indicted,” he said.

Another caller asked Zullo whether or not he believes the 20 pages from an FBI/DOJ surveillance warrant application on former Trump campaign advisor Carter Page will ever be declassified. In September, President Trump had said he wanted the documents released publicly, along with text messages exchanged by key members of the FBI after the agency launched an investigation into his campaign. However, within a matter of days, Trump reversed course and said he had asked the Justice Department’s Inspector General to review the documents first.

Zullo responded that his understanding of Trump’s about-face was prompted by Deputy Attorney General Rod Rosenstein, who reportedly advised Trump that releasing the documents prior to the conclusion of the Mueller Russia “collusion” investigation could give the appearance of “obstruction of justice.”

Zullo also referenced a courtroom win this week for government-watchdog organization Judicial Watch wherein Hillary Clinton was ordered to answer two additional questions in writing under oath about her use of a private email server while she was Obama’s secretary of state.

However, he noted that “You don’t know what’s going to transpire with the Democrats going hog-wild on investigations,” referring to the newly-elected Democrat House which has pledged to issue between 68 and 85 subpoenas to the Trump administration once members are seated in January.

Another caller speculated that people acquainted with the Clintons and their purported wrongdoing over the years are afraid to come forward given a number of mysterious deaths of former Clinton associates.

“You gotta keep telling the lie,” Zullo responded, a theme he invoked at the outset of the program focusing on Adolf Hitler’s propaganda minister, Joseph Goebbels.

At the beginning of the fourth and last portion of the show, producer Mike Shoesmith mentioned a New York Times article reporting on Obama’s trip to Kenya this past summer during which Obama said he is the first U.S. president “from Kenya.”  Within the article, Shoesmith said, is a hyperlink to the “birth certificate” on the now-archived Obama White House website page and the statement that Kenyans consider Obama “their own.”

Shoesmith then suggested that Obama be brought to account for fraud or that authorities “send him back to the people who want him so badly.”

“It’s another reinforcement of the lie.  Keep showing the PDF file, and the gullible public will think that’s his birth certificate and everything’s good,” Zullo responded.

In his closing remarks, Zullo opined, “This issue is not going away.  I would take that as a sign of encouragement…I have this sneaking suspicion that things are going to start to be exposed and things are going to be declassified, and you can’t do a document dump on the American people; you have to put it out there slowly.”