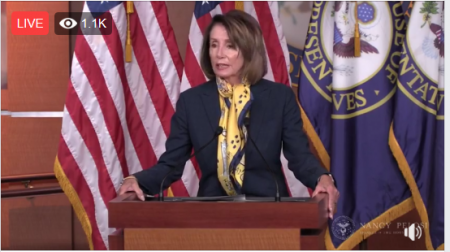 (Mar. 9, 2019) — “Good evening, ladies and gentlemen, and welcome to ‘The Pulse of the Nation,’ the place for you to become enlightened by the facts; the place where we don’t believe a word out of the Pentagon; and the one place where our audience is treated with the respect that you deserve. Did I read that right? Oh, good. Look, every once in a while we have to go through this disclaimer process — you know the routine, where we say that it’s not our fault that your cable company has never heard of us. Alright, if you can’t see us, at least you can read the transcript that’s to be found on the Internet in The Post & Email News. Today we’re broadcasting from the railroad depot, where we’re not only dry but also out of that piercing cold wind. Excuse me, Sir, Roving for ‘Pulse,’ the ever-pleasing info news show where our neighbors are waylaid on their way to the big city.”

“Then how about me saying that I’m truly sorry for my transgressions, for being uncaring and unfeeling, sorry for being selfish and sorry for missing those who I’ve loved?”

“I guess that’ll be acceptable, since it applies to Yours Truly as well as just about every immature guy out there, which is quite a few. So, what’s your name and what are you up to today?”

“Name’s Chuck and I’m off to visit the Museum of Natural History to view the mummies from Egypt and Peru.”

“That’s nice; so here’s the question of the day: Pelosi sure dropped the ball on this anti-Semitism bill, don’t you think? But before you answer, let’s take a short commercial break.”

“I think that people are either dumb or afraid; maybe dumb and afraid, but as long as Islam is treated as a religion and not some Draconian form of social control – government — then we’ll see this Creeping Sharia manifest itself continuously until one day it becomes a reality.”

“And when would that be?”

“It’ll be when the Constitution is nudged into the recesses of human memory as a great idea that just never quite worked out. It’s the Howard Stern philosophy all over again, understand?”

“Well, Howard Stern took great lengths in pushing the envelope of the First Amendment by saying cuss and swear words, not that those words or his subject matter were beneficial in any way; do you understand? Look, when a comedian doesn’t have any talent, then every other word is a cuss word, right?”

“That’s right; I think you’re on to something. Red Skelton never used those words and was very funny. It’s like Hip Hop: the more cuss words, the more popular; is that right?”

“Due to lack of communication skills, but that’s not my answer. My answer is Pelosi and all of Congress caved by denouncing the word ‘hate,’ which is just as meaningless as denouncing the sentence, ‘My steak is over-cooked; send it back.’ I mean, how meaningless and childish could they possibly be? What are they afraid of, the truth? Excuse me, but that’s my train to take me to the express bus that goes from the station to the museum. Bye, Roving.”

“And goodbye to you, Chuck. Let’s take another commercial break and then interview one more before we call it a day.”

“Hello, Mr. Roving, I’m an avid watcher; I like the Professor and that fortune-teller down in Florida.”

“So here’s the question: it has been hypothesized that investigating this Russian collusion hoax has been hamstrung and curtailed because of the possibility of leading to the Oval Office when Obama was the de facto president, meaning that the Russian collusion includes the Uranium One deal between Obama, the Clinton Foundation and Putin, and more yet-to-be-exposed deals, including the sanctioned execution of Muammar Gaddafi. Do you agree with that synopsis and, if not, why not?”

“Oh, I agree 110%, but I would’ve added Lt. Col. Terry Lakin* into the mix. Look, Roving, here’s the deal: the Deep State is another term for Grand Theft, and if you suffer from Trump Derangement Syndrome, then you must advocate the murder of your political enemies, enemies such as Ron Brown, Seth Rich and all the others. Actually, we all owe Edward Snowden a great big THANK YOU because, frankly , if it wasn’t for him then Obama’s spying on Trump never would’ve seen the light of day.”

“Well, let’s be real: most of us will never know about it since it exposes Obama’s corruption, right?”

“Yes, and here’s my train. Let me say one more thing: our republic is being attacked nine ways to Sunday, and one of the ways is allowing fraudulent voting, made possible by not requiring proof of voter identification. We need voter ID. Look at it this way: every fraudulent vote means a bullet into one of our law enforcement officers or a soldier. Bye.”

“See you around. And that’ll do it for tonight’s show and so, on behalf of the crew, I’ll be wishing you all a goodnight: Goodnight.