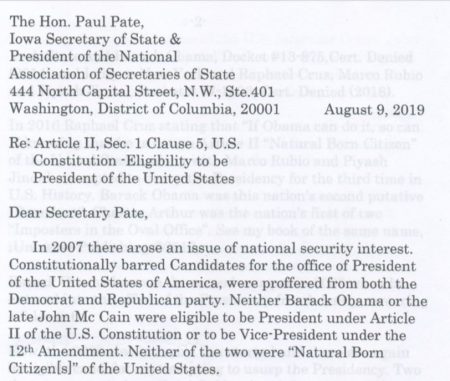 (Aug. 10, 2019) — On Friday, New York State citizen and registered voter Robert Laity wrote to Iowa Secretary of State Paul Pate, who also serves as President of the National Association of Secretaries of State (NASS) based in Washington, DC.

In his three-page letter, Laity expressed concern for the placement of ineligible presidential candidates on state ballots around the country for the 2020 election as well as previous recent elections.

Article II, Section 1, clause 5 of the U.S. Constitution mandates that the president and commander-in-chief of the military be a “natural born Citizen.” While not defined in our founding documents, statements recorded in the Congressional Globe in the 19th century and four US Supreme Court opinions suggest that there was no “doubt” that a person born in the United States to citizen parents is a “natural born Citizen.”

As to other “classes” of citizens, the high court wrote in Minor v. Happersett (1875), “natural born” status was uncertain.

Referring to the previous candidacies of former Louisiana Gov. Piyush (Bobby) Jindal, U.S. Senator from Texas Ted Cruz, and the late Arizona Sen. John McCain, as well as to current presidential candidates Rep. Tulsi Gabbard and Senator Kamala Harris, Laity wrote, “It is clear that there is now a clearly delineated pattern of attempted usurpations of our nation’s highest office by people with dual allegiances and citizenship. This must not be allowed to continue.”

Jindal was born in Louisiana to parents residing legally in the U.S. but who were not U.S. citizens at the time. On the other hand, Gabbard was born in the unincorporated U.S. territory of American Samoa to U.S.-citizen parents and may not meet the definition of “natural born Citizen” embraced by the Founders.

In a recent op-ed, The Post & Email’s Joseph DeMaio said of the “task” of Gabbard prospectively proving her eligibility:

This task arises, of course, because although from all appearances, both of her parents – Carol (née Porter) and Mike Gabbard – were both already U.S citizens on April 12, 1981, Tulsi Gabbard’s birth did not take place within the United States.  Rather, it took place in Leloaloa, Maoputasi County, American Samoa.  As faithful P&E readers also know, under the provisions of § 212 of Emmerich de Vattel’s The Law of Nations – and upon which tome the Founders “continually relied” while drafting the Constitution, including the “natural born Citizen” restriction of Art. 2, § 1, Cl. 5 – in order for one to satisfy the eligibility restriction, not only must the child’s parents be citizens of the nation where the birth occurs, the birth must take place on that nation’s soil.

Further, DeMaio raised the question as to whether or not Gabbard qualifies as a “citizen” to serve in the U.S. House of Representatives.

Harris was born in Oakland, CA in 1964, predating the time when either of her foreign-born, non-U.S.-citizen parents could have resided in the United States long enough to apply for citizenship.

McCain, born in Colon, Panama to U.S.-citizen parents, one of whom was serving as an admiral in the Navy, was the subject of “eligibility” questions dating back to his first run for the presidency in 2000. In 2008, constitutional scholar Jonathan Turley again raised the question, and others declared unequivocally in 2016 that the Canadian-born Cruz was ineligible to serve.

Other legal analysts reasoned that anyone born to one U.S.-citizen parent anywhere in the world meets the definition of a “natural born Citizen” because he or she did not require naturalization.

In the case of Barack Hussein Obama, credible reports of his birth in Kenya or Indonesia were overshadowed by Obama’s claim after entering political life of a birth in Honolulu, HI on August 4, 1961 to a U.S.-citizen mother and British-citizen father. By all accounts, Barack Hussein Obama the elder never became a U.S. citizen and was reportedly forced to leave the country in 1964.

A 5+-year criminal investigation led by former detective Mike Zullo under the authority of the Maricopa County Sheriff’s Office into an image the White House posted in 2011 purported to represent Obama’s “long-form” birth certificate declared it to be a “computer-generated forgery” in early 2012.  Investigators also found Obama’s Selective Service registration form to be fraudulent.. Last year, Zullo revealed on a radio show that two experienced members of the U.S. intelligence community informed him that it is “an open secret” that Obama was, in fact, born outside the U.S.

To the public’s knowledge, no federal-level investigation has been launched into the potential crimes of forgery, fraud, and other possible contemporaneous violations of law associated with the production of fraudulent government documents on behalf of a sitting president.

“I am sending this letter to the respective Secretaries of State and/or other respective State officials responsible for such issues,” Laity closed his letter. “I urge you to keep any candidate for president or vice-president who is not a ‘Natural Born [U.S.] Citizen’ off your respective State’s ballot. I await your response.”

The letter to Pate is below.