WHAT IS A “NATURAL BORN CITIZEN?” 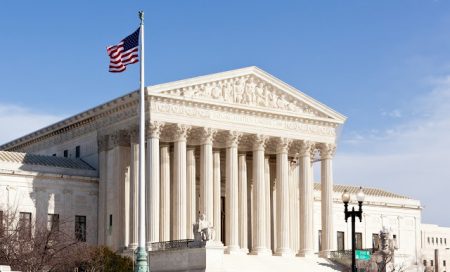 (Jul. 12, 2019) — As he has in the past, New York State citizen Robert Laity on Friday sent a letter to U.S. Supreme Court Chief Justice John G. Roberts, copied to all members of that body, captioned, “Usurpations of the Presidency by fraud and subterfuge; Petition for Redress of Grievances.”

As Laity further noted, he filed a lawsuit originating in the State of New York challenging the presidential eligibility of Barack Obama and more recently, a case claiming that three 2016 presidential candidates were ineligible for the office they sought.

“Since 2008 there has been demonstrated a pattern of usurpations by constitutionally barred individuals to attain, by fraudulent means, to the Presidency of the United States of America,” Laity’s letter continues, citing “Article II, Section I, Clause 5” of the U.S. Constitution, known as the “natural born Citizen” clause.

Laity quoted the court’s 1875 opinion in Minor v. Happersett, which stated that “it was never doubted that all children born in a country of parents who were its citizens became themselves, upon their birth, citizens also. These were natives, or natural-born citizens, as distinguished from aliens or foreigners. Some authorities go further and include as citizens children born within the jurisdiction without reference to the citizenship of their [p168] parents. As to this class there have been doubts, but never as to the first.”

Harris, who is serving her first term in the U.S. Senate from the State of California, was born in Oakland to parents who almost undoubtedly were then citizens of the countries from which they came. Based on her public biography, neither of her parents could have resided in the United States long enough to apply for citizenship. Her father, Stanford University Emeritus Prof. Donald Harris, states on his website that he did, in fact, become a U.S. citizen but not the year in which he was naturalized.

Further, DeMaio found, as a “U.S. national,” Gabbard may not be constitutionally eligible to serve in the U.S. House of Representatives, where she currently represents Hawaii’s second congressional district.

“I move this court to exercise it’s [sic] original jurisdiction authority and take affirmative action to stop this ongoing pattern of unconstitutional incursion into the office of the Presidency of our sovereign nation by persons whom which the founders never intended to admit to said office,” Laity’s letter concludes. 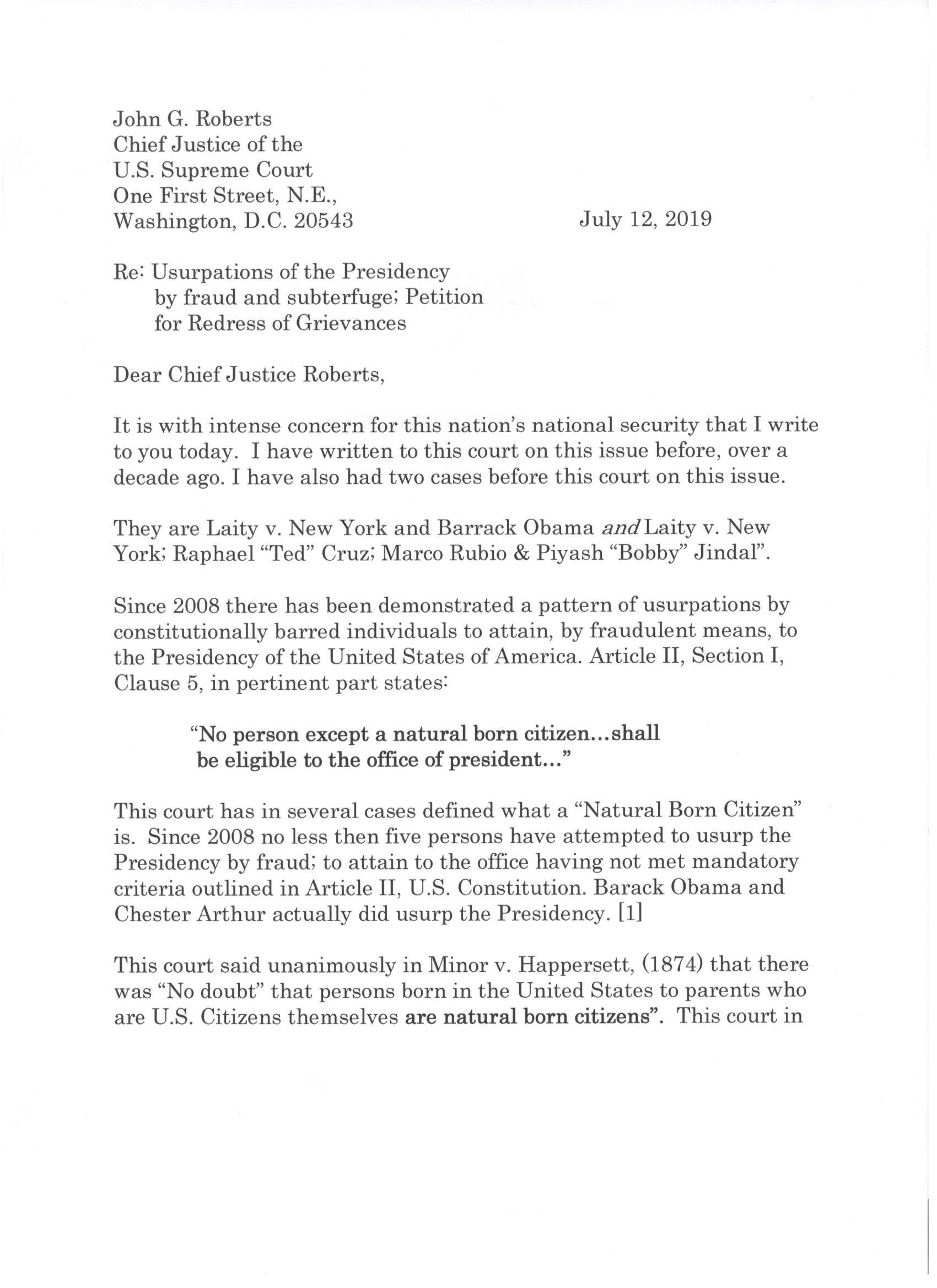 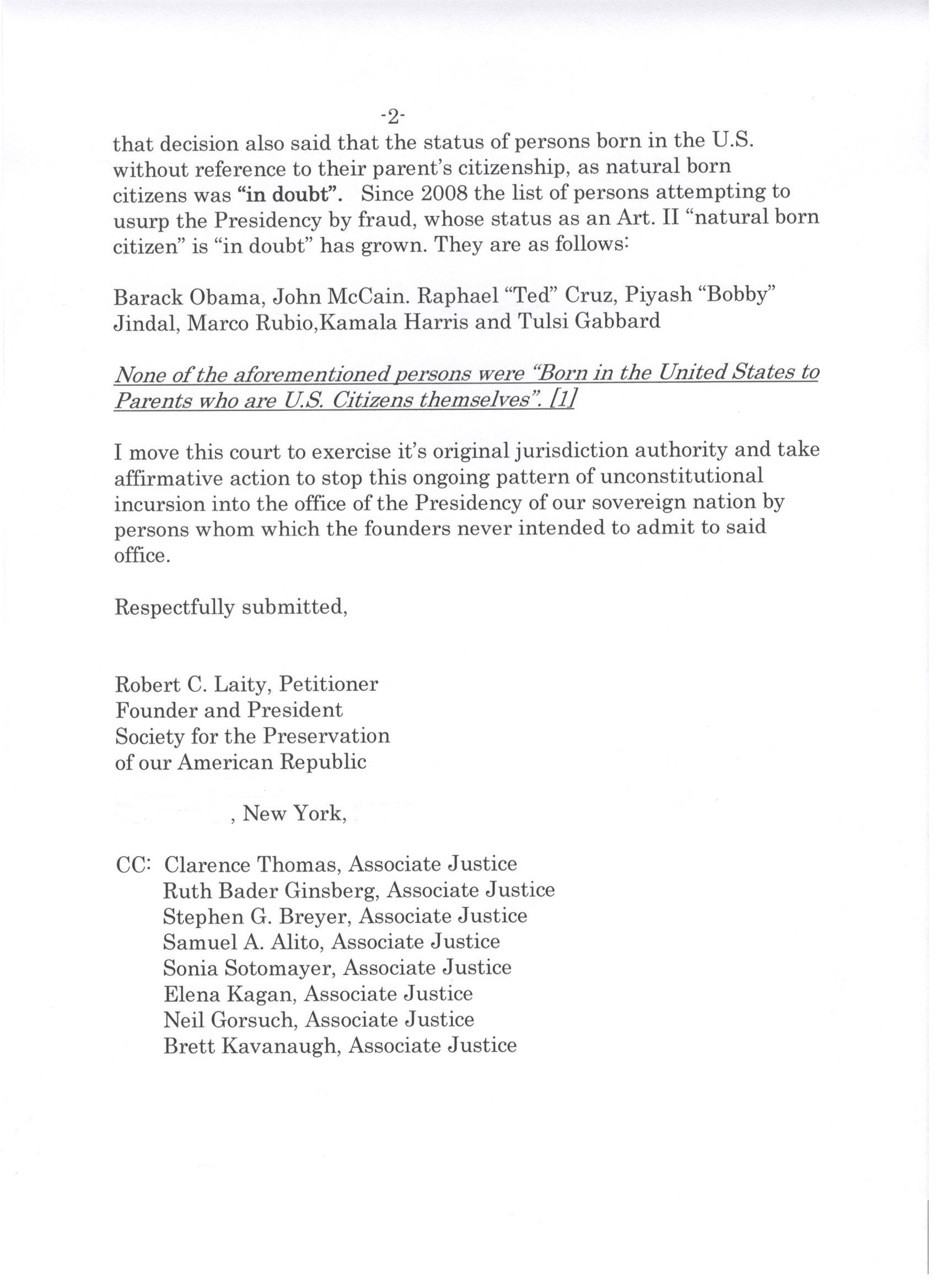