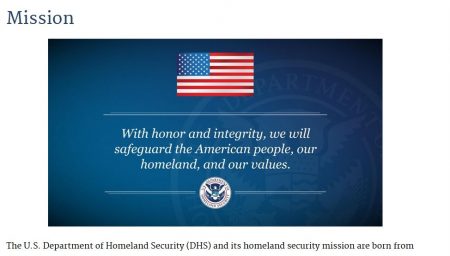 (Jul. 21, 2019) — The Humanitarian Hoax is a deliberate and deceitful tactic of presenting a destructive policy as altruistic. The humanitarian huckster presents himself as a compassionate advocate when in fact he is the disguised enemy.

The Department of Homeland Security (DHS) was established November 25, 2002, by the Homeland Security Act of 2002. DHS is a cabinet department formed in response to the September 11, 2001 terrorist attacks on the homeland. The DHS mission statement is clear, “With honor and integrity, we will safeguard the American people, our homeland, and our values.”

The DHS website describes the department with clarity, and lists its twelve operational and support components:

“The Department of Homeland Security has a vital mission: to secure the nation from the many threats we face. This requires the dedication of more than 240,000 employees in jobs that range from aviation and border security to emergency response, from cybersecurity analyst to chemical facility inspector. Our duties are wide-ranging, and our goal is clear – keeping America safe.”

– Office of Intelligence and Analysis

The enormity of the Department of Homeland Security reflects the seriousness and magnitude of the acknowledged security threats to America in the wake of the 9/11 attacks. The Department of Defense works in the military sphere, while the Department of Homeland Security works in the civilian sector to safeguard America. The mission to safeguard America is unequivocally and unapologetically America-first. There is no ambiguity regarding the priority to protect – America is the uncontested priority.

Let’s review what Homeland Security is pledged to safeguard: 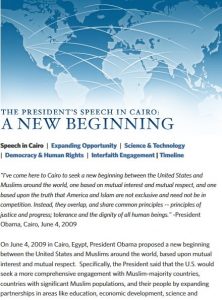 Immediately after 9/11 there was a period of enormous cohesion and patriotism in the country. We were all Americans united by the shock of a terrorist attack and by our shared loss. We grieved together for our homeland. Soon, the grieving subsided and partisan politics began dividing the nation. Barack Obama was elected and delivered his notorious “New Beginnings” speech in Cairo. Obama told the world that part of his responsibility as President of the United States was to fight against negative stereotypes of Islam wherever they appear. WHAT?

The responsibility of the President of the United States is to fight against negative stereotypes of AMERICANS wherever they appear!

Obama’s Cairo speech declared that his personal political priority to protect Islam would became public policy – and it did. Barack Obama’s entire presidency was a violation of the establishment clause. Protecting Islam, not America, became the national priority under Obama. Every imaginable accommodation and religious preference was awarded to Islam at the expense of America and America’s founding Judeo-Christian traditions. How did he do it?

Every sphere of the government was politicized to reflect Obama’s personal pro-Muslim priority, especially homeland security:

Let’s examine them one at a time.

Under the Obama administration factual truth-based training for the military, first responders, police and homeland security was prohibited because it is offensive to Muslims. WHAT??

John Guandolo’s September 13, 2016 article reveals the catastrophic consequences of Obama’s anti-American policies, particularly our suicidal unpreparedness. Guandolo explains how the Islamic battle to establish a worldwide caliphate is preparing for battle in the United States. Separating Koranic Islamic religious doctrine and its supremacist religious sharia law from terrorism is like separating Hitler’s Mein Kampf from Nazism in WWII’s German army. Motivational texts are essential to understanding and defeating the enemy.

The Muslim Brotherhood is the 20th-century multinational organization of sharia-compliant Muslims entrusted with settling America and making it Muslim in the 21st century. Pro-Muslim Obama invited the Muslim Brotherhood into every governmental agency in America. This is the equivalent of Franklin D. Roosevelt inviting the Nazi SS to advise us on our national security.

Obama kept his Cairo promise of a “new beginning” and facilitated the Muslim Brotherhood’s infiltration into homeland security, education, the economy, the State Department, and immigration.

In a jaw-dropping breach of national security, food trucks at airports servicing Middle-Eastern airlines are forbidden to be inspected. WHAT?? 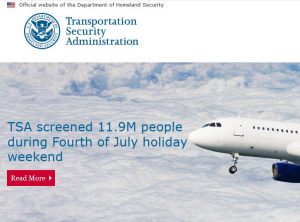 A recent Fox News report revealed that “special exemptions” are awarded by TSA and airport police to food trucks servicing planes headed to the Middle East from Washington D.C.’s Dulles Airport. Former air marshal and whistleblower Robert MacLean says he was blocked from searching a food truck during a random search operation. Robert MacLean was told to stand down. In what stretches credulity, the explanation given was, “specially blessed airline meals have already been searched by an off site private security company.” Further, “The reason we don’t break these seals and do open and look checks is because the public has religious rights under the First Amendment.”

Judicial Watch’s follow-up 7.12.19 report, “A Massive Hole in TSA Security,” affirms that DHS gives the “red carpet to Middle Eastern airlines” and that pre-approved clearance under the program, Secure Electronic Network for Traveler Rapid Inspection (SENTRI), has allowed huge loads of drugs to pass through the border. Customs and Border Patrol agents get into trouble for delaying SENTRI crossers at southern border checkpoints. WHAT??

In case there is anyone who does not understand the ongoing threats to America and the gravity of this breach in airport security, an Iranian was just caught trying to sneak nuke enrichment components out of the United States. According to the DOJ, between 2008 and 2015, Behzad Pourghannad and two other Iranian nationals, Ali Reza Shokri and Farzin Faridmanesh, worked together to obtain carbon fiber from the U.S. and surreptitiously export it to Iran via third countries. Shokri worked for procurement, Pourghannad was the financial guarantor and Faridmanesh the trans-shipper. Only Pourghannad is in custody; the other two remain at large.

Robert MacLean describes the TSA pat-downs and searches as “security theater.” “We are spending all this manpower and hours patting down children and elderly veterans in wheelchairs but the airport workers motivated by greed can smuggle whatever it needs past security.”

Obama has violated the establishment clause in Homeland Security by treating Islam as a preferred religion with the absurd justification that Islamic meals are “blessed” and cannot be searched for security. Domestic airlines and their Judeo-Christian food trucks are regularly searched to insure passenger safety and homeland security.

From the Cairo speech:

“The United States will partner with any Muslim-majority country to support expanded literacy for girls and to help young women pursue employment . . . We will encourage more Americans to study in Muslim communities. And we will match promising Muslim students with internships in America, invest in online learning for teachers and children around the world and create a new, online network so a young person in Kansas can communicate instantly with a young person in Cairo.”

Obama kept this particular Cairo promise by facilitating Common Core and its pro-Muslim curricula courtesy of Pearson Education’s 60% controlling interest in American textbooks. The sharia-compliant Qatari influence in Pearson products is discussed at length in The Humanitarian Hoax of Pearson Education. Pearson is the premier global educational humanitarian huckster hawking its anti-American message of globalism to K-12 students and teachers in America. Its globalized curriculum comports to Obama’s pet Common Core Initiative Standards (CCIS). Globally, Common Core originated from the One World Education concept, a global goal orchestrated by the Connect All Schools program. Its origin is funded by the Qatar Foundation International (QFI) and supported by the United Nations Agenda 2030.

So, Obama’s Common Core pet project with its anti-American anti-Christian, antisemitic, pro-Muslim indoctrination violated the establishment clause by teaching Islam as a preferred religion throughout its curricula.

Obama’s Cairo speech promise on economic development reassured Muslims that, “There need not be contradictions between development and tradition.” Obama invited Middle East investment in America, insisting that their economies could grow enormously while maintaining their distinct Islamic culture. There he goes again – protecting Islam and sharia law at the expense of America and our Judeo-Christian traditions.

Obama’s regulation-killing policies drove manufacturing businesses out of America and invited Muslim investment into the country. Islam’s educational investment in America through Common Core in K-12 also targeted higher education. Money talks. Islam established new Middle East Studies Centers and endowed chairs at universities across the country to influence curricula, knowing that its graduates would influence public policy toward Islam. A 4.27.12 article, “The Saudi Fifth column on our nation’s campuses” by Lee Kaplan states, “The head of the Muslim American Society, W. Deen Muhammed, has stated that Saudi gifts require the receiver to prefer the Saudi ’school of thought.’”

Islam is busy buying influence in America through financial investment including entertaining targeted Washington swampsters. The Investigative Project on Terrorism (IPT) reported on the Democrats’ December 2018 trip, “Qatar Paid for Congressional Democrats’ Doha Trip.” Qatar is one of the biggest funders of the Muslim Brotherhood and is home to its spiritual leader, Sheikh Yusuf Qaradawi. Islam is buying influence with the protection of the mainstream media that refuses to report the encroaching influence of Islam and Islamic sharia law in America.

Obama kept his Cairo promise of expanding the economies of Muslim countries and preserving their Islamic identity at the expense of America and American economic and cultural interests.

Perhaps Obama’s most devastating domestic policy was the mass importation of sharia-compliant refugees with hostile norms.

The biggest lie in Obama’s Cairo speech was his declaration that:

“We will, however, relentlessly confront violent extremists who pose a grave threat to our security because we reject the same thing that people of all faiths reject, the killing of innocent men, women, and children. And it is my first duty as president to protect the American people.”

Ex-president Barack Obama is the humanitarian huckster-in-chief whose anti-American, pro-Muslim policies in the Department of Homeland Security continue to protect Islam at the expense of America. Homeland Security and every one of its 240,000 employees working for its twelve operational support components must be re-schooled on the threat of Islamic sharia law starting with the insanity of the “blessed” food trucks and focusing on the seditious Muslim Brotherhood.

It is imperative that President Trump declare the Muslim Brotherhood a terrorist organization. In its own words, the 1991 Muslim Brotherhood Explanatory Memorandum on the general strategic goal for the group in North America defines itself as an enemy of the United States whose objective is settlement and making America Muslim.

3 Responses to "The Humanitarian Hoax of Department of Homeland Security’s Security: Killing America With Kindness – Hoax 40"