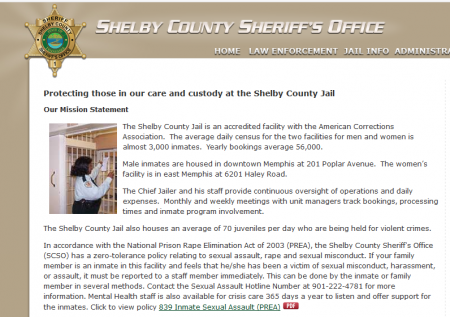 (Nov. 15, 2018) — Earley Story of Memphis, TN has been preserving evidence for more than 20 years after being accused by the Shelby County Sheriff’s Office (SCSO) of selling marijuana on the street while he was employed as a county jailer.

Now 65, Story told The Post & Email in an interview on Monday that he was framed not once, but twice, by his former employer after filing a complaint about conditions in the Shelby County jail with the NAACP as well as reporting them to the Memphis office of the FBI.

Story’s description of conditions and incidents in the jail is supported by a January 2001 article at Salon.com titled “The Jail from He**.” [Editor’s Note: The article is extremely disturbing and not for children.  The Post & Email has referenced it to illustrate the correlation between Story’s claims and Salon’s investigative report published several years later.  Story provided a hard copy of the article to us prior to our interview.]

As The Post & Email has reported over more than nine years, Tennessee judges, prosecutors and their assistants wield unchecked power, rarely receiving a rebuke in even the most egregious cases of misconduct and possible criminal activity.

For the last 2+ years, The Post & Email has received correspondence from inmates at the Shelby County jail at 201 Poplar Street in Memphis.  Nearly all inmates who have communicated with us say, as did Story, that the district attorney general’s office is thoroughly corrupt, and many claim to have been falsely accused and incarcerated for more than a year without trial.

In two additional letters received since August, Shelby County inmate Datel Taylor continues to say that he was framed by jail investigators for a 2015 murder he did not commit. After first hearing from Taylor at this time last year, we sent a letter to his then-public defender with a copy of his claim.  Our correspondence went unanswered, after which Taylor informed us that the attorney was no longer serving in the public defender’s office.

Taylor, who wrote that he takes medication for a mental-health condition, claimed that statements he gave investigators were “altered.”  He has expressed concern for news reports issued after he was charged claiming that he confessed to the crime when he said he did not.

A July 2017 study by the Fair Punishment Project, an initiative of Harvard University, found current Shelby County District Attorney General Amy Weirich to be the “most overzealous prosecutor” within a five-year period among four states.  Early last year, she received a private admonishment from the Tennessee Supreme Court for her courtroom conduct in a case which made national news on the arrest, trial and conviction of Noura Jackson for the 2005 murder of her mother.

In a more recent case, two women named as co-defendants in an alleged Memphis drug ring filed suit against Weirich and other parties in federal court after one of the women discovered that her text messages, which Google automatically saves to her email account, were altered by “investigators” to make it appear as if she were participating in a drug transaction. Both women, as well as the mother of one of them who was also accused, were shortly thereafter dropped from the case.

The two plaintiffs, Celitria Watson and April Malone, did not originally know each other, nor did they know any of the other 14 co-defendants.  Celitria is the sister of Kendrick Watson, now a Tennessee state inmate as a result of the same case, who claimed in a lawsuit of his own that Shelby County prosecutors and members of the Memphis Police Department used “fake evidence” to send him to prison.  Malone is Kendrick Watson’s girlfriend.

Weirich’s office has refused to respond to our requests for comment on the convictions last year of TDOC inmate Jason Lamar White and Kristina Cole after a third accused, inmate Montez Mullins, confessed to the crime and claimed the others were uninvolved.  The reported admission by the officer who processed Cole through the local police department to sending text messages from Cole’s phone to make it appear that she was expecting a package of drugs at her home made no difference to the judge nor the jury during the trial.

Story told The Post & Email that the 30th Judicial District (Shelby County) prosecutor’s office was just as corrupt in the late 1990s as it is today. As an example, he cited what he said was prosecutors’ knowledge of the dangerous conditions within the Shelby County jail and their failure to take any corrective action.

Story began his law-enforcement career in the “city jail” in 1979.  Two years later, he transferred to the Shelby County Sheriff’s Office.  “In 1981, I was doing my job, learning procedures and walking by the law,” he told us.  “All of a sudden, it turned and Shelby County jail got very violent.  They were hostile, and there was no oversight, and it was very dangerous to work inside. My job was protecting the inmates, and they just weren’t doing it.”

As time went on, Story said, he became a whistleblower against the sheriff’s office.  “In 1989, I got in touch with the federal court because of the violence in the jail after they assaulted some inmates unjustifiably,” he said.  “Some other officers and I went to the NAACP and filed a complaint of police brutality because the Tech Squad came in and beat up a bunch of inmates.  The complaint wound up in the courts.”

Overcrowding and an insufficient number of officers were observed in a 2000 U.S. Justice Department report following the opening of an investigation and court-recommended oversight of the Shelby County jail.  Also referred to by Salon, the investigation cited the facility for excessive use of force, inadequate food service, short-staffing, inadequate inmate safety, and lacking in medical and mental-health care, among others.

According to the Salon article, “more than a dozen” civil lawsuits were pending against the Shelby County jail and related defendants at the time.

A copy of a report dated March 22, 1995 which Story preserved mentions him as one of two officers who attempted to render aid to an injured inmate.  Officer “R. Hardy” wrote in his report that before he was taken to the hospital in an ambulance summoned by jail nurses, the inmate said only that he “was jumped on when returning from the shower…”

According to the report, the inmate was jailed as a result of a parole violation.

Story wrote across the top of the report’s first page, “THIS INMATE DIED.” 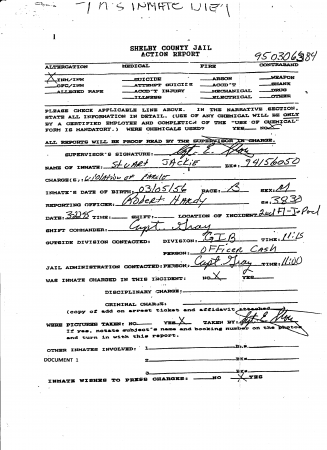 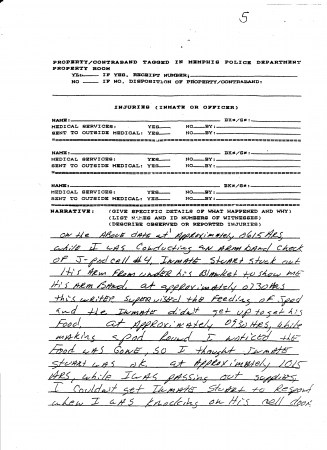 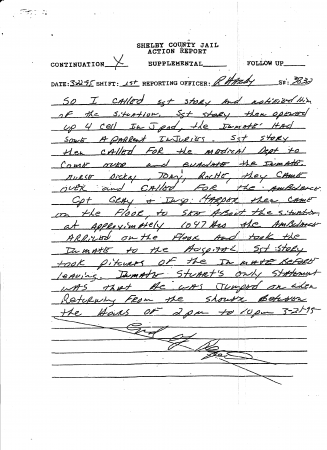 In 1996, Story was assigned the “gang intelligence officer” within the jail.  “This assignment was made only because somehow the department had found out that I had been gathering information and giving it to the Memphis FBI, agents Don McDonald and William Rasmussen,” Story wrote to us in a preliminary letter. “When the Sheriff’s Office found out that I was giving information to the FBI concerning the abuse, the FBI allowed my employer to frame me on drug-selling marijuana charges.”

“That’s what started it,” Story continued. “After I testified against the Sheriff’s Office, I got a lot of people angry.  I had to walk the straight and narrow after that, but there was a witch hunt on for my job, and I had to be very careful.  One of the other guys got fired, and one left.  I made sure that I kept records of everything that I was doing from 1995 until I was arrested on January 31, 1997.”

Judge Ann Pugh dismissed the first case against Story after finding insufficient evidence that he committed a crime. However, Story said, directly afterward, on the same day, he was rearrested by the SCSO and recharged.

Story was employed at the jail through early 1997, when he said he was terminated while on vacation just before he was arrested.  Although the first charge was unsuccessful, he was convicted of the crime in 2001 and has subsequently been unable to find full-time work, he said.  Story said he is “100% innocent” of the charges and has been attempting to expose the corruption which enabled his prosecution in the first place. 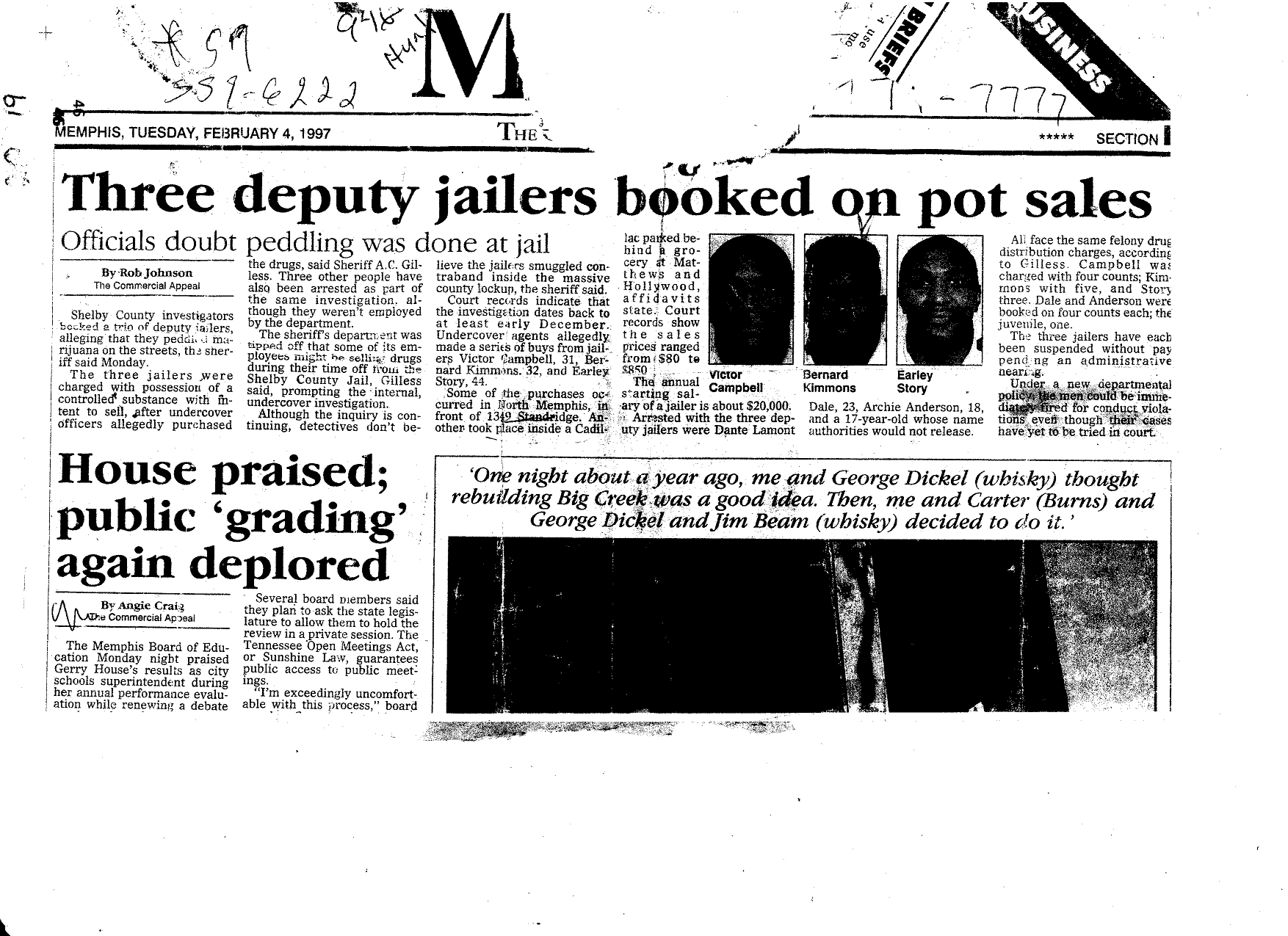 “What motivated you to stay as you witnessed the abuses in the jail?” we asked, to which he responded, “Right in the midst of knowing I was under scrutiny, so many complaints were coming in about inmates being assaulted, sexually and physically.  So I kept those records, and when I found out that a lawsuit was pending against the Sheriff’s Office, I was giving information to several lawyers about the abuse.  One of the lawyers ended up being my lawyer.  His client, the inmate who was assaulted, died. I was the one who discovered the inmate’s death, and I approached the lawyer figuring he would be willing to represent me.  But that turned out not to be the case.”

After he was exonerated the first time, representing himself, Story filed a complaint with the EEOC as well as a federal lawsuit in an attempt to regain his former position.  Of that, he told us, “When I filed my pro se lawsuit in 1997, the judge ruled that I should be back on my job, but they never hired me back.  They didn’t honor the judge’s ruling.”

Story’s saga became more complicated following his second arrest, he said.  “My trial was December 9, 1999.  They found me guilty of one count of unlawful possession of a controlled substance, and then they said they would immediately sentence me, but they did not.  There was no sentencing at all then.  I retained a lawyer for $10,000 and filed a direct appeal to the Tennessee Supreme Court.  In some way, they got to him, and I lost on direct appeal.  So I filed a post-conviction appeal, and that’s when they gave me ten days.”

“Did you spend the ten days in the Shelby County jail, where you used to work?” we asked, to which Story replied, “Yes, I did.”

Speaking of the sheriff’s office and Shelby County prosecutors, Story said, “They have so much power they can do whatever they want to do.  Initially they charged me with three counts of unlawful possession of a controlled substance.  Later on, I found out I paid a $10,000 bond for two counts.  So it’s a ball of confusion.  They accused me of being with three other co-defendants, one of whom was a juvenile, but we had never met each other.  I recorded them in court, and all of us said the same thing.  The sheriff at the time, A.C. Gilless, had a lot of power, and the district attorney general and all of them seemed to be in the same sorority.”

Story then said, “This is what’s so scary:  The juvenile charged came up dead after he gave statements to the FBI.  He got shot in November 1998.”

Although 20+ years have passed since he worked in the Shelby County jail, Story said he does not believe conditions have improved appreciably there, if at all.