WHEN IS EVIDENCE “SUFFICIENT?” 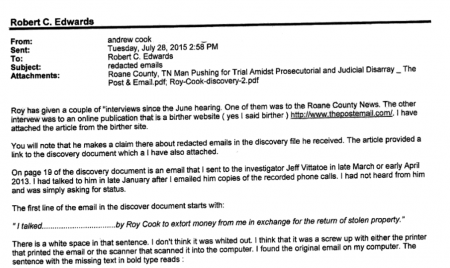 (Oct. 29, 2018) — In the case of State of Tennessee v. Roy Cook, 2013-CR-197, which was dismissed by the prosecution in June of last year, the question of information missing from an email exchanged between Cook’s accuser and the prosecutor was left unresolved.

According to Andrew Cook, his twin brother confiscated a number of circuit boards associated with Andrew’s business, then attempted to “extort” $30,000 in exchange for the boards’ return.  Roy Cook denied that he ever attempted to bribe or extort Andrew.

The two men have been feuding bitterly for decades, Roy Cook informed The Post & Email.

As long-term readers of The Post & Email are aware, Tennessee permits criminal court judges to hand-pick the foreman of each county grand jury without a vetting process.  The grand jury foreman is then permitted to “serve” for unlimited consecutive years or decades at the pleasure of the judge, thereby becoming a court employee of sorts.

Grand juries issue indictments if the members purportedly believe that enough evidence exists pointing to the commission of a crime.  If the grand jury members are unconvinced, they issue a “No True Bill.”  Both indictments and “No True Bills” are signed by the District Attorney General or one of his deputies.

After a Davidson County grand jury foreman was found in 2013 to have himself been a convicted felon, a violation of TCA 22-1-102, affecting hundreds of cases during his tenure, the District Attorney General began to require that all prospective jurors, including grand jury foremen, undergo a criminal background check to avoid such complications in the future.

In 2012, Tenth Judicial District resident Walter Francis Fitzpatrick, III discovered a set of laws passed in 1984 which ordered Tennessee’s county criminal courts to disband and reform into multi-county jurisdictions, or “judicial districts.”  While the districts were formed — in most cases consisting of four counties each, as in the Ninth and Tenth Judicial Districts — county criminal courts continue to operate independently of one another and impanel their own grand juries and trial juries.

The 1984 laws have never been repealed.

Prosecutors declined to present Andrew Cook’s claim against Roy Cook to the grand jury; therefore, Andrew made the case himself in October 2013.

Roy Cook claimed that none of the five attorneys with whom he interacted, including the last, who acted as “elbow counsel,” made an effort to argue that he was not guilty of the “extortion” of which he was accused and maintained his innocence.  Roy Cook did not file complaints against Alan Moore, his third attorney; Jedidiah McKeehan; the fourth, or Stephen McGrath, the “elbow counsel,” although he said they were “not much help and seemed more interested in maintaining a working relationship with the prosecution instead of preparing a proper defense.”

Emails exchanged between Andrew Cook and Ninth Judicial District Deputy Attorney General Robert Edwards on July 28 and October 15, 2015 show that the partially-missing email in question was discussed and said by Andrew Cook to be missing a reference to a time frame rather than a name.  On November 18, 2015, Andrew Cook sent the non-redacted email to Robert Edwards (two days after Edwards was ordered to produce it by Judge Eugene Eblen, who retired at the end of that year).  “Edwards NEVER turned over the email to the defense,” Roy Cook told us.  “In fact, he continually denied its existence.  The only way I obtained the non-redacted email was through a Freedom of Information request. Ironically, it was Edwards who sent 265 pages of emails to me.  It appears to me that the emails were put together quickly, as they also included emails from two other people’s cases who had nothing to do with my case.”

There are other emails dated after Edwards received the non-redacted email from Andrew Cook.  One of them, dated April 14, 2016, shows Andrew Cook informing Edwards that Roy Cook was still complaining about the non-redacted email.  In that email, Andrew Cook wrote, “I provided you a copy of the complete original email with the missing information in December.”  The very next day, April 15, 2016, Edwards was in court at a status hearing and said (see transcript) “Roy Cook has everything I have in the context of that email.”

In Joshua Hedrick’s response to the BOPR complaint last year, he stated that he asked Edwards for a “non-redacted copy” of the email.  However, he then claimed, “I have known Mr. Edwards my entire career and know him to be a scrupulously honest man. His answer was sufficient for me to believe that the files of the prosecution did not contain an unredacted copy.”

Hedrick ceased to be Roy Cook’s attorney in March of 2016.

In a letter from Edwards to Jedidiah McKeehan (attorney #4) dated September 16, 2016, Edwards again mentioned the redacted email, writing, “I have worked this question over and over with Josh Headrick [sic] and I cannot produce any more email. Mr. Cook believes we have it but we do not and we do not intent [sic] to subpoena any additional email from any source.”

“By this time Edwards had the non-redacted email for ten months,” Roy Cook said.  “Andrew let him know he had it and Edwards still denied having it.”

Edwards’ final lie about the email occurred on March 31, 2017 in his response to my Motion to Dismiss for Prosecutorial Misconduct.  In his response Edwards says “The undersigned has corresponded with witness Andrew Cook about the email in question and provided all responses received to the defendant or his counsel in an effort to be as forthcoming as possible with the defense but this has been done to no avail. Andrew Cook insists there is no unredacted email and he cannot obtain additional copies.”  He went on to say, “Such email is not in the possession or constructive possession of the State.”

The non-redacted email is important because it reveals Andrew Cook had no contact with Investigator Jeff Vittatoe from January 30, 2013 to April 9. 2013.  The date and redaction on the email led me to review the Vonage phone logs for what inspired Andrew Cook to contact Vittatoe on that day and it reveals Andrew’s true motive for pursuing an indictment.  Edwards did finally admit on June 5, 2017 in a meeting with my defense team and me that he believed the email had been whited out but could not say who did it.  This meeting was secretly recorded by Private Investigator Craig Ward and confirms Edwards’ statement to that effect.

Roy Cook has filed a new complaint with the BOPR and supplied them with evidence of what he calls Edwards’ “deception.”  The complaint states that Edwards “lied to two judges in court on three occasions.”  “He lied to Judge Eblen on November 16, 2015 when he said he couldn’t get the email.  He lied to Judge Wicks on April 15, 2016 when he said he didn’t have the email.  Then he lied March 31, 2017 when he presented his response to my motion to Judge Wicks again.   This is clearly an ethical violation.  He withheld the evidence after being ordered by a judge to turn it over, lied in court to judges, and then lied to defense counsel about it, too,” Roy Cook told The Post & Email on Friday.

“In last year’s decision on my complaint against Edwards for concealing the existence of a forensic analysis of the computers taken from my home, the BOPR believed Edwards’ story blaming the concealment on sloppy police work where investigators didn’t keep good records.  They gave Edwards the benefit of the doubt and even I thought that possible.  However, the issue with concealing the non-redacted email can NOT be explained away as a result of anything other than complete deception and should make the BOPR reconsider Edwards’ entire response from last year,” Roy Cook said.

In documents received as a result of a public records request, Roy Cook received a copy of a letter written by an attorney representing Hedrick marked “DO NOT FORWARD TO COMPLAINANT” (pp. 10-14 of uploaded attachment).  In the letter, Atty. Gregory Brown of Lowe, Yeager & Brown of Knoxville thanked Steven Christopher of the BOPR for “agreeing not to forward this response to Mr. Cook.”

“Mr. Cook is a conspiracy theorist who is on a crusade to bolster his various conspiracy theories.  This should be plain when you survey the complaints Mr. Cook has made against nearly every attorney in any way connected with the criminal charges against him — both prosecutors and several of the five defense counsel that represented him — and his propensity to publish the correspondence online along with extensive commentary,” Brown continued. 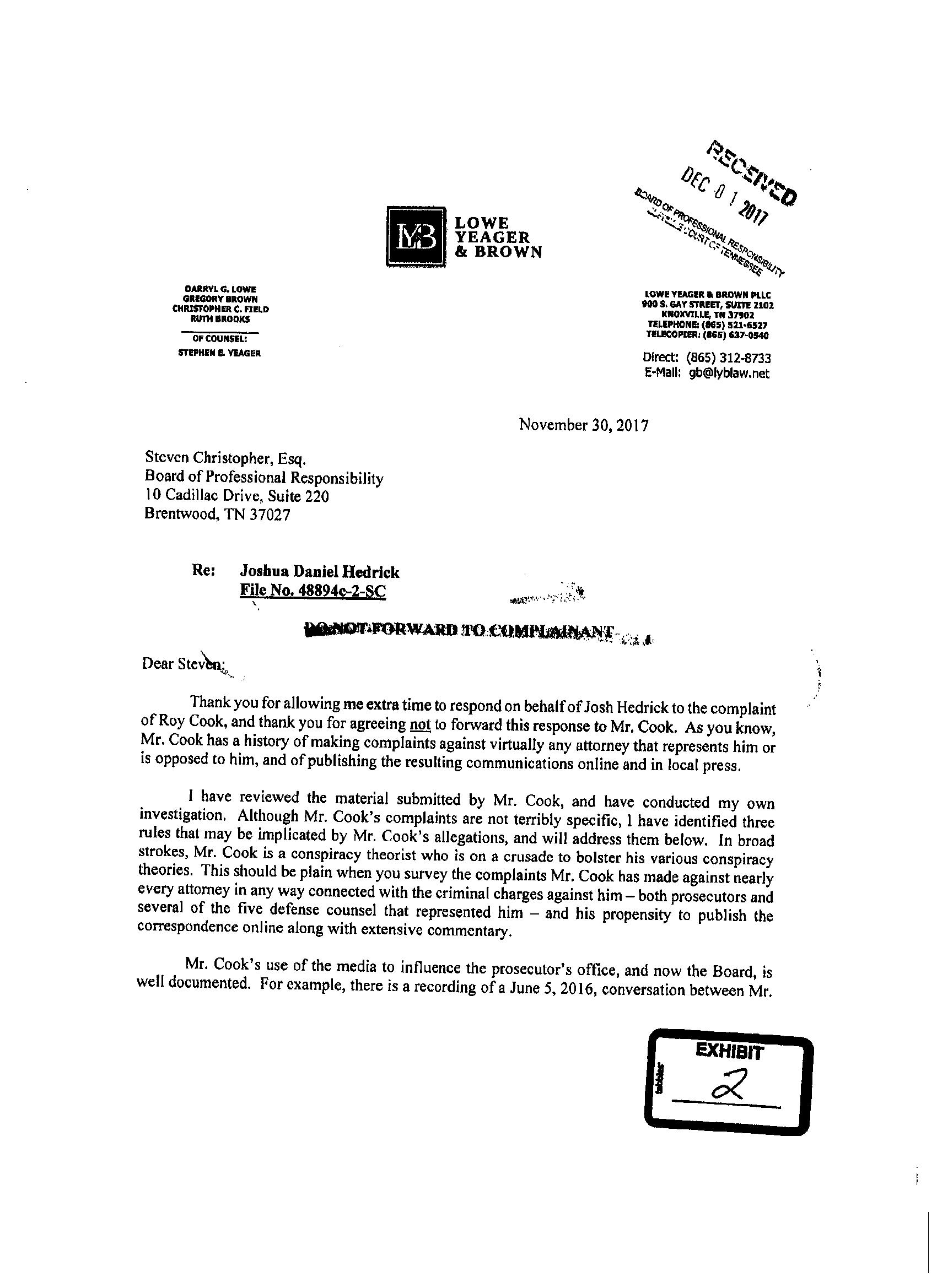 Just after 8:30 AM EDT on Monday, The Post & Email left a voice message on Brown’s office phone requesting comment on his letter to the BOPR in regard to his use of the term “conspiracy theorist” in reference to Roy Cook and his apparent objection to  Cook’s having approached the media about his concerns that the Ninth Judicial District prosecutor’s office has acted unethically in his case.