(May 23, 2012) — While preparing his defense against the charge of “tampering with government records” issued from the “Monroe County Criminal Court” by an unknown accuser, Walter Francis Fitzpatrick made an astounding discovery:  county criminal courts were made illegal by the state legislature in 1984.

Fitzpatrick has long said that the courts in Monroe County, TN as well as other counties in the state are operating outside the law and state and U.S. Constitutions because of hand-selection of jurors by judges, forged signatures, false arrests, and foremen serving for years and sometimes decades.  Others have agreed that the grand juries and trial juries are rigged.  The discovery of the following legislation confirms the complete corruption of the county criminal courts, as they were disposed of nearly three decades ago by the people’s representatives of the state of Tennessee.

In 1984, the Tennessee General Assembly passed a set of laws which designated judicial districts and prohibited the operation of the Tennessee county courts for criminal matters.  Just as the U.S. Congress has the authority to set forth the types of cases heard by federal courts, the state legislatures have the same oversight over the state courts.

Since that time, however, Tennessee county courts have been flouting the law by continuing to adjudicate criminal matters.

The documents were first located in hard-copy format in the Athens, TN Public Library in a “2009 Replacement” book containing Tennessee Code.

The first of several laws dealing with reorganization of the court system in Tennessee reads:

(a) The general assembly expressly declares that its purpose in enacting this part is to reorganize the existing trial court system of this state in such a way that its growth occurs in a logical and orderly manner. It does not have as its purpose the abolition of any court or judicial office.

(b) Nothing in this part shall be construed as altering, diminishing or abolishing chancery court or the constitutional and historical distinctions between chancery court and circuit court.

Several sections follow which designate the titles which judges were to retain upon the enactment of the new laws.

TCA 16-16-101 stipulated that the county courts were to handle matters of probate “and other business entrusted to it,” but criminal matters were to be handled by the new district courts.

Section 16-2-506 laid out the redistricting plan for the courts, which formed judicial districts comprising several counties, with the exception of Anderson, Blount, Sullivan, Knox and several other counties, which became judicial districts unto themselves.  County criminal courts were thereby abolished. 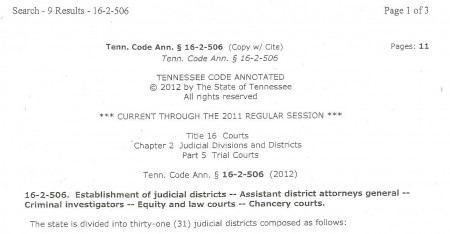 Page 3 of TCA 16-2-506, consisting of two paragraphs to include the Tenth Judicial District.  The remaining text not included here describes the remaining 21 districts created by the legislature in 1984

The “Tenth Judicial District” was delineated to comprise the counties of Monroe, McMinn, Polk and Bradley.  The term “district attorney general,” therefore, refers to the lead prosecutor of each judicial district.  While the title was invoked for that position and used on documents issued by Monroe County, the provisions of the law were not.  Tennessee county courts continue to empanel grand juries to review criminal cases in contempt of the legislature’s mandate to this day.

The way in which grand juries were to be seated in each judicial district was laid out in TCA 16-2-510: 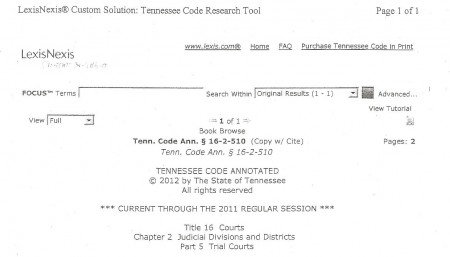 In regard to grand juries, section (c) states:

(c) New grand juries shall be impaneled at least twice a year at times selected by the presiding judge of the district.  The presiding judge within each district shall be responsible for designating the foreperson and for impaneling, charging and receiving the report of the grand jury, but may designate another judge to perform these responsibilities.  In those districts in which there is a criminal court judge or judges, the criminal court judge or judges shall perform the duties pertaining to the grand jury assigned to the presiding judge by this subsection (c).

The law therefore stipulated that the judge could, in fact, choose the grand jury foreman, but a grand jury was to be assembled only in a district court “at least twice a year.”  The foreman would presumably be dismissed along with the other grand jurors when their work was completed.  The “district” system would have allowed for a larger pool of potential jurors than with the old “county” system.

Documents and decisions issued by a criminal county court or grand jury are therefore unlawful and invalid in the state of Tennessee.

In 2008, the Tennessee General Assembly passed another law, TCA 22-2-314, which stated that jurors were to be chosen by automated means.  That law has also been ignored by the judges of the state in many instances, particularly in Monroe County.  The laws on record and indicated as current render any actions by “county criminal court” judges illegal and invalid.

The 1984 laws would appear to validated the citizen’s arrest of Gary Pettway, the “Monroe County grand jury foreman” of 27 years.  Had the district courts been operating as mandated by the Tennessee General Assembly in 2010, there would have been no need for a citizen’s arrest, and Darren Huff would not be incarcerated today.

At 1:57 p.m. today, Fitzpatrick submitted a series of 25 motions with 24 attachments to the “Monroe County Criminal Court,” including the 1984 laws which outlawed such “criminal courts.”  A package has been sent to Judge Walter C. Kurtz and one will be delivered to the filing clerk at the district attorney general’s office.  The next “hearing” in Fitzpatrick’s case is scheduled for June 28, 2012.

Why the courts never conformed, or were never compelled to conform, to the laws passed in 1984 is unknown.

How many people have been indicted and convicted by the illegal “grand juries” and “county criminal court” judges over the last 28 years?

Bombshell: Tennessee County Criminal Courts were Outlawed in 1984 but Have Continued to Operate for the Last 28 Years added on Wednesday, May 23, 2012

4 Responses to "Bombshell: Tennessee County Criminal Courts were Outlawed in 1984 but Have Continued to Operate for the Last 28 Years"