“THE INVESTIGATORS SHOULD BE LOCKED-UP” 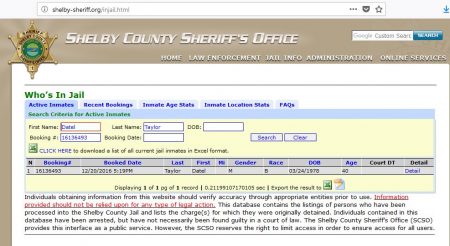 (Jun. 1, 2018) — In a letter received on Thursday, Shelby County, TN inmate Datel Taylor reported that his public defender has left her position and that his family has shunned him as a result of a false murder charge.

Taylor has contacted us on two previous occasions in which he claimed that statements he gave to investigators about the murder of his girlfriend in November 2016 were altered to indicate that he offered a confession instead of a denial of the charge.

As Taylor stated, local media reports say that he confessed to the murder.  As in his two previous letters, Taylor accused investigators of ordering the transcriptionist present at his interrogation to alter his statements. “The investigator should be locked-up for lieing which is altering statements against me,” Taylor wrote. “They has violated my rights to the full, now no one onece me around, and my fight have turned from me.” [sic]

A letter dated November 30, 2017 sent by this writer to his then-attorney, Anna B. Hamilton, pointing to Taylor’s claims of innocence and our published articles containing his letters received no response.

Over the last year, several defendants and inmates accused of crimes in Shelby County, which includes the city of Memphis, have reported that the accusations made against them were tainted with false evidence and corruption on the part of police, judges, and the prosecutor’s office headed by District Attorney General Amy Weirich.  Charges against former co-defendants Celitira Watson and April Malone were abruptly dropped after Watson demonstrated to her attorney that text messages used to incriminate her in an alleged drug-running scheme were altered by investigators.  In late March, the former co-defendants filed a lawsuit in federal court in an attempt to clear their names and receive just compensation for the trauma they endured.

In March of last year, Weirich received a “private reprimand” for her conduct relating to the case of Noura Jackson, which made national news. Weirich was also found by a Harvard University study to have earned the title of “most overzealous prosecutor” among her peers in the states of Tennessee, Louisiana, Missouri and California between 2010 and 2015.

Since 2009, The Post & Email has been reporting on Tennessee’s unconstitutional grand juries wherein the grand jury foreman is hand-selected by the criminal court judge outside of the normal summonsing and screening processes mandated by law to preclude human interference.  Such foremen often serve for years, if not decades, at the judge’s pleasure.

From there, judges and prosecutors have been reported as having worked together toward a common goal of seeing defendants convicted, thereby depriving them of constitutional due process set forth in the Fifth, Sixth, and Seventh Amendments to the Bill of Rights.

Article I, Section 9 of the Tennessee Constitution also guarantees “That in all criminal prosecutions, the accused hath the right to be heard by himself and his counsel; to demand the nature and cause of the accusation against him, and to have a copy thereof, to meet the witnesses face to face, to have compulsory process for obtaining witnesses in his favor, and in prosecutions by indictment or presentment, a speedy public trial, by an impartial jury of the county in which the crime shall have been committed, and shall not be compelled to give evidence against himself.”

Taylor has been in the Shelby County jail since December 20, 2016 and to our knowledge, not faced trial on a previous charge or the murder charge.  His letter appears below. 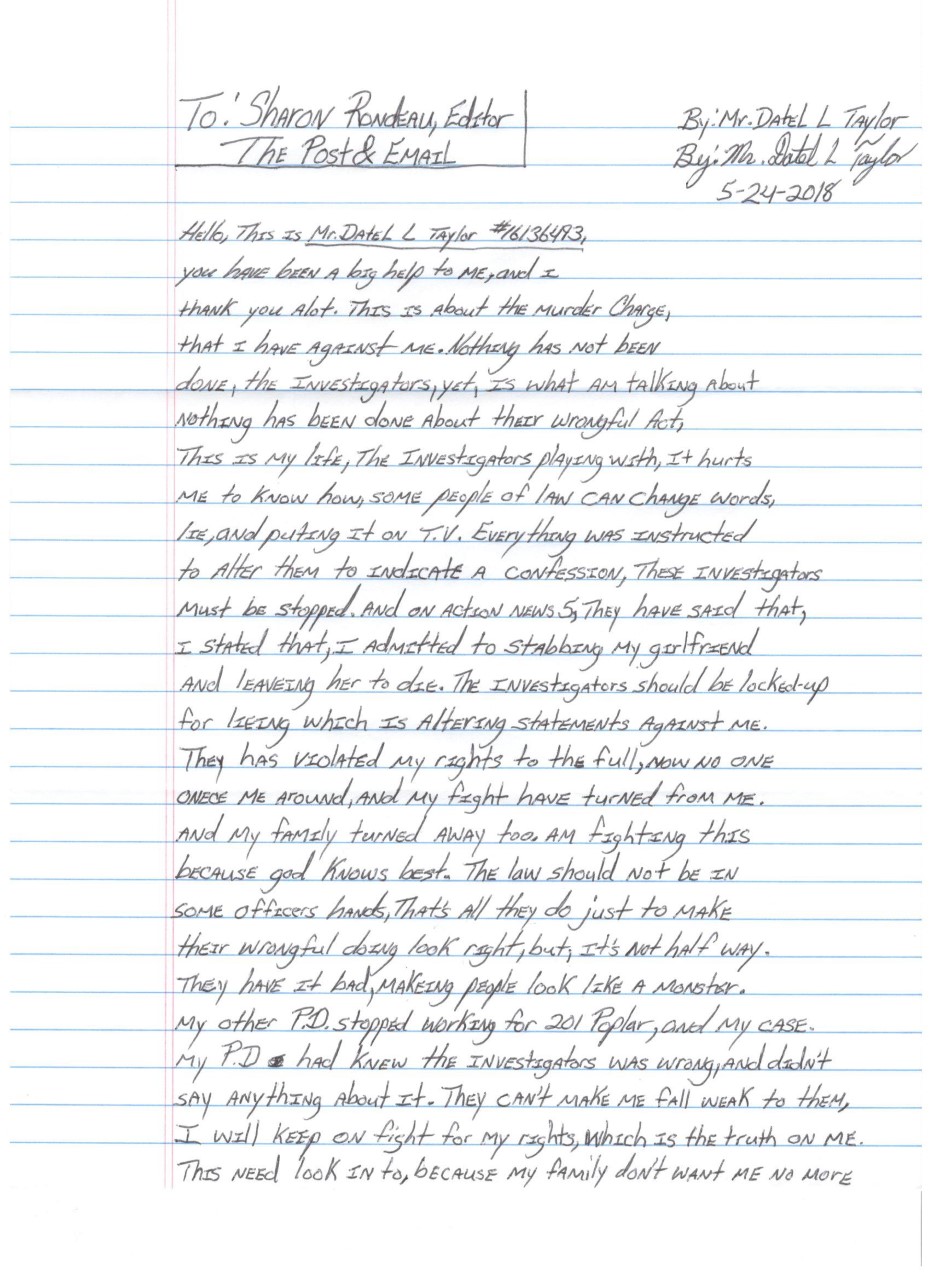 One Response to "Shelby County, TN Jail Inmate Continues to Insist He is Innocent of Murder Charge"