“MY ONLY CRIME IS BEING KENDRICK’S SISTER”

(Nov. 11, 2017) — Following the publication of two articles on the conviction of Tennessee inmate Jason Lamar White in Shelby County, TN, The Post & Email was contacted by two women who said they were falsely arrested, accused, and exonerated in a different case by the same prosecutor, Assistant District Attorney General Chris Scruggs.

The case involving the women sentenced Kendrick Watson, who was already in prison, to another 12 years behind bars and captured his sister, Celitria Watson; Kendrick’s girlfriend, April Malone; and Malone’s mother, Patricia Malone, in its dragnet before the three were “severed” from the prosecution on August 4, 2017.

In a striking similarity, White received an additional 60 years in prison for his alleged role in arranging for the delivery of a drug shipment to the home of his girlfriend, Kristina Cole, in February 2016 despite a recorded confession from a different inmate aired in court during the trial last summer.

Scruggs works as the narcotics-case prosecutor within the Shelby County District Attorney General’s office headed by Amy Weirich, who received a private reprimand from the Tennessee Supreme Court earlier this year for her conduct in the widely-publicized Noura Jackson case.

Weirich was elected in 2014 to an eight-year term.  In a recent study, she was found to be the most-frequently overturned prosecutor in all counties within each of the four states of Tennessee, Louisiana, California and Missouri.

Over the last 15 months, The Post & Email has received dozens of letters from inmates at the Shelby County jail alleging false accusations and misconduct on the part of the DAG’s office.

The most recent of those letters arrived last week from Datel Taylor, who had already been booked into the Shelby County jail when he was brought to an interrogation room, questioned about the murder of his girlfriend on November 10, 2016, and officially charged with the crime.

In his letter, Taylor claimed that his responses to the questions asked of him were altered when put to paper on the order of his interrogators.

As reported in the White story, Scruggs has declined to communicate with The Post & Email, and the DAG’s office does not appear to have a media contact person.

Grand juries in Shelby County, which issue indictments against local citizens after reviewing evidence, contain a foreman and foreman pro tempore, both of whom are handpicked by the criminal court judge in violation of Tennessee law.

On November 4, Celitria Watson spoke with The Post & Email at length in a recorded telephone conversation, after which she dispatched documentation of her arrest and ultimate removal from the case in July along with the two others. 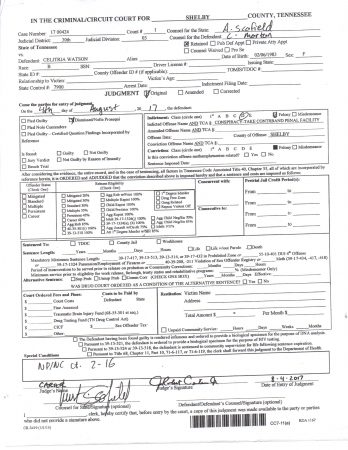 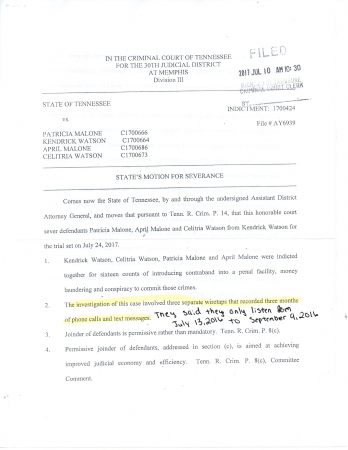 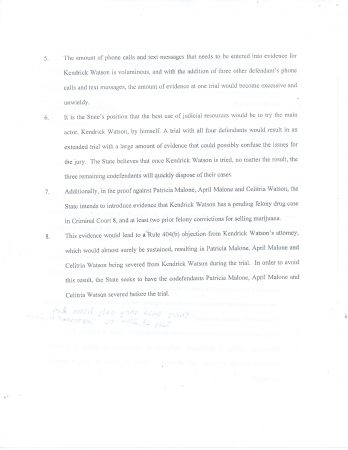 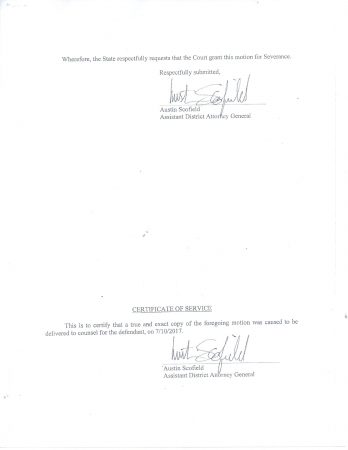 Affixed to the State’s Motion for Severance when we removed the documentation from its mailing envelope was a post-it note: 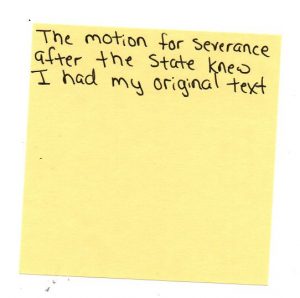 Ms. Watson said that key to her exoneration was an app she installed on her phone which automatically copies all of her text messages to her email account.  Through that tool, she said that she was able to show her attorney and, by extension, the prosecution, that her text messages had been altered to imply that she was a co-conspirator in the alleged plot to smuggle contraband into a penal facility.

I was arrested on January 31, 2017 while at work.  There were 15 co-defendants for a total of 16.  We were all charged with conspiracy to take controlled substances into a penal institution, money laundering, and conspiracy to money-launder.  I knew that I didn’t do anything, so I knew that anything I was going to get was going to be fabricated.   I knew only one person in the case, and that was my brother, Kendrick Watson.  I never met anyone; I never talked to Kendrick about drugs; I never took any drugs to Kendrick; we never had a discussion about it.

My brother already had a case in Shelby County, and he was locked up on a conspiracy charge with another 16 co-defendants.  He found fabricated evidence in that case, so he was fighting that case really hard, and it was about to be dismissed because the judge had said a bunch of things in court that he shouldn’t have said.  Right before they were about to dismiss it, they indicted us on a lie.

I asked my attorney for discovery and any other evidence to prove why I was on the case, and I never got anything.

“When you say they ‘made’ you, do you mean that the prosecutors encouraged you to contact the BOPR?” we asked, to which she responded:

Yes, they encouraged me; they sent me a letter that it was in my best interest if I added my attorney to the complaint.  He never gave me anything.  The only way I was able to get my information was from another attorney.  She gave my co-defendant my information by accident, thinking that I was her client.  She submitted my information to April Malone, who emailed me a month after I was arrested with the discovery and all of my evidence.

When I received my information, they didn’t know that I had my original text messages. I was just waiting to get the discovery to compare it to what the police were going to say.

I finally got the discovery they had on me, my brother, a young lady named April Malone; her mother, Patricia Malone, and another lady, Katrina Fulton-Jenkins.  I knew April from when I was young, but I had no dealings with her ever since then; the only thing we had in common was my brother, Kendrick Watson.

The other person, Katrina Fulton-Jenkins, who I also do not know, is like the main person, and they were trying to tie me to her.  So under my photo is her photo, saying that she and I were doing drug transactions.

My brother sent me a text message on August 14 (2016) and it said, “What it do, sis” and I sent him back a text message which said,  “Nun what up”.  When they got through altering the text message, they said I said, “Nun what upNun what upYea how’s your dayI just dropped that money to Ms Jay Ok”.  I never said that.

“Do you know who altered the text messages?” The Post & Email asked, to which Ms. Watson replied:

I’m not sure.  I think the prosecutor and the Memphis Police Department’s Organized Crime Unit (OCU) fabricated my texts: a detective, Thurman Richardson, and Jonathan Overly.  After I told my lawyer that I had my original text messages, that’s when they dropped the case against April Malone and me.

“Did they drop all the charges against April and you?”

“Completely.  But they were adamant about taking Kendrick to trial.”

“Why do they do this?  Why are they looking for people to arrest and imprison?”

I think that they do it because by the time they indict you — because they had been trying to get this indictment for years — you don’t have evidence.  I was the only one who had evidence to prove that I didn’t say it.   If I hadn’t had those, I might have had to take a plea deal.  They said I had drugs in my car; I had to pay thousands of dollars to get my car back; they took my car when I was at my job.  There are security cameras there, and I never had any drugs in my car.

They do it because people don’t have evidence, so it’s easy.  My brother was a target; he was the most hated person in Shelby County at the time.

“Is there a reason for that?”

They said he was “a bad guy.”  But even if he were, what does that have to do with me?  I didn’t have a traffic ticket at the time this happened, but they had put him and me in a physical relationship with me calling him “Baby” and things like that in the text messages.  I had to bring paperwork and our birth certificates to show that I would never talk to him in that way.

“Who was the lead prosecutor on this?”

Ms. Watson’s first letter to the BOPR was included in the documentation she sent to us and reads: 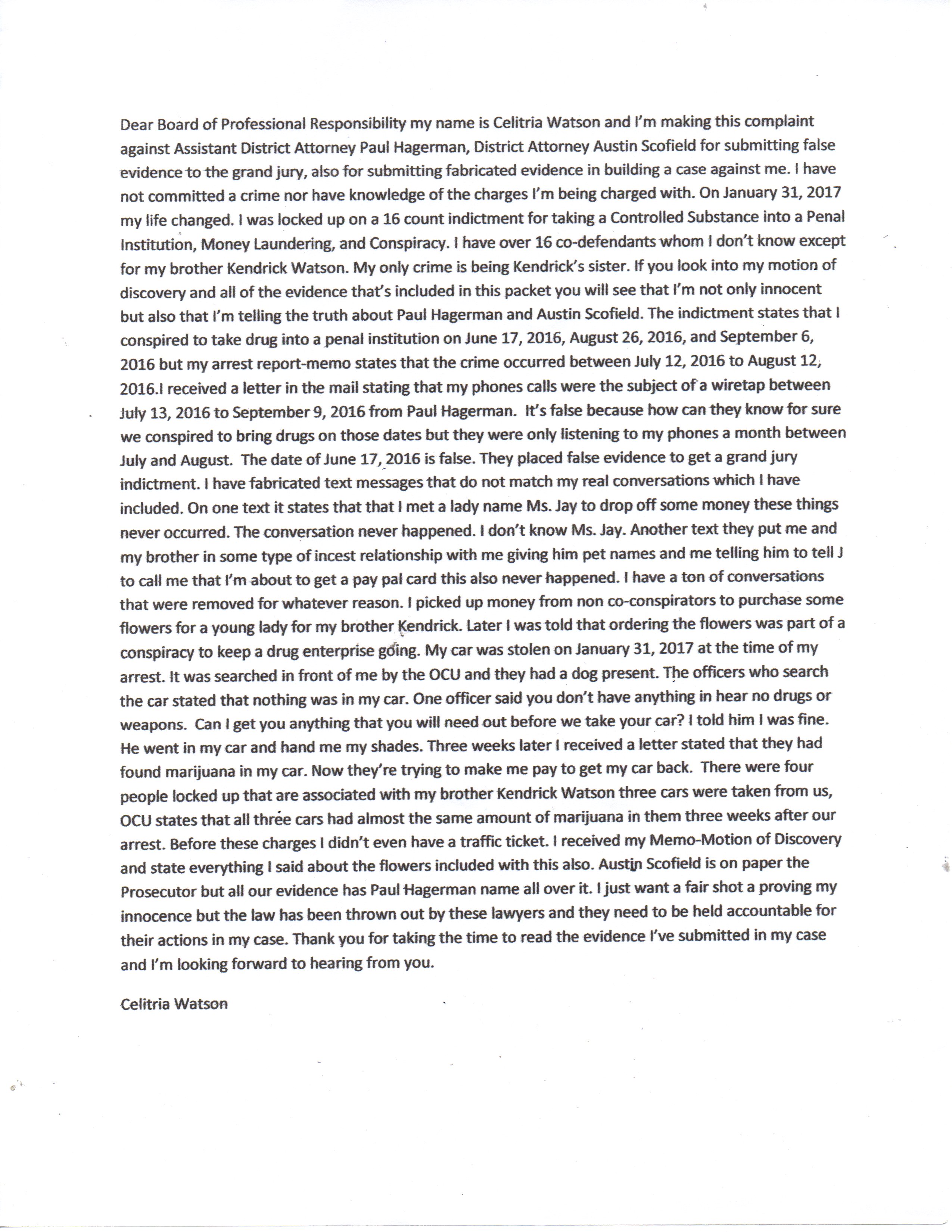 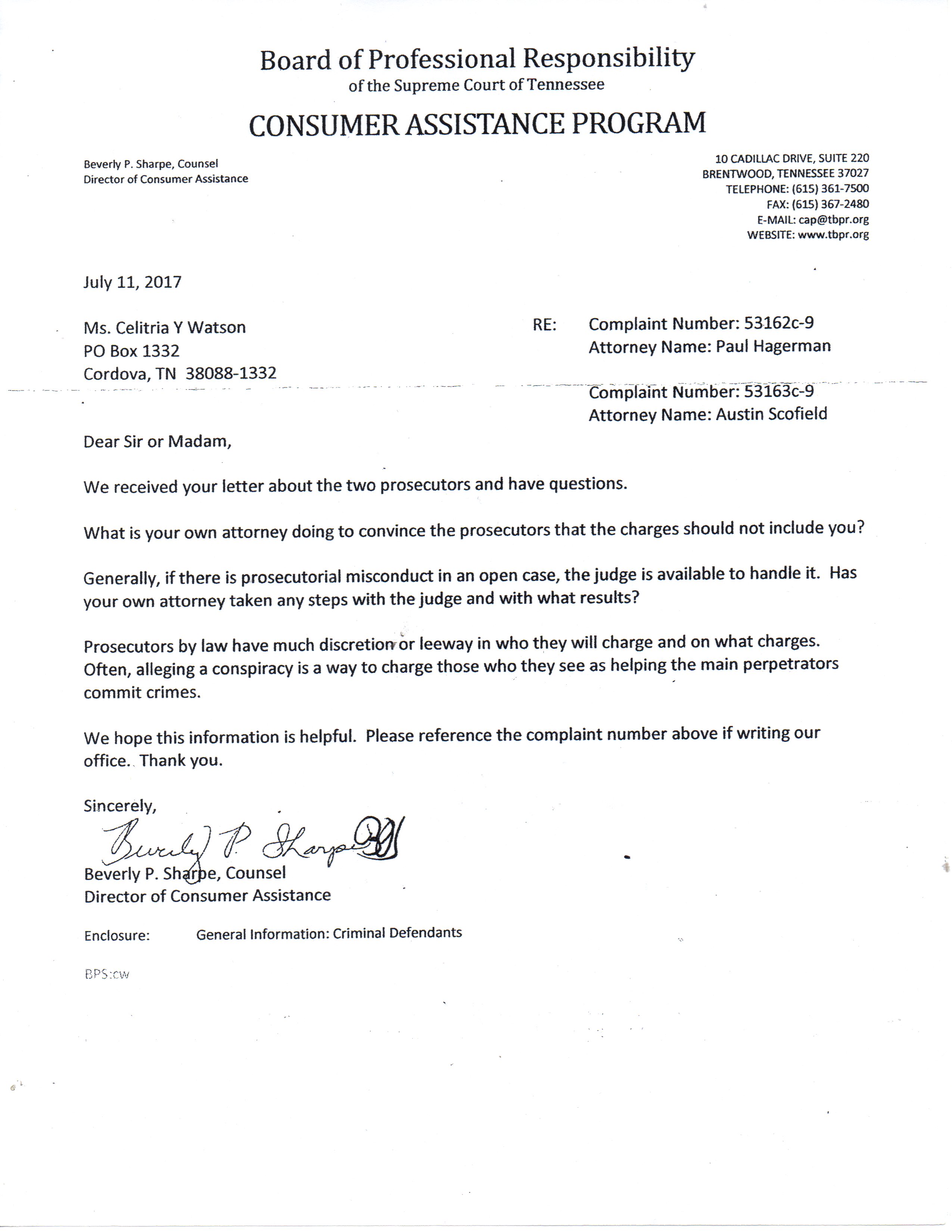 On November 11, The Post & Email interviewed April Malone and will be publishing her narrative in a follow-on article.  We will continue to report on this case in future installments.