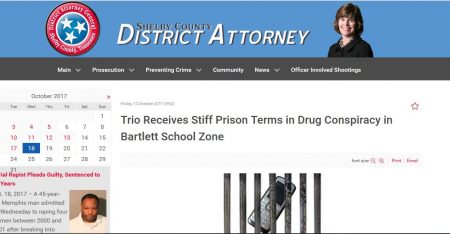 (Oct. 18, 2017) — As part of our follow-up on a case arising in Shelby County, TN in which three people have been sentenced to lengthy prison terms for allegedly participating in a drug operation, The Post & Email made several calls to the Shelby County District Attorney General‘s office and the Bartlett Police Department (BPD) on Monday and Tuesday, thus far without result.

Shelby County comprises Tennessee’s 30th Judicial District and the City of Memphis, which is reported to have one of the highest crime rates in the nation.

On February 3, 2016, the BPD arrested Kristina Cole for allegedly participating in a conspiracy to distribute methamphetamine on the basis that she allegedly contacted TDOC inmate Jason Lamar White by telephone to advise him that a package containing the drug had “arrived” after retrieving it from her front porch that afternoon.

However, as Fox13 reported on Friday, TDOC inmate Montez Mullins confessed to setting up the delivery and that neither Cole nor White was involved.  The Post & Email was told prior to the publication of Fox13’s report by White’s mother, Kimberly White, that Mullins admitted to orchestrating the operation from prison in a statement made to Cole’s then-attorney over the summer.

Mullins’s recorded confession was played at the trial, which took place in July simultaneously for all three defendants.  “Mullins never took the stand and therefore no one could cross examine him,” White told us. “To play a confession without the other defendants having the right to cross-examine Mullins in a joint trial was prosecutional misconduct, but none of the attorneys objected to this out-of-court confession being played without Mullins taking the stand.”

Article I, Section 9 of the Tennessee constitution states:

Section 9. That in all criminal prosecutions, the accused hath the right to be heard by himself and his counsel; to demand the nature and cause of the accusation against him, and to have a copy thereof, to meet the witnesses face to face, to have compulsory process for obtaining witnesses in his favor, and in prosecutions by indictment or presentment, a speedy public trial, by an impartial jury of the county in which the crime shall have been committed, and shall not be compelled to give evidence against himself.

Regarding a cell phone which Jason White allegedly used to conduct the operation, Kimberly White told us, “The TDOC employee that testified to Jason having a phone never stated that he had a phone but that he saw Jason flush a phone. However, no evidence was presented during the trial. In fact, it was brought up in court that there are three ways to cut the water off if the prison is trying to catch something up or keep anything from being flushed. The prison took no precautions to turn the water off to try to keep a phone from being flushed. You would think with this case, the amount of drugs and the evidence they say they have on Jason, the prison would have taken those precautions.”

White, 36, is serving the last year of a 21-year sentence for participating in a burglary as a youth and has now been sentenced to an additional 60 years in prison without the possibility of parole.

As was reported by local media in July, Shelby County District Attorney General Amy Weirich was found in a Harvard study covering the years 2010-2015 to be the most frequently overturned among prosecutors in the four states of Tennessee, Louisiana, Missouri and California.  The Fair Punishment Project’s report begins:

Prosecutors wield extraordinary power in the criminal legal system. How they exercise their power can be the difference between fairness and inequality, justice and corruption, and a community with faith in its justice system or one that feels betrayed by it. Newspapers across the country have featured elected prosecutors and their offices where there have been failures to use this authority ethically, and in many cases, where prosecutors have engaged in illegal behavior in order to win convictions.[1] In New Orleans, elected District Attorney Leon Cannizzaro issued fake subpoenas, repeatedly hid evidence showing that his office had made deals with informant witnesses, and failed to turn over crucial materials to defense lawyers in a timely manner—jeopardizing convictions, public safety, and the trust of voters. In Orange County, California, elected District Attorney Tony Rackauckas has led an office embroiled in scandals involving a secret jailhouse informant program, the suppression of evidence, and falsified testimony. Earlier this year in Memphis, Shelby County District Attorney Amy Weirich faced formal disciplinary proceedings after the Tennessee Supreme Court concluded that she withheld key evidence from the defense in a murder trial and made improper arguments during her closing statement. This kind of misconduct has devastating results on people’s lives.

The study also found that Weirich garnered first place for professional misconduct out of Tennessee’s 95 counties.  In March, Weirich received a private reprimand from the state supreme court for courtroom and other misconduct arising from a high-profile case which sent a young woman, Noura Jackson, to prison for 11 years.

Jackson’s story reported in detail by The New York Times in August.

A press release issued by Weirich’s office on Friday alleges that White ran the drug operation with a contraband cell phone while at the Riverbend Maximum Security Institution and advocates for passage of a law making it a crime for an inmate to possess a phone while in prison.

The Fox13 article, published the same day as the DAG’s news release without a byline and bearing very similar wording, states that a single person identified as White operated the drug conspiracy even though the definition of a “conspiracy” is that more than one person is involved.

Also on Friday, The Commercial Appeal reported that a Tennessee appellate court reversed the conviction of a man from another county whose case had been tangentially impacted by Weirich’s office and the Memphis Police Department.

The DAG’s press release did not divulge that Mullins was already in prison for conviction on previous crimes and confessed to running the operation.  However, Fox 13 indicated that Weirich’s office was aware of Mullins’s confession.  “According to the DA’s Office, Mullins said Cole and White knew nothing about the drug delivery. He claimed a Hispanic man he met in prison gave him the address as a ‘good’ place to deliver drugs in the Memphis area,” Fox13 reported.

A message left on Monday with the DA’s “media” office about the case received no response on Monday, Tuesday. or Wednesday.

The box was addressed to “2552 Jenwood Street, Memphis, TN 38134,” according to a probable cause affidavit provided by BPD Det. Mark Gaia (page 5 of 16 of discovery documents).  In the affidavit, Gaia stated that a California detective rerouted the package to the Bartlett Police Department after determining that it contained methamphetamine.  Gaia stated that the BPD then conducted a “controlled delivery” of the box to Cole’s residence.

However, an initial shipping label affixed to the box shows that it was addressed to “2552 Linwood Road, Bartlett, TN 38134” (page 7), which was not Cole’s address.  Kimberly White told us that the Linwood Road address “doesn’t exist.”

Phone records show that text messages sent from Cole’s phone declaring to the other party that the package had “arrived” were sent after Cole was booked in to the Bartlett Police Department on the evening of February 3, 2016.

Eyewitnesses at the trial have said that Gaia admitted on the stand to having sent the texts. Nevertheless, Cole was sentenced to 13 1/2 years in prison and no wrongdoing noted on Gaia’s part by the court.

On Tuesday afternoon, Gaia declined to speak with this writer about the case and referred us to the BPD’s Public Information Officer (PIO).

The receptionist who answered the phone at the DA’s office agreed to connect us with Scruggs.  However, after the transfer, we received a recording which said we had been connected to an extension where the “voice mailbox was not set up yet.” Our options were to disconnect or dial another number, and we disconnected.

We then called the Bartlett Police Department at 901-385-5555 and asked to speak with Detective Mark Gaia.  We were transferred to him, but he declined to speak with us, referring us to the Public Information Officer (PIO).  He said he would transfer us, the but call was disconnected instead.

We then called back the BPD and asked for the PIO.  The receptionist gave us the number “901-385-5502.”  When we called that number, a female officer answered by identifying a particular “patrol unit.”  When we told her we were given that number to reach the PIO, she impatiently told us to call “5510.”

At 2:19 p.m. EDT, we called 901-385-5510 and were connected to a recording which said that we had reached a “substation.”  While the recording said there was an option to leave a message, it further stated that “the office is closed for lunch and should reopen within the hour.”  Our call was then disconnected.

At 2:30 p.m., we decided to try the DA’s office again.  After explaining to the receptionist that the previous transfer  led to a voice mailbox which did not take messages, she offered to reconnect us to Scruggs’ office or provide his email address.  We chose the latter option.

Four minutes later, we called the BPD again and spoke with Debbie, asking this time for Capt. Page.  Debbie obviously recognized our voice and asked what we were seeking.  When we said we wished to obtain information about a case, she said that we needed to speak with an Officer “Tina Shauber,” with whom she then connected us.

Shauber answered the phone, but when we told her that we were seeking documentation about the Cole/White/Mullins case, she said that because it was “bound over to the grand jury” and handled by the “criminal court downtown,” her office possesses no documentation of it.

At 9:38 a.m. EDT on Wednesday, The Post & Email sent the following message to Scruggs:

Good morning, I am looking into the above-referenced case in which three individuals were recently sentenced to lengthy prison terms on what has been described to me and demonstrated by documentation as faulty evidence.

Is your office able to explain why the package received by Cole was originally addressed to “2552 Linwood” rather than “2552 Jenwood,” the latter of which is Cole’s address?

Given the two addresses, why did the Bartlett Police Department conduct a “controlled delivery” of the box to Cole’s residence?

My understanding is that the cell phone allegedly used by Jason Lamar White at the Riverbend Maximum Security Institution was not introduced into evidence at the trial. What proof was offered that, in fact, White had a cell phone?

Fox 13 reports that Montez Mullins confessed to orchestrating the box’s shipment from California without the knowledge or involvement of White and Cole. Why, then, were the other two convicted?

www.fox13memphis.com/top-stories/man-ran-drug-operation-near-local-elementary-school-from-nashville-prison/624236202
I am also told that BPD Det. Mark Gaia “confessed” to using Cole’s telephone to send text messages after Cole was taken into custody by the BPD on February 3, 2016. The phone records are included in the discovery package and confirm that the texts were sent after Cole’s booking.

http://www.thepostemail.com/wp-content/uploads/2017/10/Jason-and-Kristina-Case-Info188.pdf
Where, when and at what cost may I obtain a copy of the trial transcript?

At 10:24 a.m. EDT, The Post & Email received the following response from Scruggs:

Received this from the blogger. First, how did she get my email. Second, I don’t intend to respond at all.