THROUGH “ILLEGAL” WIRETAPPING AND JUDICIAL INTERFERENCE 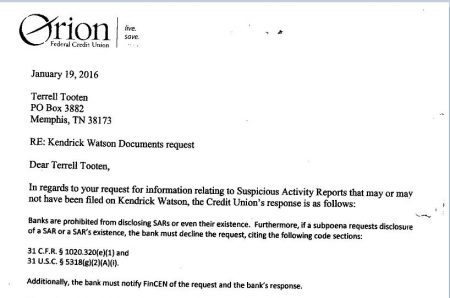 (Apr. 23, 2018) — On March 23, 2018, a federal lawsuit was filed in the U.S. District Court for the Western District of Tennessee by two falsely-accused women in a case arising early last year in Shelby County, TN.

The six are accused of having violated state and federal laws in causing the “false arrest,” “false imprisonment,” and other alleged civil-rights violations of Celitria Watson and April Malone.  Both were caught up in a dragnet of 16 individuals accused of narcotics dealing but later removed from the action.

Celitria Watson was able to prove that text messages used to incriminate her were altered by as-yet unidentified parties, and, after her attorney shared the documentation with Malone’s attorney, both were quickly dropped from the defendant list on a weak pretext.

Malone’s mother, Patricia Malone, was the third defendant quietly removed from the case last summer, although she is not a party to the federal lawsuit.

However, Celitria’s brother and April’s boyfriend, Kendrick Watson, is now in prison after accepting a plea deal in that case and a previous one, serving a 23-year combined sentence.

Shelby County is designated as Tennessee’s 30th Judicial District, where Amy Weirich is chief prosecutor, elected by the people to a full eight-year term in 2014 after filling a 2011 gubernatorial appointment to fill a vacancy.  Weirich has been accused in a number of instances of violating defendants’ civil and constitutional rights, most famously in the Noura Jackson case which sent a young woman to prison for nearly ten years while the prosecution withheld exculpatory evidence.

In March 2017, Weirich received a “private reprimand” from the Tennessee Supreme Court in connection with the Jackson case.

In a Harvard Law School study whose results were made public last July, Weirich was found to have committed the highest number of “ethical violations” among prosecutors in the states of Tennessee, Louisiana, California and Missouri.

Kendrick Dejuan Watson is currently an inmate at the Morgan County Correctional Complex (MCCX) in Wartburg and has filed his own civil complaint under 42 U.S.C. § 1983 naming Overly, Acred, Hagerman, a previous defense attorney, and 30th Judicial District Judge Lee V. Coffee as defendants.  Below is an order signed last August by U.S. District Court Judge S. Thomas Anderson in that case. 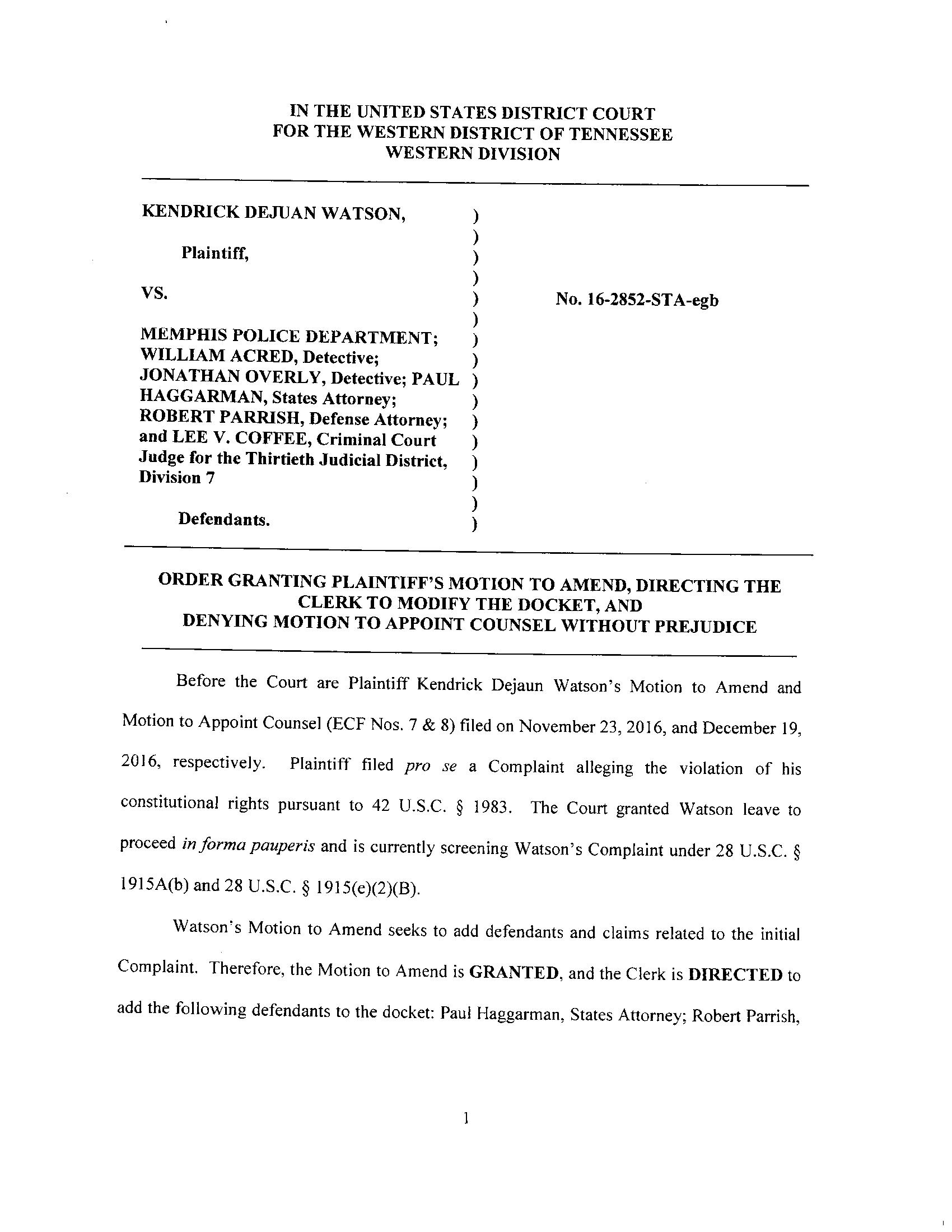 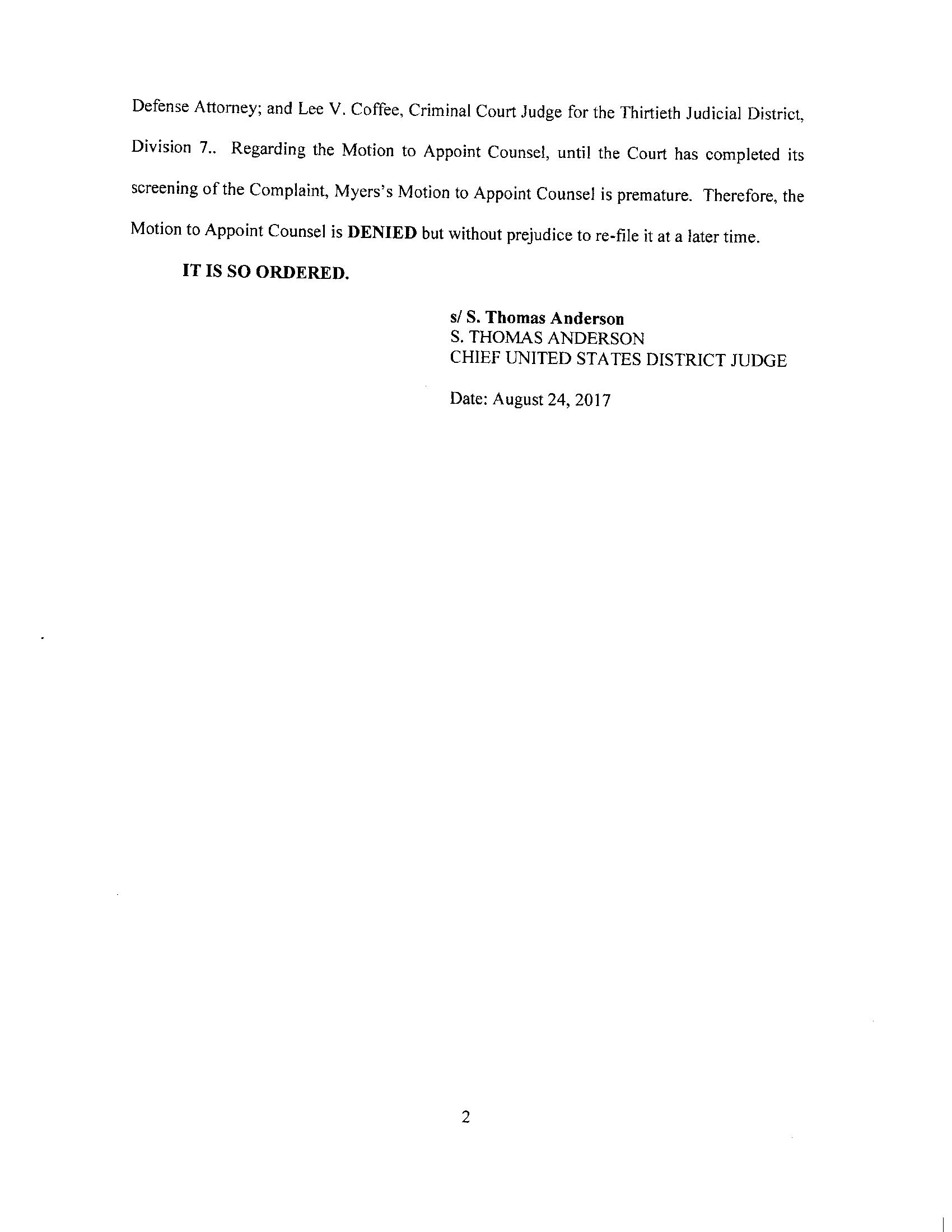 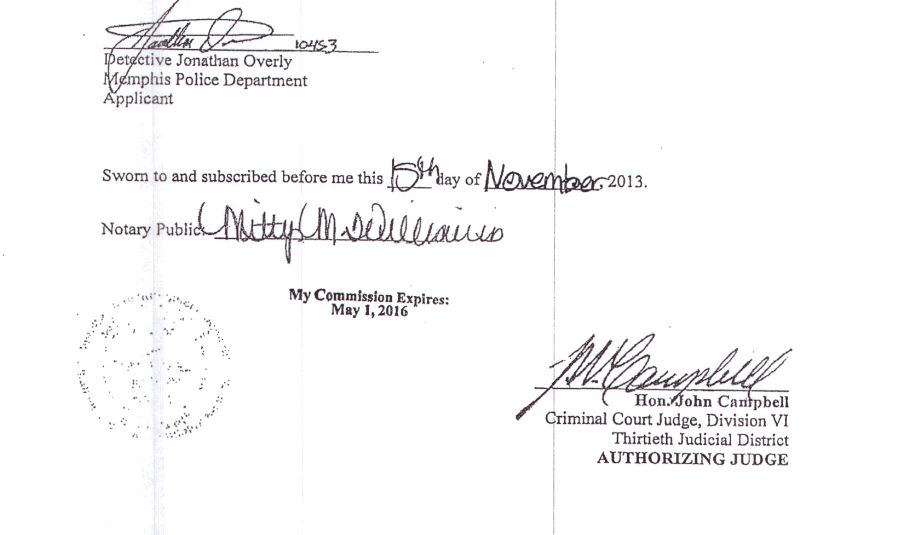 Included in our article announcing the federal lawsuit is a letter from Kendrick Watson accusing Coffee of having knowingly permitted false evidence to be used against him.  “…not only was Judge Coffey fully aware of the fact that my rights had been violated but he personally involved himself and got his hands dirty by allowing one of the detectives I was accusing of fraudulent conduct to work on a second case against me and my family we are in that case evidence was fabricated again with false text messages…” Mr. Watson wrote last month.

“His case is from the same poisonous fruit,” Celitria Watson told us. “They can’t say that they just did it to us; they did it to him, too…If someone actually took a look at Kendrick’s evidence — what they actually used to get the wiretaps, the bogus SAR form — it would probably be dismissed.  His case was headed for dismissal and then they indicted us right before his case was to be dismissed.  I don’t think it even would have made it to a jury; I think the judge would have had to dismiss it.”

“Our cases are really like one and the same,” April Malone told us.

Celitria’s reference was to the “Suspicious Activity Report Summary” (SAR) allegedly produced by the Orion Federal Credit Union to the Memphis Police Department, which was used to demonstrate that Kendrick Watson made large cash deposits which the credit union allegedly said it “felt” to be “suspicious.”  However, a letter to Kendrick Watson’s then-Attorney on January 19, 2016 from the credit union stated that even with a subpoena, neither SARs nor “even their existence” can be divulged to any requester on the basis of two federal statutes. 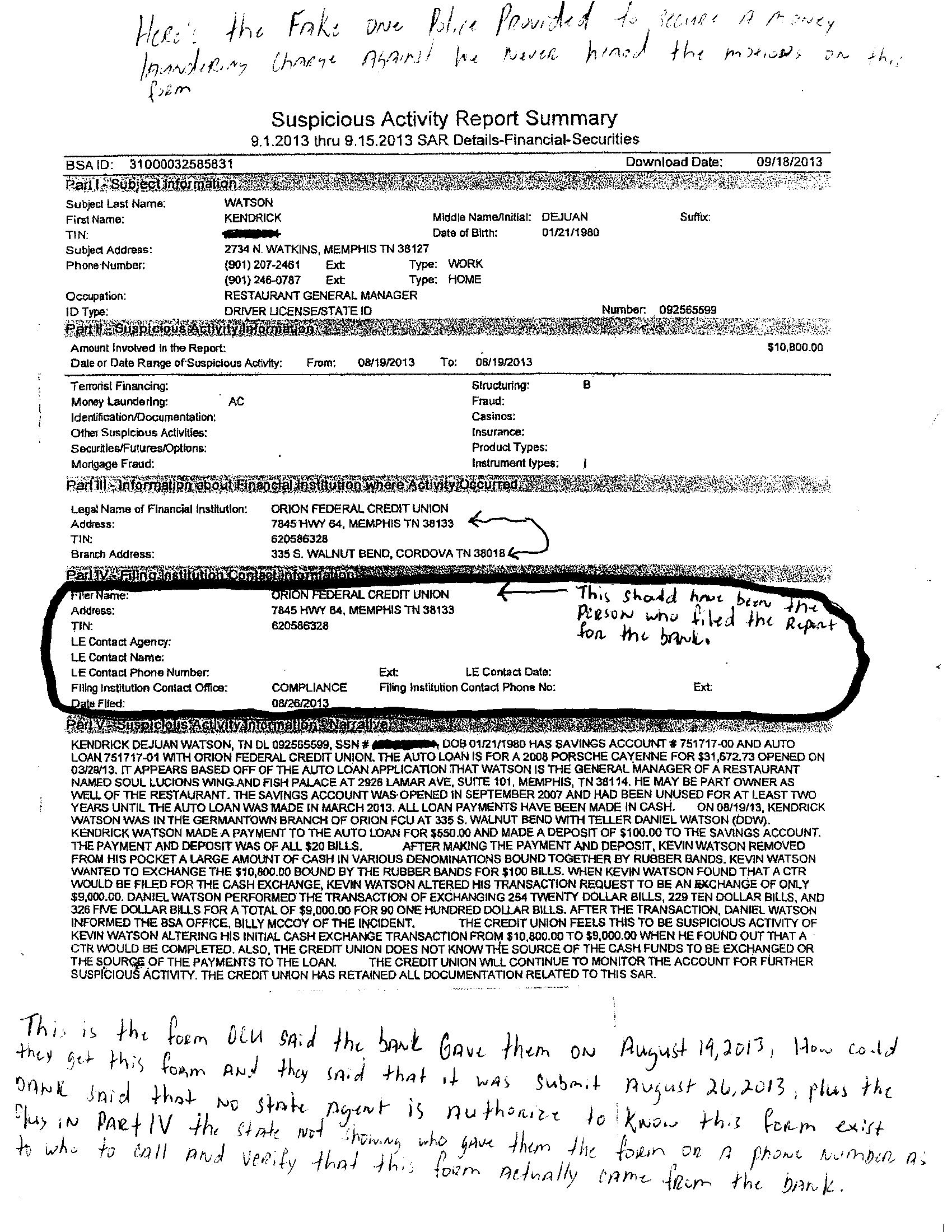 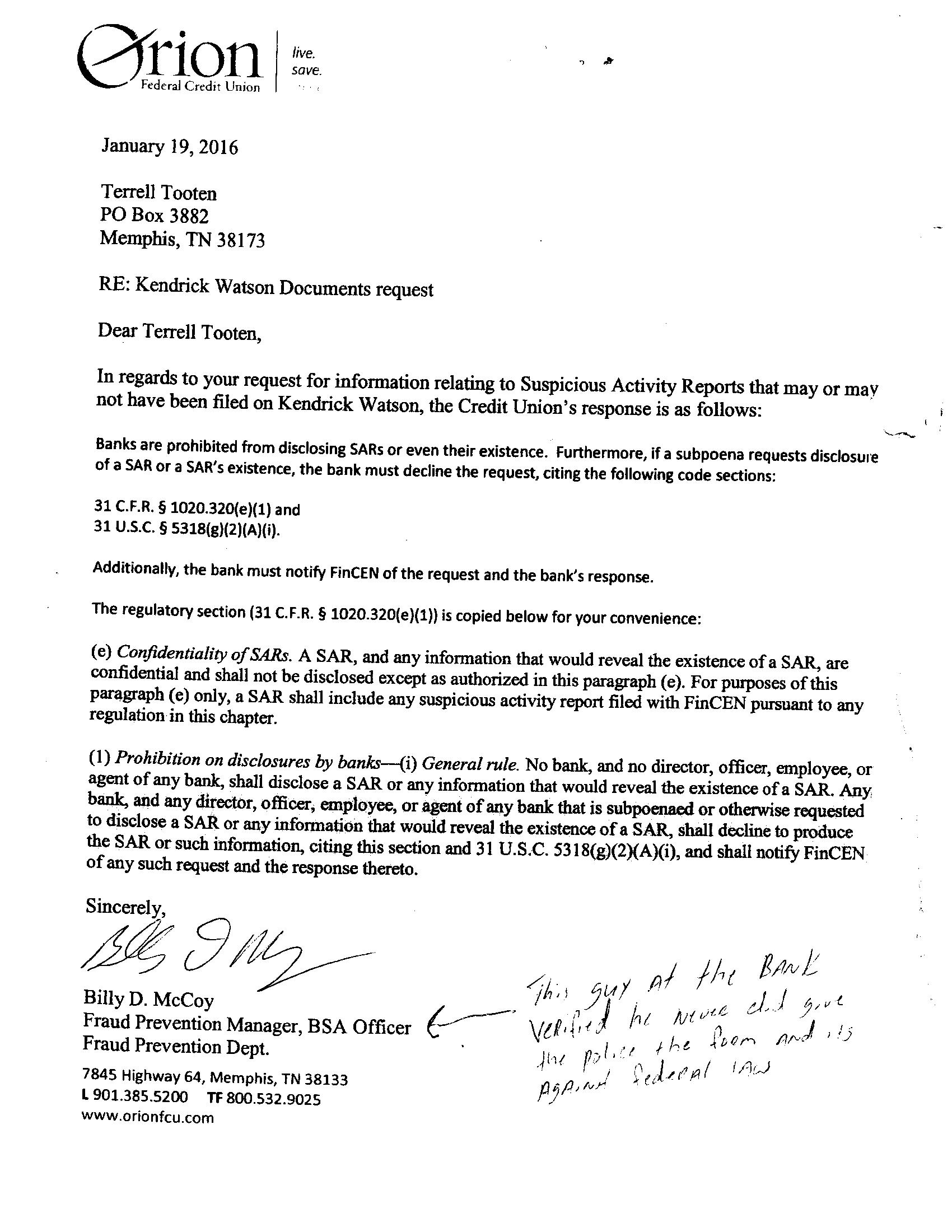 As a result, Kendrick Watson claims that the “SAR” is “fake” amid questioning why the credit union allegedly contacted “not just any state police but the exact same detectives thats been investigating me.” [sic]

He additionally termed the wiretaps on his phone “illegal” and said that Coffee, who was a Shelby County deputy prosecutor before becoming a judge, “took the case over and started acting as the prosecutor trying to force me into trial without allowing me to hear my motion to dismiss or motion to suppress evidence…” 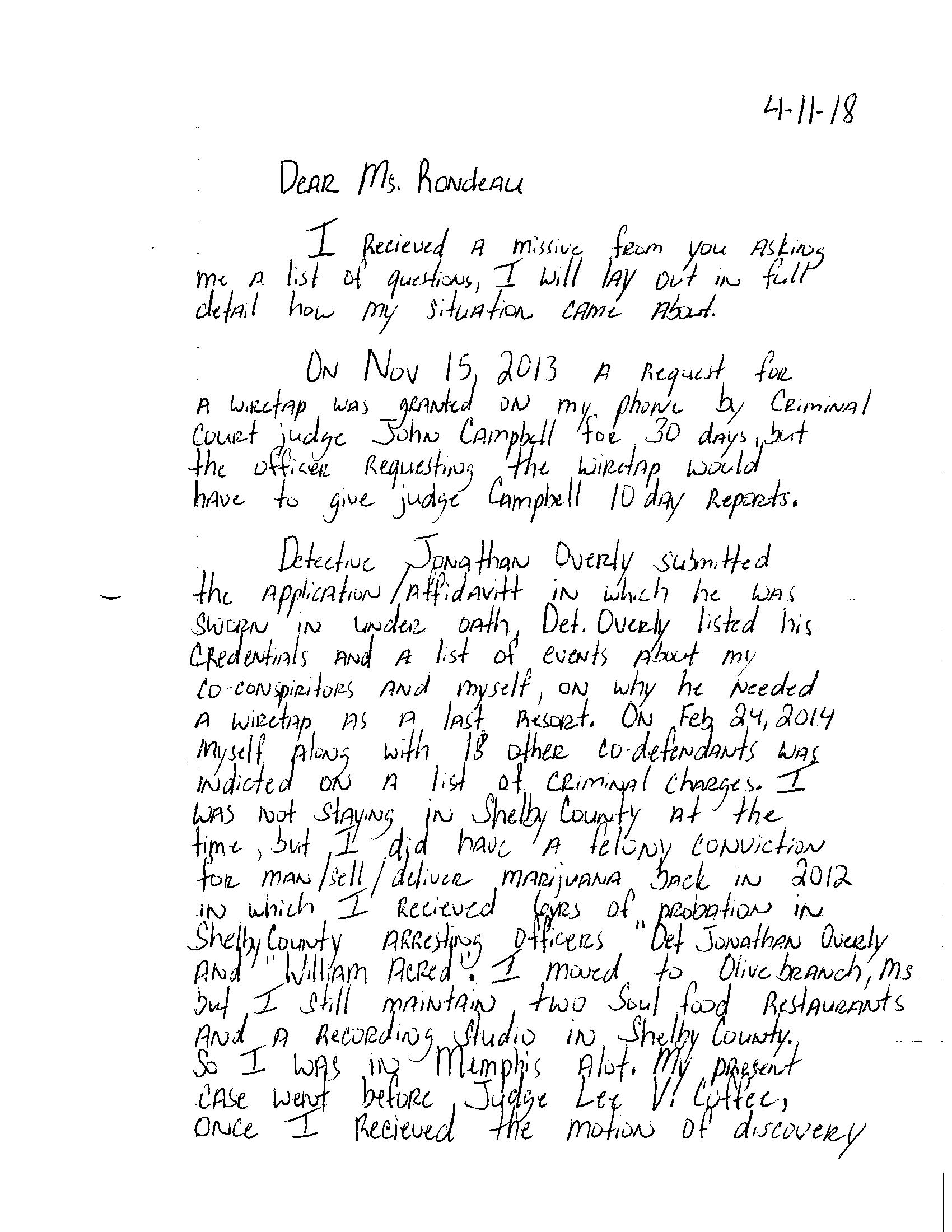 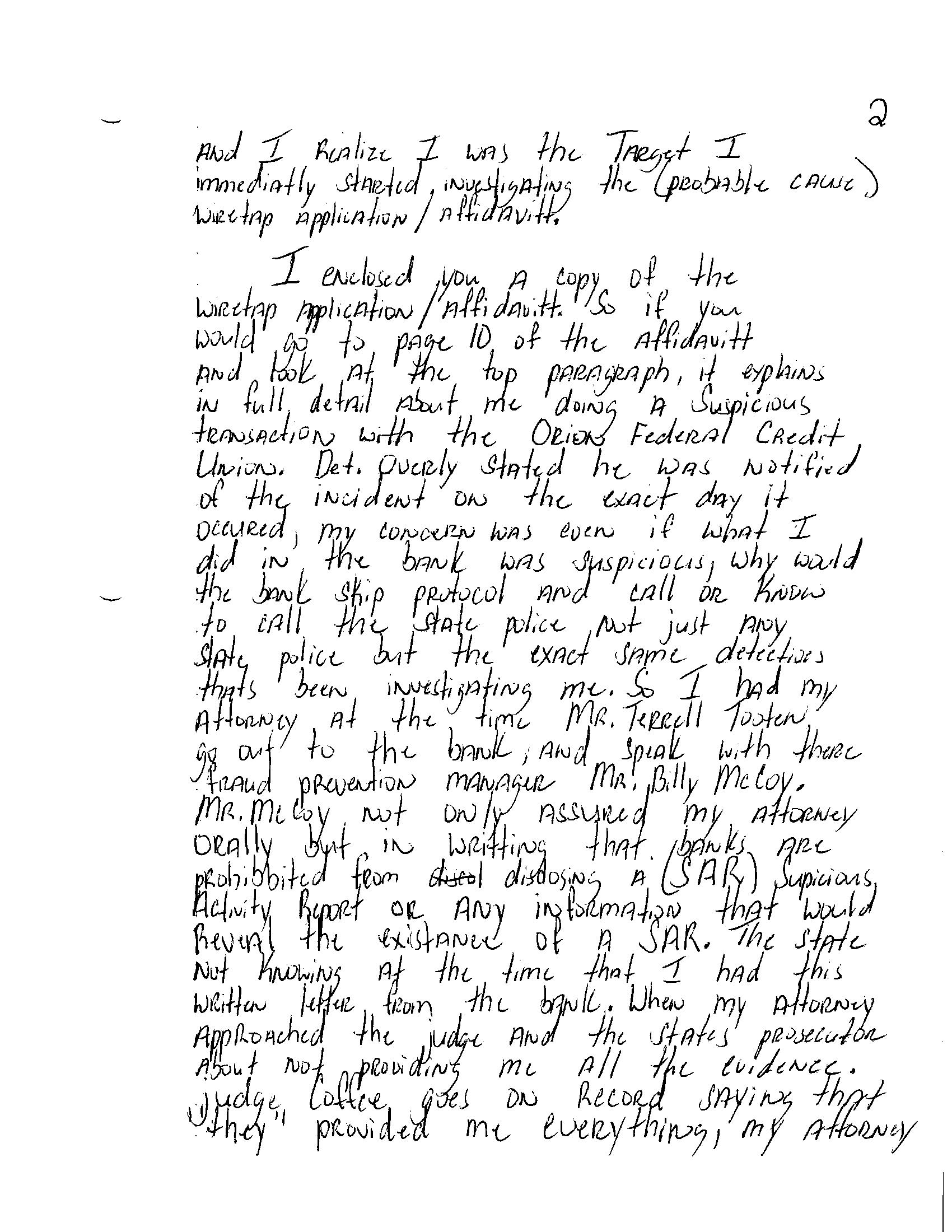 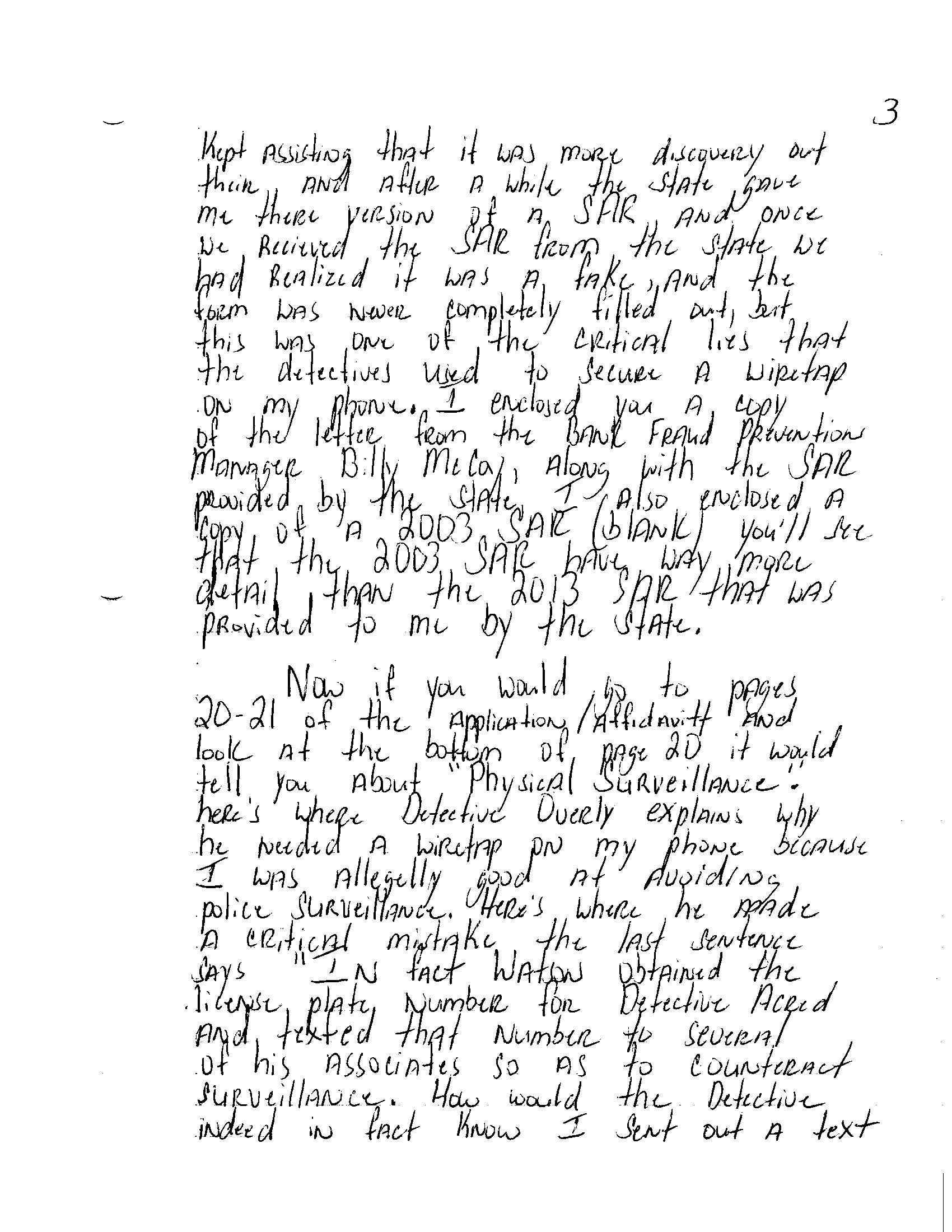 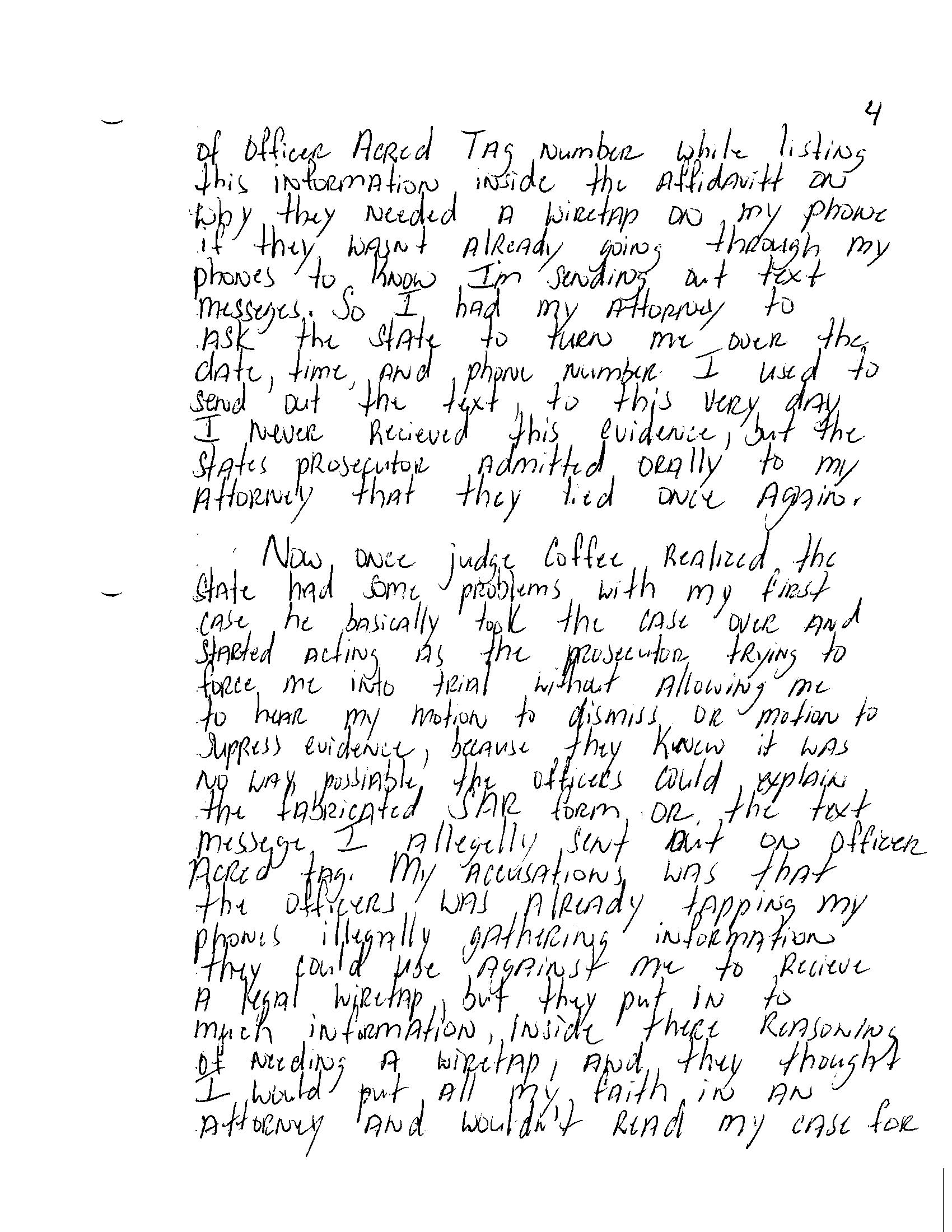 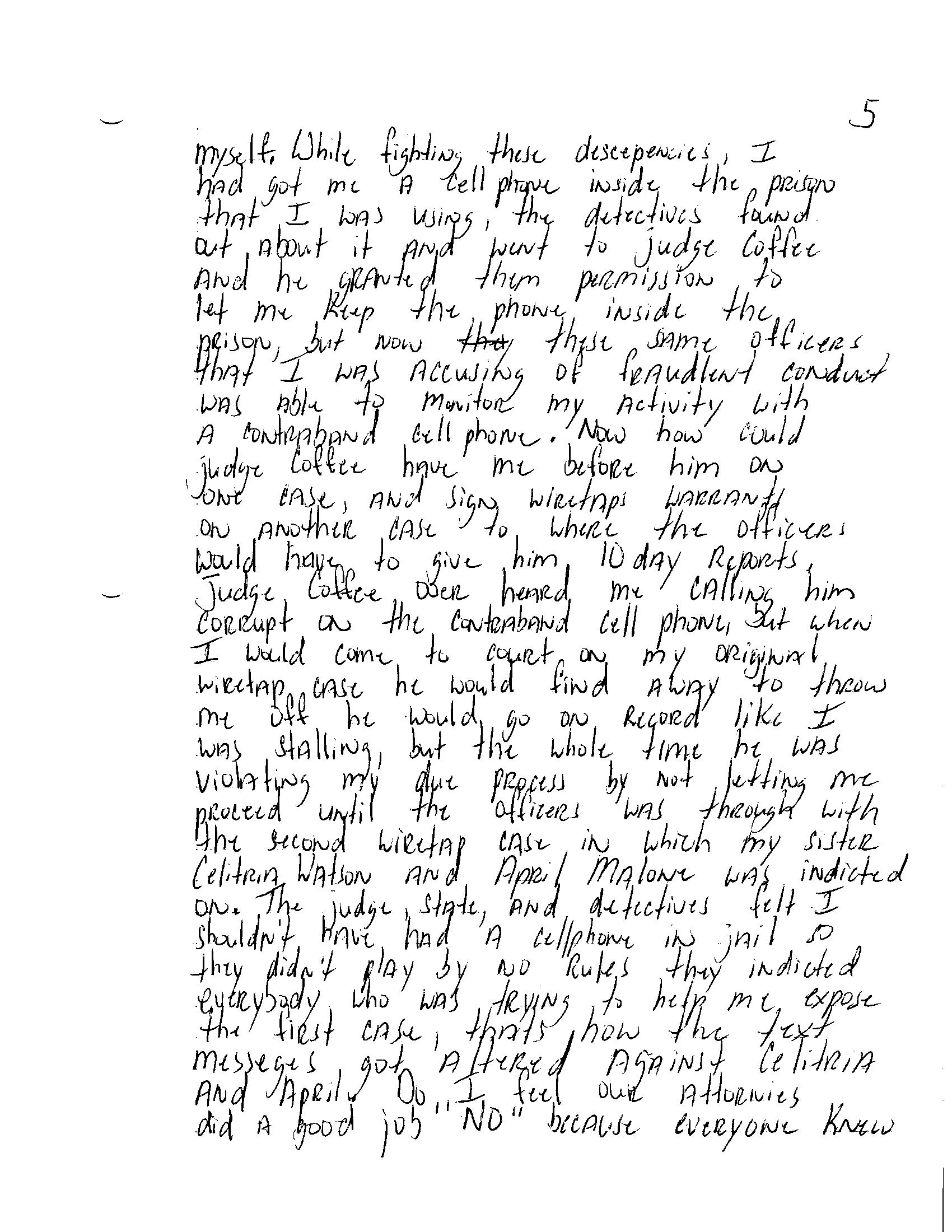 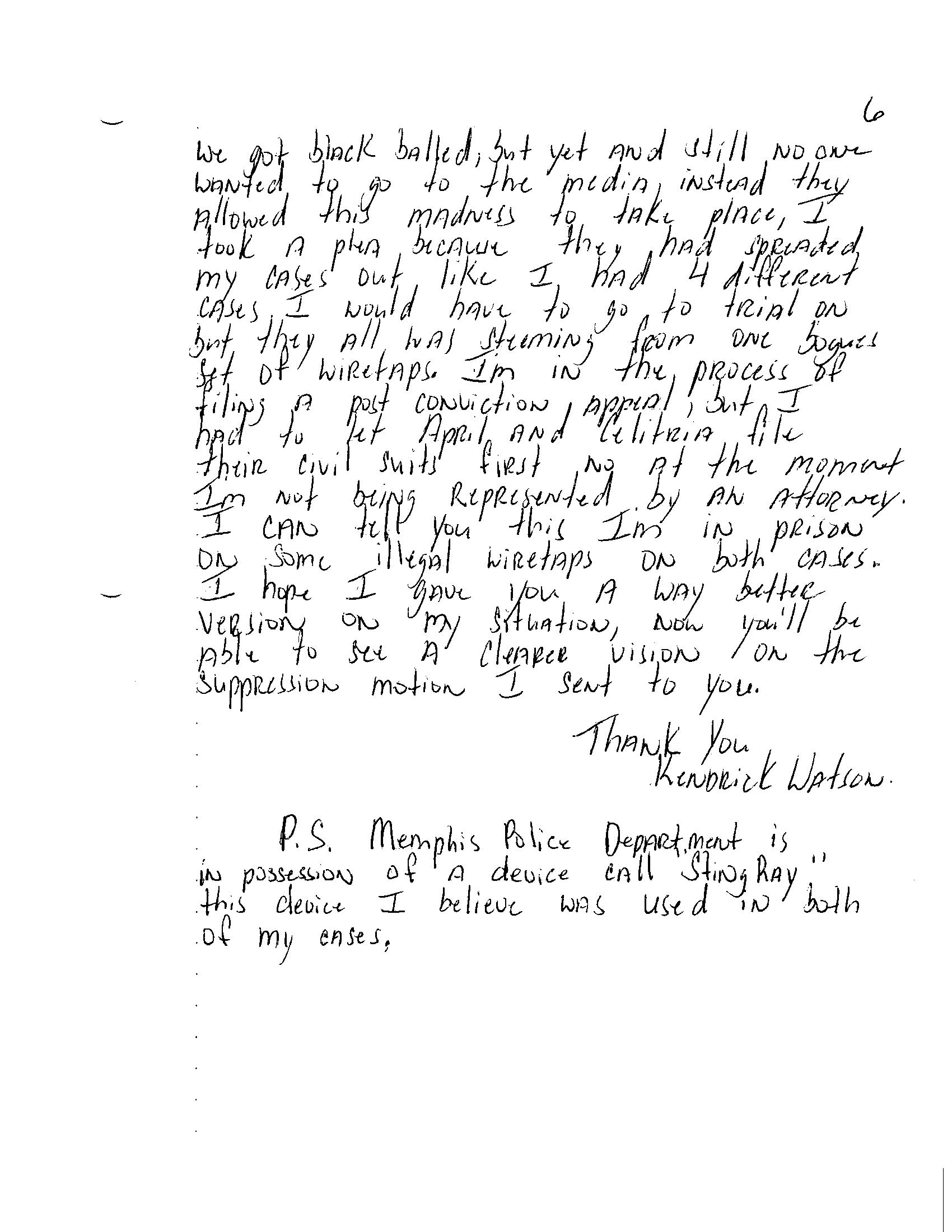 In more than two dozen letters received by this publication between September 2016 and November 2017, allegations of police malfeasance, prosecutorial misconduct and judicial overreach were related in addition to reports from Northwest Correctional Complex (NWCX) inmate Jerome L. Johnson, whose case originated there.

Late last year, we were also made aware of accusations lodged against TDOC inmate Jason Lamar White and an acquaintance, Kristina Cole, based on evidence shown to have undergone tampering. In that case, neither the prosecutor’s office nor the Bartlett Police Department would speak with us regarding any of the details.

White was sentenced to an additional 60 years in prison, while Cole received 12 1/2 years for a crime in which the evidence shows she did not participate. Additionally, a confession from another TDOC inmate to having arranged the drug shipment in question appeared to have no bearing on the prosecution of the other two defendants.