The Shakedown Industry’s Shot in the Arm (RR)

“NOTHING DIGNIFIED ABOUT IT” 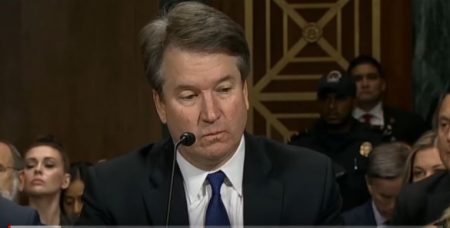 (Oct. 4, 2018) — “Good evening, ladies and gentlemen, and welcome to the show that only tells the truth: ‘The Pulse of the Nation.’ Hello, my name is Roving, as in Roving Reporter (RR), and I’ll be your host for this viewing*, which, as our longtime viewers can see, is taking place in Professor Zorkophsky’s office here at the university. And speaking of the good professor…”

“Yes, of course, I should’ve seen that coming. ‘Zork’ it shall be. We’re here today to hawk your new book, ‘The Pit and the Payoff.’ I haven’t read it; heck, I haven’t even seen a copy. Oh, thank you. $19.95? Maybe later. I see that a flash drive is included; mind explaining?”

“Not at all. First, I want to thank you and your crew for responding to my request that you interview me to push my new book, ‘The Pit and the Payoff.’ The flash drive has all the shots of Judge Brett Kavanaugh on TV, plus the Senate hearings with the Democrat saboteur, Christine Blasey Ford.”

“Care to do a quick synopsis of it?”

“Not at all; after all, that’s why we’re here. This Ford allegation against Kavanaugh is very troubling, this I can tell you.”

“That’s it? How about expanding on that theme just a little bit more?”

“Oh, yes; for sure. Sorry; I was just daydreaming. Blame it on old age, I suppose.”

“What were you thinking of just then?”

“I was thinking of the repercussions many can suffer because of just one person. Now I’m not saying that we can or even should put all the blame on that Christine Blasey Ford character; heck, it could’ve been a hundred-and-one other people that the Democrats chose to articulate allegations against Kavanaugh, but what I am saying that it was this Ford person, okay?”

“Equally sleazy is this Senator Dianne Feinstein AND all the other characters, Democrat and Republican alike, for letting her totally-unfounded allegations come forward. What should’ve been done is to not accept one teeny-tiny little word of Ford’s allegation, especially since she had absolutely no corroborating evidence; none whatsoever: ONE BIG FAT ZERO. NEVER should have seen the light of day; never should have been made public.”

“Look, south of the border there’s this very lucrative industry known as the ‘Professional Abduction Business’; you following me?”

“Yes, of course: south of the border they kidnap people for ransom.”

“Yes, and it was, at least in the beginning, the cost of doing business; in other words, it was an accepted part of being rich. Someone in the family was taken and a ransom was demanded, a reasonable one, by the way, where the abductee was treated with kindness and respect; never mistreated or abused in any way for, who knows, maybe it was a future kidnap victim they were holding, a form of an annuity, if you will.”

“Okay, they were treated fairly.”

“This is true: they were afforded free medical and dental and fed well and had bottled water, at least in the beginning. That’s when the lowlifes got involved because they saw how lucrative the return was, but what they failed to understand was if you don’t treat people with respect and compassion of their plight; if you beat them; if you rape them; and if you kill them, it destroys the whole Professional Abduction Business.”

“So, what happened? They get the payoff and kill the abductee anyway?”

“Yes, or if they didn’t outright kill them they would severely beat them, no matter how much ransom was paid. It’s to the point now that when someone is abducted they’re written off immediately as dead already. You see, where once honor lived it lives no longer: the greedy ones killed the Golden Goose.”

“But the kidnappings continue.”

“So what’s this has to do with Kavanaugh?”

“Everything. Listen: let’s say you’re rich; let’s say you got a little money, maybe upper middle class. So your son goes to the prom and the next day you get a letter stating, ‘Your son took my daughter to the prom the other night. Afterwards he attempted to rape her. Please deposit $10,000 in my bank account or else my daughter will be at the police station a week from today accusing your son of an unwanted sexual advance.’”

“That doesn’t sound good. So why not just take the note to the police and say it’s a frame?”

“Because the note was typed on a typewriter or on a computer in the town’s public library, that’s why. Who knows who wrote it, and you can’t prove you didn’t. You see, an allegation without proof is completely worthless, but this Ford character changed all of that.”

“What if Kavanaugh is promoted to the Supreme Court?”

“Well, that’ll help and help a lot, but I’m afraid the Horn of Plenty, the Cornucopia of shakedowns has already been released.”

“But what about the 9th Commandment? One of our longtime viewers, Rattlerjake, pointed that out to us the other day.”

“Yes, Thou Shalt Not Bear False Witness was completely overlooked by the heathens in our Congress, now, wasn’t it? There was no party, no beer, no rape, no Brett, no nothing: it’s been one big fat lie to make sure that a follower of the Constitution does not become a Supreme Court Justice, that’s all it is and that’s all it’s ever been. This Ford character lied about the whole thing, and that’s the truth. As a matter of fact, that’s the only truth there is in this whole tragedy, and there’s NOTHING dignified about it. What we have are a lot of stupid people making fools of themselves by hurting an innocent man and his family in the process. Ignoring the Bible has cost our country dearly, in more ways that we can foretell. ”

“So we’ve become a land of heathens under the umbrella of political correctness?”

“Yes, maybe. But getting Kavanaugh on the Supreme Court may just alleviate that tremendously, we hope.”

“We sure do, Zork. Well, good luck on your new book, ‘The Pit and the Payoff’; I’m sure it’ll be another bestseller. And I’m afraid our time is up and so, on behalf of the crew, thanks for watching and we hope you all have a goodnight: Goodnight.

[*Viewing: What we do is, usually, hang out on the corner in one of the suburbs of our big city and conduct on-the-street interviews on people about to catch the commuter train and ask them a few questions, mainly their most pressing concern of the day. After the morning rush hour is over, we go to a burger joint to wind down and talk about how it all went, such as recording characteristics (once we recorded near the zoo and picked up disgusting elephant noises), camera lighting and angles, background shots, and the overall “tone” of the show. After the burgers — which is our lunch since we have to be at the studio at 5:00 am and already had our breakfast — we go back to the station and edit what we shot, and that’s the product many of you see on TV that same evening. For those of you who don’t get us on cable, our secretary/receptionist, Cheryl, transcribes the audio into the transcript that you’re now reading. We have a number of contributors who have become very popular with our viewers and, you, our reading audience. Some of more popular ones are Chief New Leaf, a real Cherokee Indian Chief; Madam Shylock, a fortuneteller out of Cassadaga, FL; Professor Professor Wert, a worldwide intrepid explorer; Professor Zorkophsky, a shrink doctor who is also a bestseller and served a stint in the Swamp as an advisor to the government; and the Vietnam Veteran and the Talking Dog, our most-requested guest. And a shout-out to our good friend, Pastor Dunkin, down on Hawthorn Street.]

The Shakedown Industry’s Shot in the Arm (RR) added on Thursday, October 4, 2018