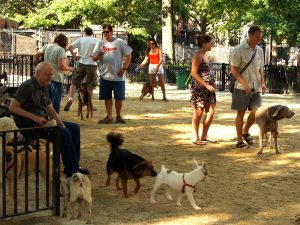 (Oct. 13, 2017) — “Good evening, ladies and gentlemen, and welcome to yet another exciting show in a long series of ‘Pulse of the Nation’ exclusive interviews with the breaking edge trend-setters in today’s world. Hello, I’m Roving and I’ll be your host for today’s show, which is going be one of those ‘oldies but goodies’ as soon as it’s recorded. That’s right, with me is the Vietnam Veteran with the one-and-only Talking Dog.”

“Sorry to interrupt, but the dog doesn’t actually do the talking.”

“Right. And now let me introduce to you the Talking Dog.”

“The dog says she’s glad to be here with your viewers to be able to answer the questions with total honesty. The dog says she can’t be called a bigot, racist or any kind of ‘homo-with-phobias.’”

“Well, I must say, you don’t mince words. Do you want me to ask questions or do you just want to talk?”

“Why don’t you run a commercial while my master takes me outside for a short walk?”

“And here comes the dog, back in the studio. Did you enjoy your walk?”

“Rude, but you’ve a nice stretch of grass along the curb. To answer your question, I’ve got a lot to say and not much time — I’ve a date at the dog park in an hour – so I’ll just do a little bit of rambling, if you don’t mind. If I’m not clear on something or if you want me to elaborate, please don’t hesitate to jump in and ask your question.

“The first subject I’d like to make clear is the subject of dog bags. There should be more of them. Tied with first is the subject of Islam. Now if I’m not clear, tell me. Islam is a way of life. Muslims practice the Islamic way of life, which means killing everyone who either is not a Muslim or doesn’t want to be one, and that includes all animals. Let me repeat my last statement: there is not one animal on the planet that has been, is now, or will ever be a Muslim.

“Islam is not a religion, but a Totalitarian form of government that controls every aspect of a person’s life, from the cradle to the grave. Muslims enjoy young wives, which is why they marry little girls and ‘honor-kill’ their wives when they get to be old or not pulling their weight. Muslims’ rate of murdering old women (30 and above) in a country where they collect welfare and/or Social Security payments that contribute to the family’s kitty are spared because of their standing in the census.”

“Come again? But before you answer we’ve got to pause for a commercial break.”

“If a member of a household was counted in the last census, he or she is eligible to collect money from the government. Muslims marry multiple wives who, in turn, have multiple children. Every wife and every child is given money from the government. It is not out of the realm of possibilities that one Muslim man can receive a government Welfare check totaling $20,000 PER MONTH, or more. PER MONTH; TAX FREE.

“The plainly and redundantly-expressed wishes (read Battle Plans) of the Islamic States is to subjugate all of the non-Muslim peoples of the world under Sharia Law, which means you either submit to Islamic rule by your wallet or your head. You’ve but two choices: submit or die.

“And this Islamic expansion has been under way for over 1,400 years. There’s at least three women — Brigitte Gabrielle of ‘Act for America,’ Pamela Geller of ‘Geller Report,’ and Sharon Rondeau of ‘The Post and Email’ — who are standing on the battlements spreading the truth about the so-called ‘peaceful and misunderstood religion’ when, in fact, it’s not that at all.

“Not misunderstood; on the contrary, what happened at that school in Beslan, Russia, in 2004, is an example that is not out of the ordinary at all, just like Boko Haram kidnapping those young girls in Nigeria. Actually, these kidnappings and murders are an everyday occurrence in an Islamic country or in a Muslim-controlled zone anywhere in the world, including in the 22+ Islamovilles that are strategically scattered throughout the USA.

“Islam is not a religion: Islam is a political model that allows old men to molest young girls, and everything else attributed to Islam is ancillary.

“I say bring back the Draft – men and women — with no deferments. No excuses. If someone can’t swim, they’re taught how to swim. If someone can’t pass the test, they’re taught what it takes to pass the tests. If someone is handicapped, maybe they can be a gate guard or answer phones. The point is that every citizen should be required to serve our country for at least two years. Maybe that’s the answer for the Kaepernicks of our country. Maybe if he were man enough to have served in the military he wouldn’t have been so stupid as to disrespect the flag.

“And now I must go to the dog park. Thank you for allowing me to say a few things that needed saying. One last point: we need to deport the Muslims that are here, okay? Kick them out of our military and every other government job.

“Another last point. The disrespect of the NFL to our flag, our country and our Veterans has been exposed. It’s like you can’t take Jerry Jones kneeling out of the equation or the players locking arms or hiding in the locker room: the genie is out of the bottle. The true disrespect of the players to the USA has been exposed: they told us how they really feel about America and we heard them loud and clear. I’m not watching the NFL ever again*. I didn’t watch it last year and I’m not watching the NFL ever again. The stadiums should be empty and that’s all I’ve got to say about it, except it’s too bad some good people have been flushed down the drain with the bad. Hey, join the club. What do you think the Vietnam Veterans felt like? Now I’m gone. Thanks for having me. Bye.”

“Enjoyed your talk; goodbye. Have fun at the dog park. And there they go. I see that our time is up and so, on behalf of the crew, I’d like to wish you all a goodnight: Goodnight.

[*I’m not watching the NFL ever again: prove it by going to: http://www.returntoorder.org/petition/boycott-the-nfl/?PKG=RTOE0386]