“YOU HAVE SET HIM UP TO FAIL”

(Jun. 9, 2018) — Virginia resident Beth Haycraft, whose husband Michael is incarcerated by the Tennessee Department of Correction (TDOC), wrote the following letter dated June 4, 2018 to the Tennessee Board of Parole, which denied her husband parole on April 10. According to his wife, Michael Haycraft suffers from three distinct mental illnesses as a result of childhood abuse and trauma. She has reported that he is a non-violent offender and that he is not receiving adequate treatment for his condition by the TDOC.

A copy of her letter, received on Friday, appears below. Haycraft has written to the parole board and a radio station previously about the lack of care mentally-ill inmates receive based on her experience and statistics published by the U.S. Department of Justice’s Office of Justice Programs.

Michael spent eight months in protective custody at the Morgan County Correctional Complex (MCCX) prior to his transfer to the Turney Center Industrial Complex (TCIX) after his unsuccessful parole hearing. At that time, Mrs. Haycraft reported that the handcuffs used during her husband’s transport were excessively tight, causing him undue pain and swelling.

Over the past three years, dozens of Tennessee inmates have reported abuse, lack of proper medical treatment, short-staffing, inadequate food service and food portions at various prisons. The conditions in at least two county jails, Shelby County and Monroe County, are also reported to be substandard and unhealthy. At one time, the U.S. Justice Department intervened in the management of the Shelby County facility with a lawsuit because of observed constitutional violations.

On March 20, 2015, the Justice Department announced the arrest of four Shelby County jailers for allegedly smuggling in the drug oxycontin “to provide to inmates.”  As has been reported copiously here, the entry of contraband into Tennessee jails and prisons has been well-documented by the inmates themselves.

In late April, MCCX inmate Grenda Ray Harmer, #88710, reported that four inmates were rushed to the hospital after overdosing on drugs, about which TDOC spokeswoman Neysa Taylor failed to respond to this writer.

Beatings, “terrorizing,” and other forms of retaliation and cruelty on the part of corrections staff have been reported at several Tennessee prisons despite the fact that Tennessee’s constitution prohibits the treatment of any inmate with “unnecessary rigor.”

One of Mrs. Haycraft’s questions for the TBOP is expressed as a declarative sentence at the bottom of page 1. “I would like to know how many Board members have qualifications to work with the severely mentally ill and if any among you are aware of the harm long term confinement causes individuals who are mentally healthy,” she wrote. “Such confinement is more damaging to those who already have mental illnesses. I can provide the Board with clinical research supporting my claim upon request.”

In her letter, Mrs. Haycraft requested that her husband be allowed to serve the remainder of his time in Virginia, as she claims that the state of Tennessee has “set him up to fail.”  According to Mrs. Haycraft, Michael must take the Therapeutic Community (TCOM) class “before the next hearing.” As it is a lengthy course, requiring between nine and 12 months to complete, Mrs. Haycraft is concerned that Michael will not be able to meet those requirements given that he is again in protective custody. 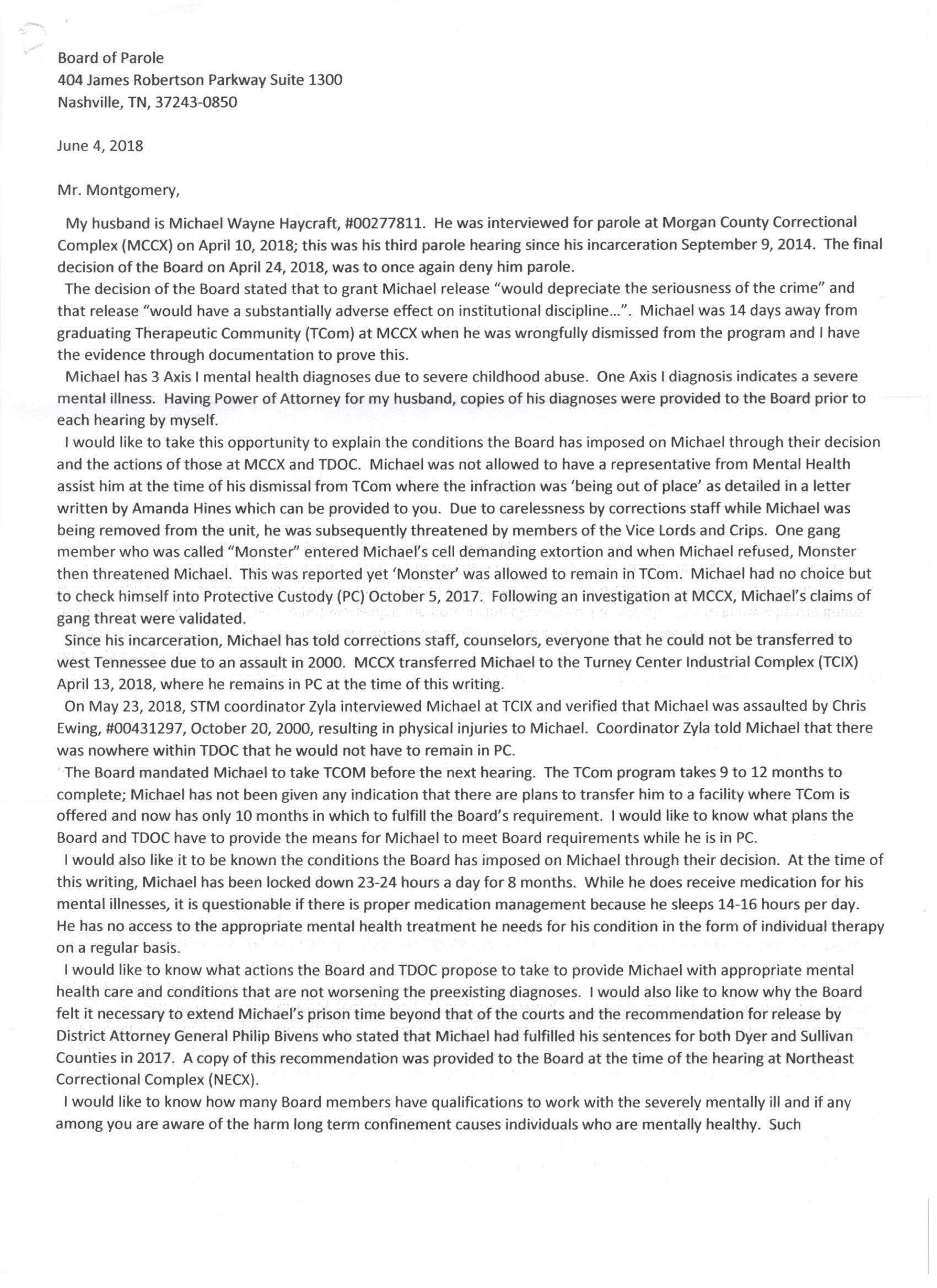 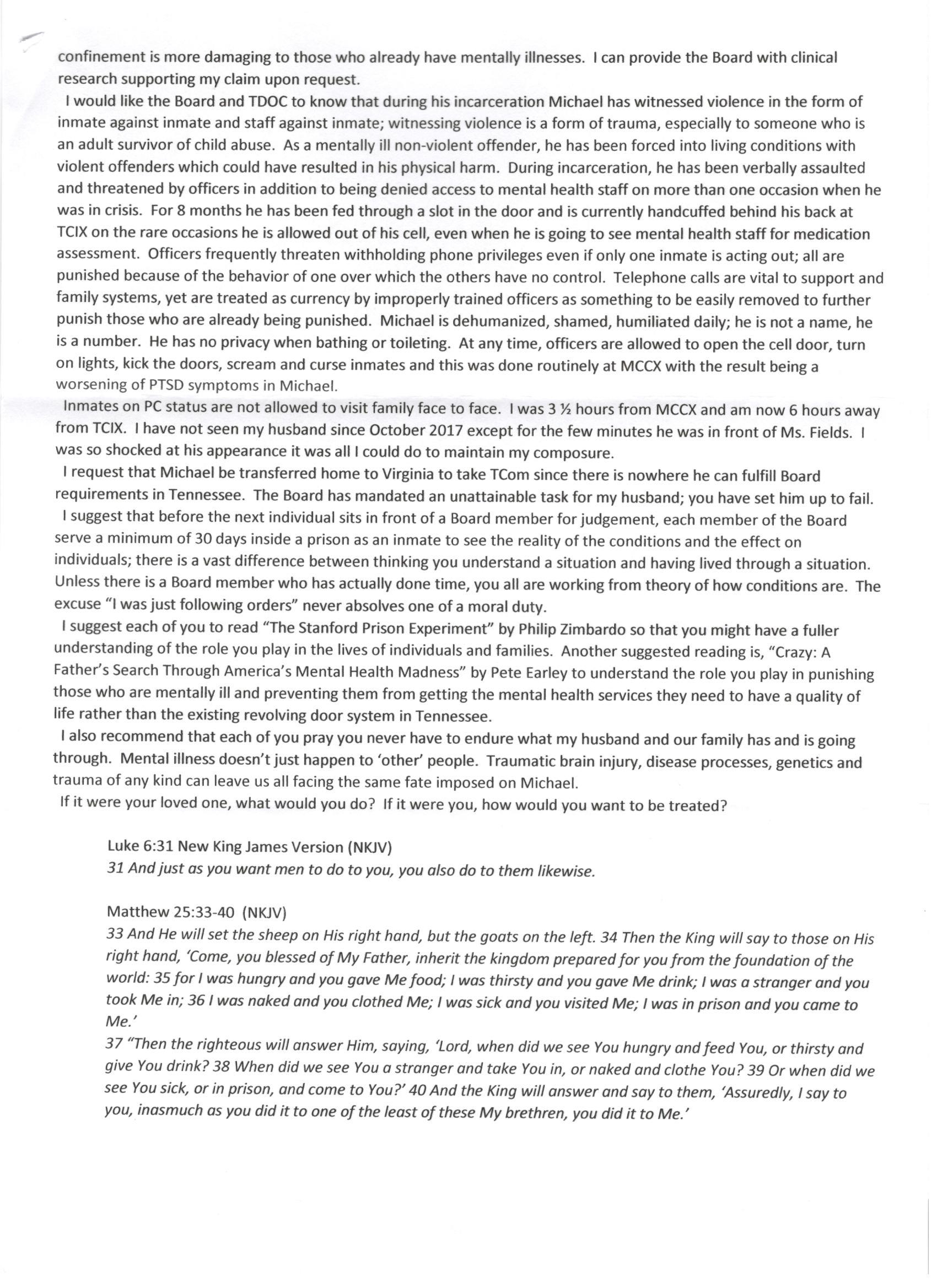 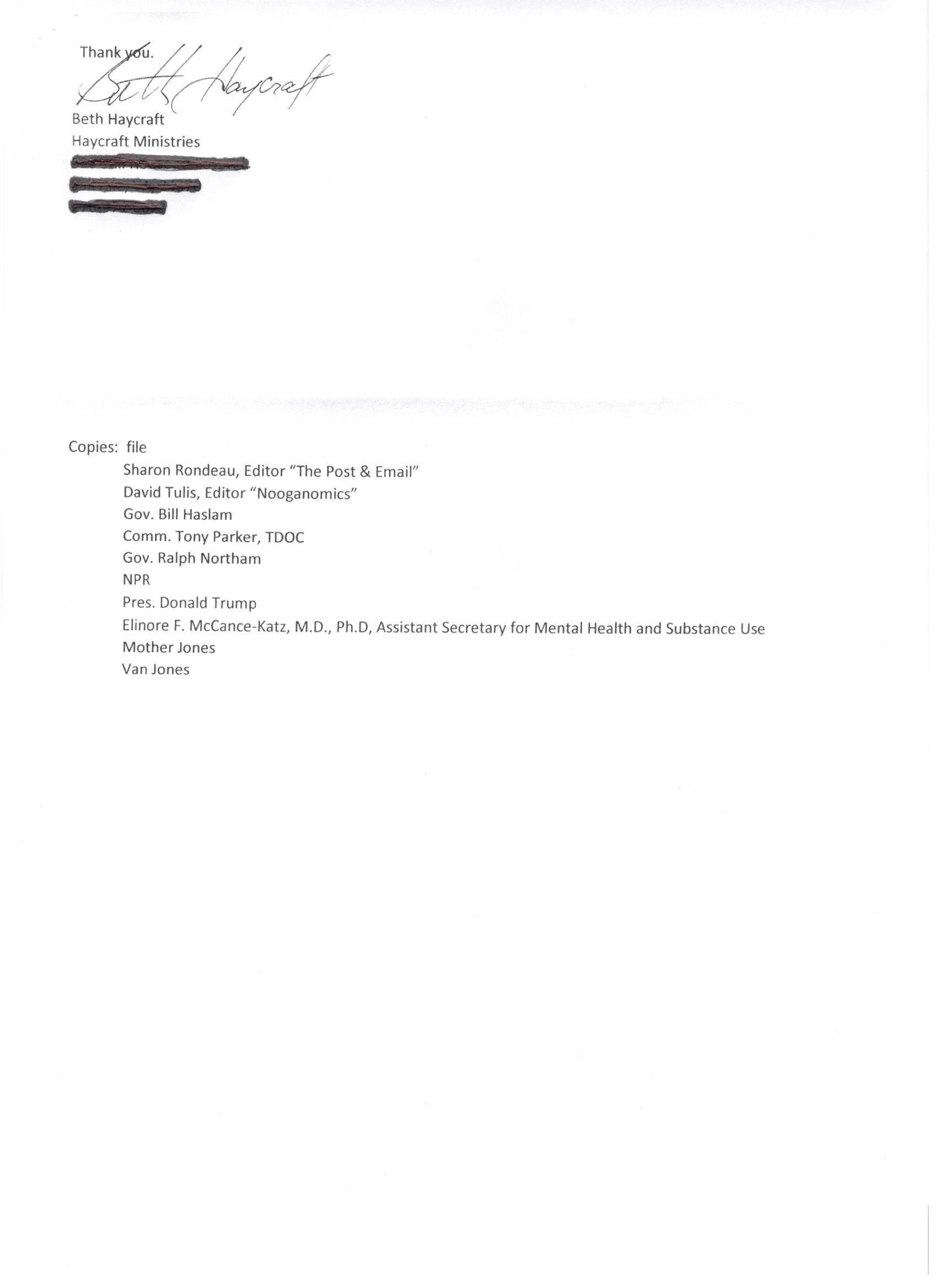 Wife of Mentally-Ill Inmate Addresses Tennessee Board of Parole added on Saturday, June 9, 2018