IN ADVANCE OF APRIL 10 HEARING 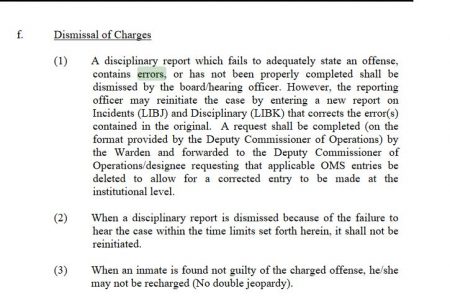 As TDOC administrative policies point out, “PC” is a placement designation stemming from a perceived danger to an inmate from one or more others within the general population.

Haycraft had been completing the “Therapeutic Community” (TCOM) program, a nine-month course which encompasses changing the cycle of drug and alcohol abuse, improving social skills, and the development of appropriate behavior toward other enrollees.

Haycraft’s wife and power of attorney told The Post & Email that her husband suffers from three diagnosed mental illnesses and does not believe he should ever have gone to prison given that he could have been unaware of the theft of which he was accused of carrying out as part of a group of men more than five years ago.

Mrs. Haycraft reported that last fall, Michael was within two weeks of finishing TCOM when he was expelled as a result of a disciplinary write-up unrelated to his attendance in the class.  Mrs. Haycraft said, however, that the write-up did not contain the charge which was ultimately cited as the cause of his removal from the class by the disciplinary board.

Mr. Haycraft received assistance from fellow MCCX inmate Grenda Ray Harmer, also in protective custody since last August, in the form of a March 2, 2018 letter sent to then-Warden Shawn Phillips.  In describing his perception of Haycraft’s situation, Harmer stated that Haycraft did not refuse to participate (RTP), which would have been potential justification for his termination, and that the date of the alleged infraction in which Haycraft was found to be “out of place” is inaccurate, among other claimed “violations” of TDOC policies and procedures.

In a letter dated March 20, 2018 directed to Richard Montgomery, chairman of the Tennessee Board of Parole, Mrs. Haycraft wrote that her husband was “unlawfully removed from Therapeutic Community (TCom), citing deficiencies in the disciplinary report her husband received, “lack of evidence to sustain guilty finding,” and the claim that the TDOC had committed “breach of agreement/contract” with her husband based on the agency’s own stated dismissal policy.

In her letter to Montgomery, Mrs. Haycraft stressed that the MCCX disciplinary board did not recommend that her husband be dropped from TCOM.  Quoting from TDOC Administrative Policies and Procedures, Section 501.02, Mrs. Haycraft wrote that if a “disciplinary report contains errors,” it “shall be dismissed by the board/hearing officer.” 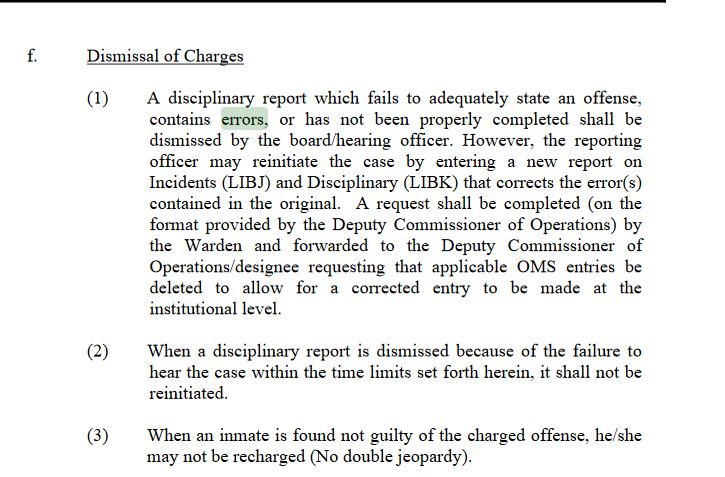 Mr. Haycraft’s parole hearing is scheduled for April 10.  His wife lives out-of-state and would like to see Mr. Haycraft receive counseling and other mental-health services not available to him within the TDOC system. 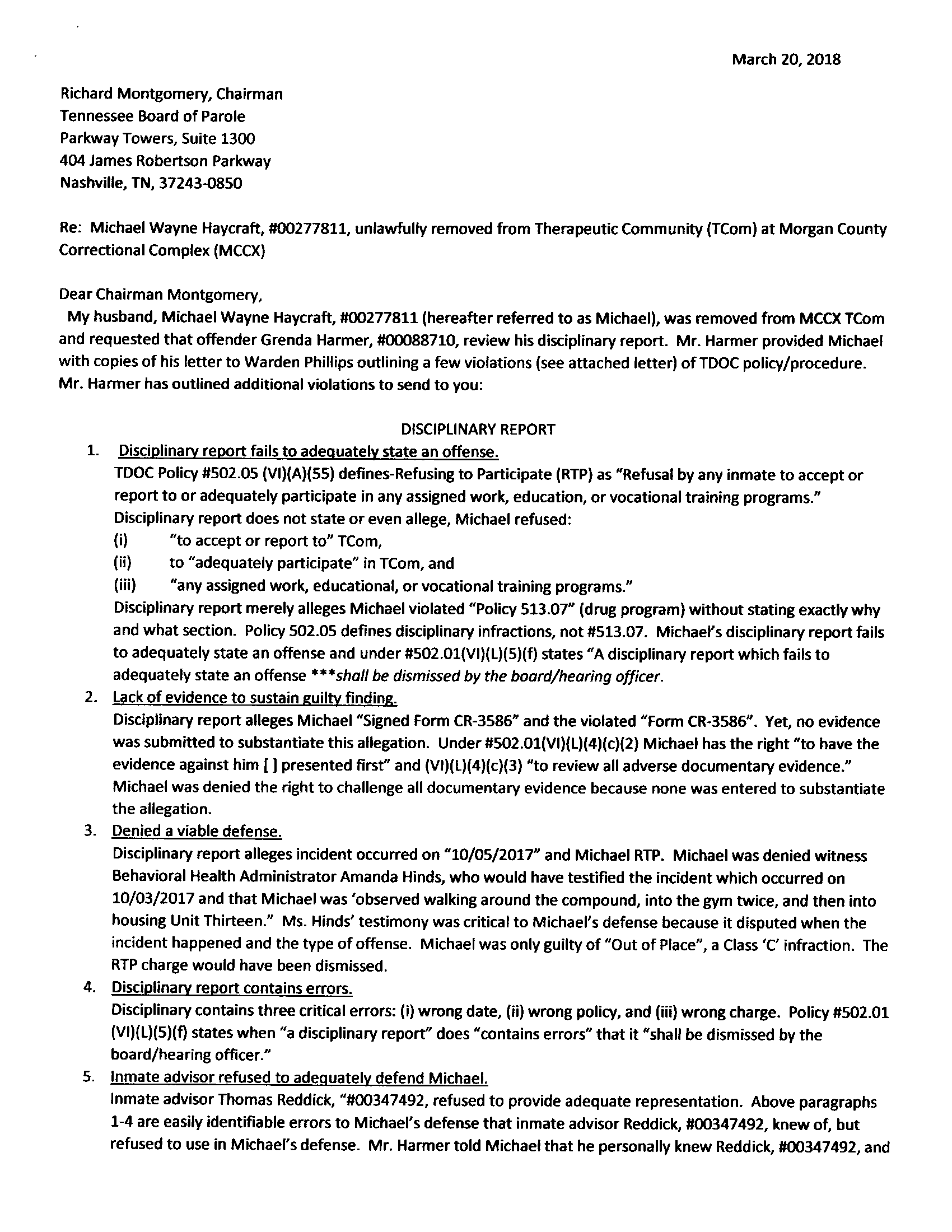 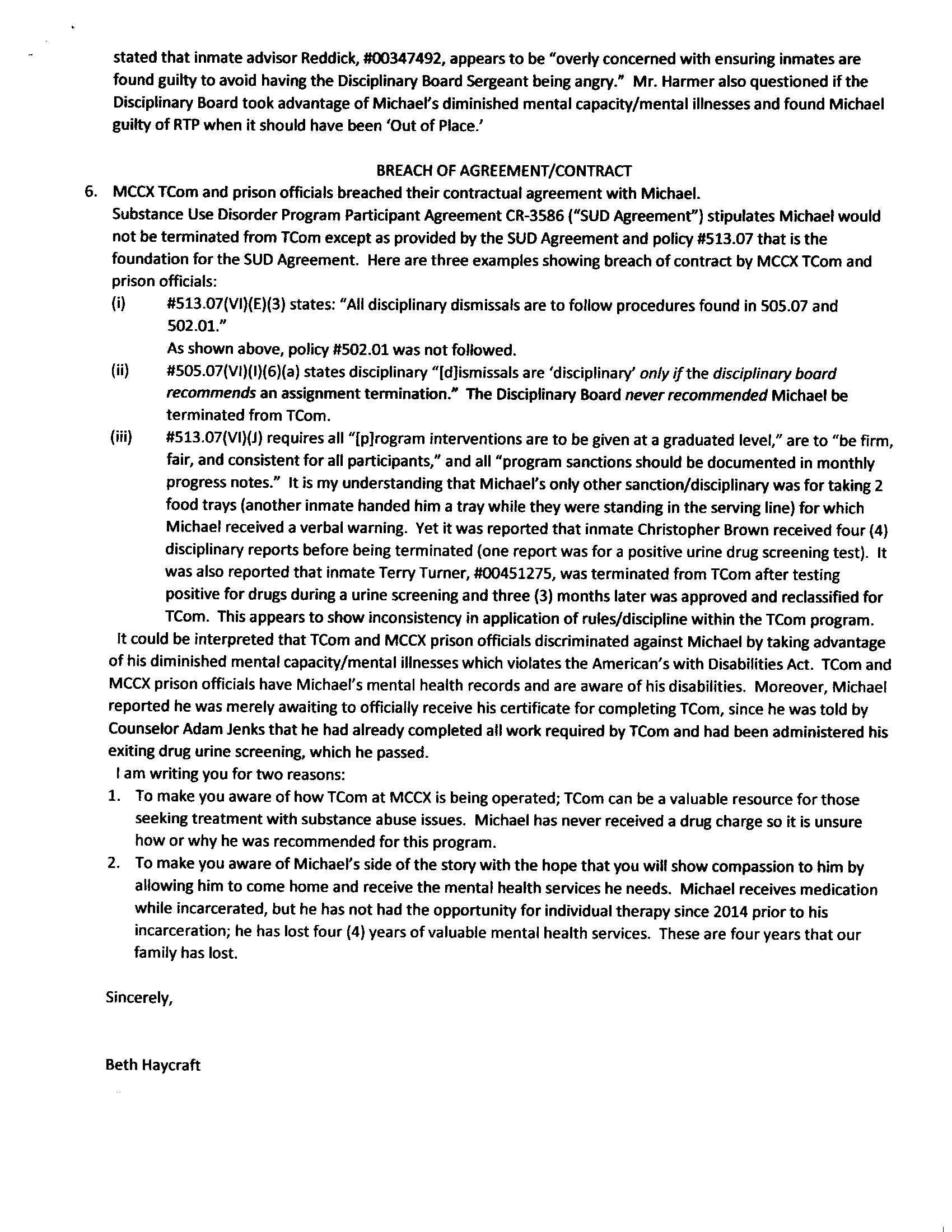 Inmate’s Wife Notifies Parole Board of Alleged “Breach of Agreement” by TDOC added on Wednesday, March 28, 2018