IF NOT, ARE THERE ALTERNATIVES?

(Mar. 15, 2018) — An inmate at the Morgan County Correctional Complex (MCCX) who was anticipating a positive parole hearing next month is now in protective custody with a disciplinary write-up and untreated mental health issues, according to his wife and power of attorney.

Michael Haycraft, TDOC #277811, had nearly completed the nine-month “TCOM” class when he was expelled for having been declared “out of place” within the prison.  While he was not required to attend TCOM, it was “recommended,” and Haycraft was moved significantly farther away from his wife from NECX to MCCX to allow him that opportunity.

“TCOM” is an acronym for “Therapeutic Community.”

Haycraft has three different mental health diagnoses, according to Mrs. Haycraft, who is also his power of attorney and gave us permission to write about his condition.  She said that her husband is a non-violent offender.

Last fall Haycraft was placed in protective custody in MCCX’s Unit 1 in a cell directly next to Grenda Ray Harmer, who was relocated to the unit on or about August 1 of last year.  Both had been deemed to be in danger from prison gang members.  The two men became acquainted, and Harmer recently wrote to Warden Shawn Phillips about Haycraft’s current circumstances after conducting extensive research into the events leading up to it.

Haycraft is scheduled for a parole hearing on April 10 after having been denied parole 18 months ago.  In November 2016 he was relocated from the Trousdale Turner Correctional Center (TTCC) in Hartsville to MCCX in Wartburg.  Mrs. Haycraft said that the Parole Board’s denial of parole for her husband appeared odd given that Michael had received a number of recommendation letters from various parties at the time.

A letter dated October 11, 2017 from Amanda Hinds informed Haycraft of the view of the “healthcare team” as to why he was terminated from TCOM. 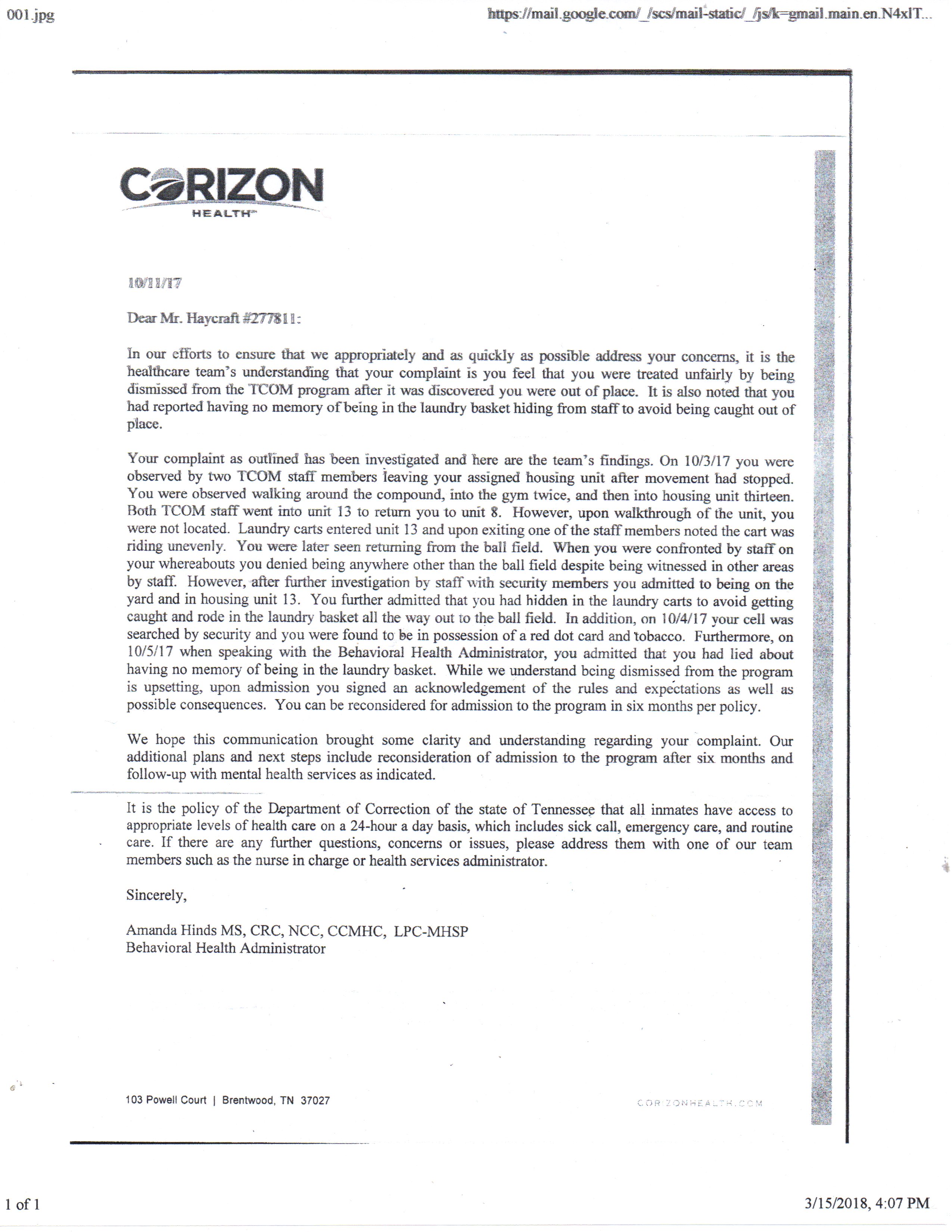 A former correction officer herself with a degree in psychology, Mrs. Haycraft has contacted a number of TDOC officials to plead her husband’s case.  In an interview on Thursday, she told us:

Michael was transferred to Morgan County in November 2016 and obtained a placement in the TCOM class in February 2017.  He was in a leadership position and was doing well.  The program consisted primarily of counselors going in and handing people a brochure that they could do on their own.

From what I understand, the program is intended to be all-encompassing, dealing with not only addiction issues, but also anger management, coping skills, and people with mental health issues.

His unit experienced a staff change three times, and that is always a very difficult thing because you never know what the skills of the instructor will be.  The last one was Adam Jenks.  Michael had told me for weeks that he did nothing; he sat in his office.  He didn’t talk to those who were getting ready to graduate TCOM.  In fact, Michael told me that Jenks had told him that he had already completed everything.  He had taken his exit drug screen successfully and had no disciplinary write-ups.  He was 14 or 16 days away from completing the program, which is nine months.

It is never good to allow someone with a mental health issue to have too much free time.  If he had completed all the work, he could have stayed involved and continued to help others.

Michael has an impulse-control issue, and through that, he knew that once he got out of the TCOM program, they would change his housing assignment. Instead of letting the facility do that, there was someone in another unit that he knew and considered celling with.  Imagine being trapped in a confined area with someone that you don’t like…that was why he visited the other unit.  That was what he told me as to why he went to the other unit.

It is bizarre and not the action of a 41-year-old man.  He was found to be “out of place” and received a disciplinary write-up.  However, when the disciplinary board heard the case, they charged him with hiding in the laundry basket even though it wasn’t mentioned in the write-up.  That was one of the things that Mr. Harmer talked about.  If that was what they were going to charge him on, by policy it should have been in the write-up.  The disciplinary board introduced that evidence, which is like going into a court and being charged with a specific crime, then having another one added.

When Michael is in a state of duress, he doesn’t make rational choices, which is a symptom of mental illness.  I don’t know if it was his idea to hide in the laundry basket or if it was somebody else’s.  When they said Michael was seen in another unit, he denied it out of fear of punishment.  It was like “kids’ mode.”  When he got back to the unit, Michael said he went to the counselor and admitted that he was out of place and that he had initially lied to them.

That’s the whole purpose of the program; to teach people accountability.  He implemented what one of the principles of the program is and got punished for it.  The counselor seemed to take it personally, which is the height of unprofessionalism.

The incident occurred on October 3 of last year.  On October 5, the staff met, and without Michael even being present and no representative from mental health, the counselors determined that he needed to be expelled from the program.  Other inmates who have been caught being out-of-place, some of them multiple times, got an in-house write-up or discipline within the program, and they were allowed to complete it.

Jenks said that Michael refused to participate but did not back it up with any documentation.  So that was improper procedure.  It was on October 5 that they made their decision.  How are you supposed to participate when you’ve been expelled from the program?

Michael had told me that as far as the disciplinary hearing, he told them that he did not refuse to participate, and they still found him guilty.  One of the staff told him that he was lucky he wasn’t charged with “escape” after they found him hiding in the laundry basket.

We looked up what they had done wrong, and he appealed to the warden, but he had no one there from mental health to act as his advocate.  The warden upheld the decision, and then Michael appealed to the commissioner.  Within a day or so, the decision came back, so you know that he didn’t review it.

He requested to go into Protective Custody. It’s sort-of like kids: when they find out a kid is in trouble, everybody piles on.  At the time he was outside of his unit transitioning to another part of the prison, and instead of locking his cell, they left it open.  So some inmates went in and took his things, including a $30 fan.  They ripped the cord off.  The officer was very snide, saying, “Oh, did this fan have a cord attached to it?”

This was total negligence on the part of the officers.  Internal Affairs found that Michael’s fears were founded, so he was moved to PC.

At first Michael was mentally more together than I had seen him in years.  He was alone in a cell; he had a shower in the cell, and he was doing well.  But he was moved in with a cellmate, and when you spend 23 hours in a confined area — even if it’s someone you like a great deal — it wears on you.

Michael is on the edge of a mental health crisis.  The officers are inconsistent about turning in requests for a sick call, even though they are supposed to turn in every single one.  They must also assure that the forms are available at all times to the inmates.

On the 13th, a nurse came, took his blood pressure, and said, “What’s wrong with you?”  He was standing there at the cell door with his cellie inside.  There was no privacy.  He should have seen Mental Health; that’s what his request was for.  The nurses are not RNs; they’re LPNs.

Mrs. Haycraft has been told by a TDOC official that her husband’s medical records cannot be made available to her despite her POA status, although her husband was given a medical release form which he signed, enabling his wife to receive medical briefings over the phone.

Just before press time, Mrs. Haycraft wrote in an email to Marie Williams, Commissioner of Tennessee Department of Mental Health & Substance Abuse Services, that her husband told her in a phone call that “he was seen by two women that he ‘thought’ were from Mental Health on this date. He was asked questions about his current mental state, his diagnoses, his expulsion from TCom, the conditions in his current housing unit that are exacerbating his mental illness and other. He stated that one of the women took notes as he spoke.”

During our earlier interview, Mrs. Haycraft complimented Williams on her “caring” attitude and effort demonstrated within a very difficult environment, a sentiment she again expressed in her evening email to Williams.

For his part, Harmer asserted in a March 2, 2018 two-page letter to MCCX Warden Shawn Phillips that Haycraft’s removal from the TCOM (Therapeutic Community) class was “wrongful” and should be corrected to “avoid unnecessary litigation.” 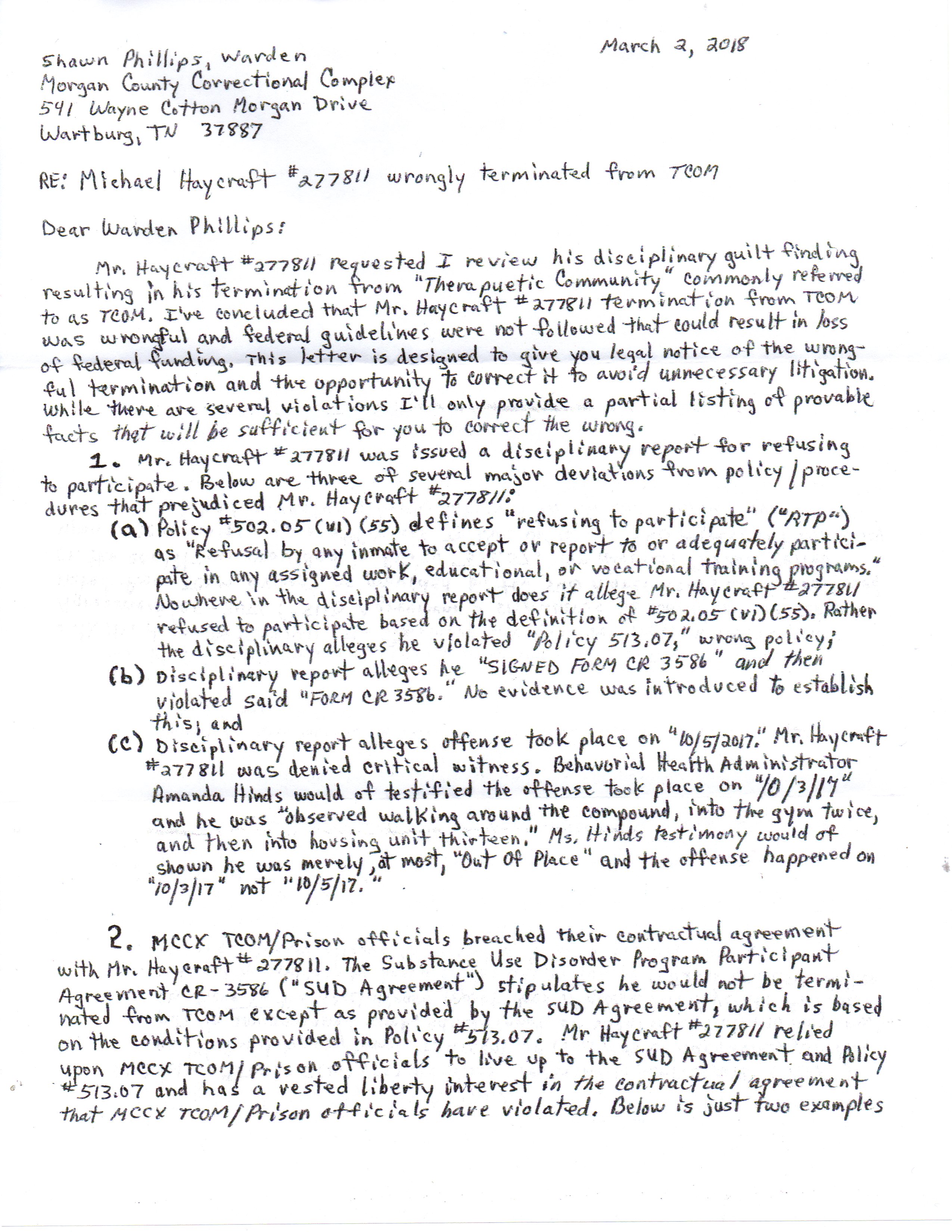 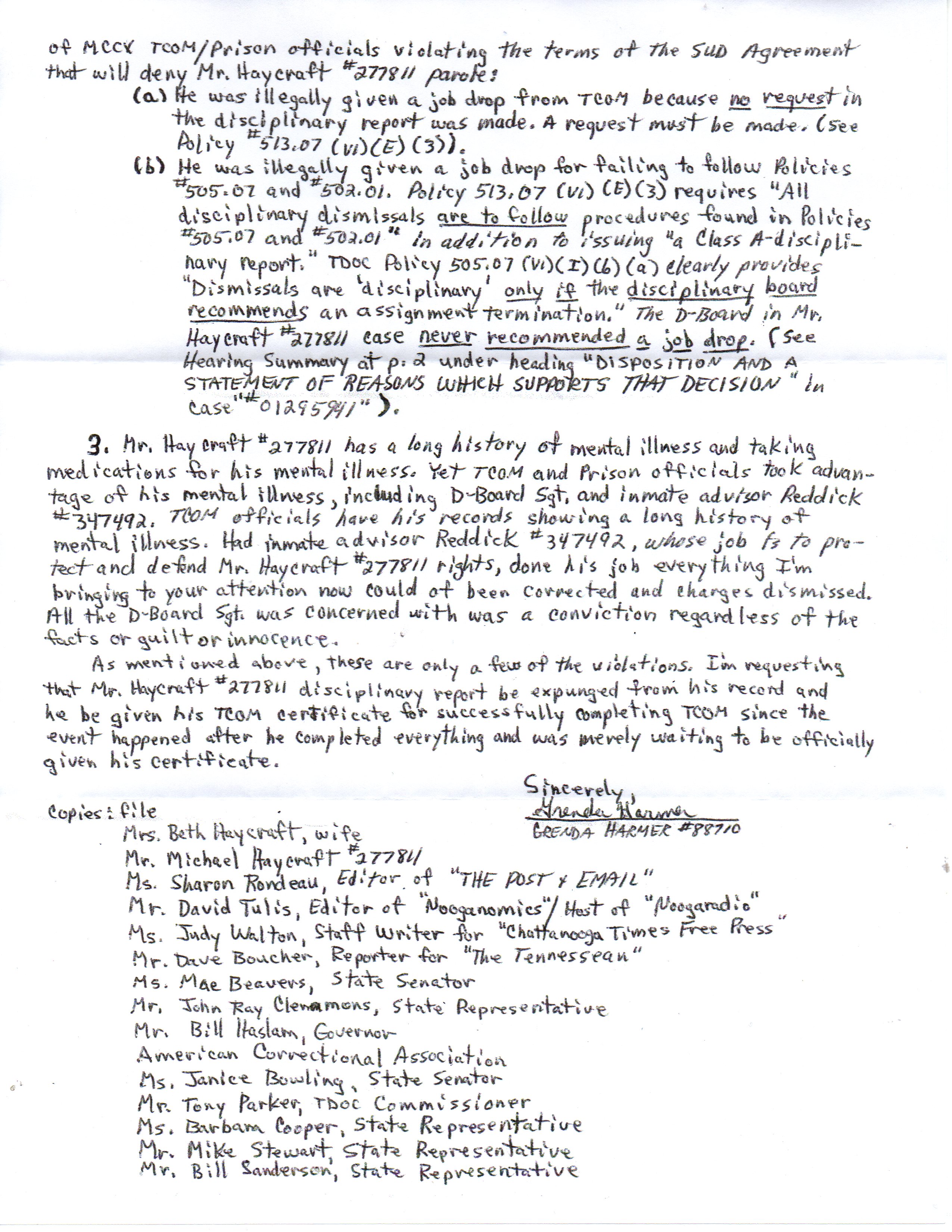 Phillips is reportedly being replaced in the very near future.  On Thursday, Mrs. Haycraft said that to the best of her knowledge, Harmer has received no response to his letter.

Are Prisons the Right Place for Mental Health Patients? added on Thursday, March 15, 2018