INTERNET BUSINESSMAN SPEAKS OUT ON UNFLATTERING EMAILS PUBLISHED BY WIKILEAKS 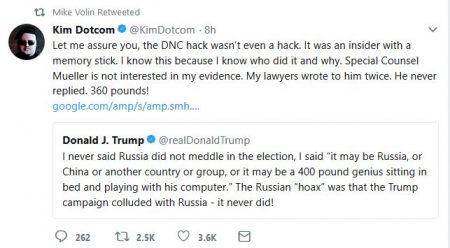 (Feb. 18, 2018) — On Sunday evening, internet entrepreneur Kim Dotcom tweeted, in response to a tweet issued Sunday morning by President Donald Trump, that the intrusion into the DNC servers in 2016 was done by “an insider with a memory stick.”

“I know who did it and why,” Dotcom continued.  His tweet contained a link to a June 24, 2016 article in The Sydney Morning Herald which quoted him as having said that “he would be Hillary’s ‘worst nightmare in 2016,'” referring to former Democrat presidential candidate Hillary Clinton.

Dotcom, who is a New Zealand resident, has made similar claims previously on Twitter and specifically said that the “insider” was former DNC employee Seth Rich, who was killed in cold blood on the morning of July 10, 2016 not far from his Washington, DC home.

The mainstream media has toed the government line that Rich was killed in a “botched robbery” despite the fact that his valuables were found on his person when EMTs arrived to transport him to the hospital while he was still alive.  Rather than investigating, major media has blindly claimed that any possibility that Rich had contact with WikiLeaks, particularly to transmit the DNC emails, had been “debunked.”

The same term continues to be used when anyone hints that Barack Hussein Obama’s “long-form” birth certificate is not authentic, as has been reported by a criminal investigator who has stood by his claim for the last six years on numerous radio shows and interviews.

Former detective Mike Zullo’s findings have never been investigated by Congress, a grand jury, the Justice Department, or the FBI.

Dotcom has said that he “was there” when Rich used the memory stick to download a trove of emails exchanged among DNC staffers which, when published by WikiLeaks in July 2016, led to resignations, including that of then-DNC chairman Debbie Wasserman Schulz. 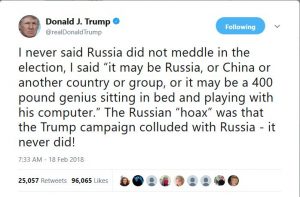 In response to Trump’s contention that “meddling in the election” could have been carried out by “a 400 pound genius sitting in bed and playing with his computer,” Dotcom commented, apparently speaking of himself, “360 pounds!”

Last August, Rep. Dana Rohrabacher (R-CA48) told Fox News’s Sean Hannity and others that when he met in person with WikiLeaks founder Julian Assange at the Ecuadorian embassy, Rohrabacher became convinced that Assange had proof that the DNC hack was not perpetrated by the Russians.

Assange has long said that no “state party” was the source of the DNC emails.

At that time, Rohrabacher said he was in the process of setting up a meeting to speak with Trump about the results of his meeting with Assange. It is unclear if that meeting ever took place.

While strongly implying that Rich was a source, Assange has not positively confirmed it in accordance with his policy never to reveal sources.  Following Rich’s untimely death at the age of 27, Assange offered a $20,000 reward to anyone providing information leading to a conviction.

Hannity has interviewed Assange on multiple occasions as well as exchanged tweets with him from time to time.  For what appears to be a limited time last spring, he exchanged tweets with Dotcom, although plans for Dotcom to appear on his TV show were reportedly jettisoned by Hannity’s producers following left-leaning media outlets’ campaign to force the show’s advertisers to cease their support based on his coverage of the Rich story.

Both Assange and Dotcom have said on Twitter that Special Counsel Robert Mueller, who is investigating claims of “collusion” between the Russians the Trump campaign and Russian “meddling” in the 2016 presidential election, has shown no interest in the evidence they claim to have about the DNC intrusion.

Update, 9:03 AM EST, February 19, 2018: The Intercept reported on February 14 that, according to Rohrabacher, the Congressman has been “blocked” from meeting with Trump by Trump’s chief of staff, John Kelly, regarding the information he gleaned from Assange last August.