On Tuesday, May 16, Hannity presented a segment about the case, which has received renewed attention since a former Washington Metro Police Department (MPD) detective, Rod Wheeler, stated that he was told by a Metro Police officer that pressure has been placed on the department not to investigate the cause of Rich’s death for “political” reasons.

Wheeler told Hannity that he was hired by a third party to probe the case outside of the MPD for the family.

He also said that a federal-level investigator working on the case confirmed that evidence exists that Rich was in touch with WikiLeaks, an open-government organization which releases documents containing government secrets and political intrigue.

WikiLeaks founder Julian Assange has intimated that Rich was a source. Immediately following the announcement of Rich’s death, Assange offered $20,000 for information leading to the identification of the killer(s).

On May 17, The Huffington Post attempted to discredit the reports on the Rich case issued by Fox News Channel; Fox5 in Washington, DC, and Wheeler as “conspiracy-mongering.”

“…since Rich’s death, right-wing websites have pushed the conspiracy theory that the Democratic Party, DNC or Democratic presidential nominee Hillary Clinton was somehow responsible for the killing because of Rich’s supposed ties to WikiLeaks. The theory rests on WikiLeaks’ release of a trove of internal DNC emails weeks after Rich was killed,” wrote Travis Waldron of HuffPo.

However, neither the Fox local affiliate nor FNC accused the DNC or Clinton of anything; Wheeler had said only that “political reasons” were hampering the official MPD investigation.

On May 16, the website “DCist” outlet harshly faulted Fox5 for it what it described as “peddling shameful hearsay” about the case to include Wheeler’s statements.

At issue is that Wheeler first said that he possessed evidence that Rich had been in touch with WikiLeaks but later said that the claim was made to him by “the reporter at Fox News.”

A Fox News article published the same day as Hannity’s broadcast indicated that a “federal investigator” told the reporter, Malia Zimmerman, directly that “I have seen and read the emails between Seth Rich and WikiLeaks.”

“Metropolitan Police, including the police chief, have refused to discuss the case, despite requests from Fox News dating back 10 months,” Zimmerman reported.

Hannity also spoke about the case on his radio show that day.

Two days later, DCist wrote that Fox5 had posted a “clarification” to its original article but that the family was seeking a full retraction and an apology, with the suggestion that legal action could be an option were the outlet to refuse.

The clarification indicates that, concerning Wheeler, “What he told FOX 5 DC on camera Monday regarding Seth Rich’s murder investigation is in clear contrast to what he has said over the last 48 hours. Rod Wheeler has since backtracked.”

The threat of legal action was apparently not a deterrent for Hannity.  On Friday, he presented a segment (begins at 12:24) featuring guests Juan Williams and Jay Sekulow speaking about the broader issue of Russian involvement in the U.S. election but touching on the Rich murder case.

Hannity showed a recap of an interview Assange did with a Dutch television station in which Assange told the interviewer, “There’s a 27-year-old who works for the DNC, shot in the back, murdered…”

“Was he one of your sources, then?” the interviewer asked, to which Assange said, “We don’t comment on who our sources are…”

On Friday, the UK Daily Mail incorrectly reported that WikiLeaks “clarified” that Rich “was not the source” of the emails.

Hannity asked his guests whether or not, in the event that it was found that a “disgruntled” DNC member had turned over the emails to WikiLeaks, the “whole Russian narrative,” meaning the determination by the U.S. “intelligence community” that the Russians were responsible for the DNC computer breach, would be dispelled.

Going back to February, a Nebraska television station interviewed Rich’s parents, citing some of the speculation which had arisen about a possible connection to WikiLeaks.  KMTV reported:

Not only are the Rich’s [sic] grieving their son’s murder they also have to deal with speculation and rumors about his death.

Everything from working with Wikileaks to releasing DNC emails to the Clinton’s killing him. and now the Russians killed Rich.

Wikileaks added to the speculation by offering up a $20,000 reward to help find Seth’s killer.

The article then reported that a “crisis consultant” was “hired” to “handle all the speculative questions.”

The Post & Email found that the company was co-founded by Bauman and describes itself as possessing “communications consultants with progressive client lists.”

An NBC News article dated May 19 states that a Rich family attorney sent Wheeler a “cease-and-desist” letter and that Wheeler “has since completely recanted his story, both in the press and in a private message to Rich’s family.”

The Post & Email was unable to find evidence of Wheeler’s “complete recanting” of what he told Hannity on Tuesday, including the allegation that the MPD investigation had been affected by a “stand-down” order.

In January, The Washington Post acknowledged that Rich was speculated to have been the source of the emails published by WikiLeaks in July, just before the DNC convention.  In its article, The Post attempted to characterize the idea as a ridiculous conspiracy theory.

On Wednesday evening, columnist JB Williams published a piece in which he demonstrated documented connections between Amazon.com, The Washington Post, and the Central Intelligence Agency (CIA).

Born as Kim Schmitz in 1974 in what was then West Germany, Dotcom currently resides in New Zealand, where he is fighting extradition to the United States on charges of criminal copyright infringement and racketeering filed in 2012 by the U.S. Department of Justice in regard to his now-defunct file-sharing service, Megaupload.

As a young adult, Dotcom was convicted in Germany for computer hacking and other crimes, followed by a charge of embezzlement.  Both instances resulted in suspended sentences.

Dotcom’s home has been raided and his communications illegally collected, as declared by a New Zealand judge, and reportedly supplied to the United States under the “Five Eyes” agreement.

The Twitter exchange between Dotcom and Hannity began with Dotcom’s tweet in which he offered “written testimony with evidence that Seth Rich was @Wikileaks source” were Congress to incorporate Rich’s case into its investigations into the alleged Russian interference in the election.

In response, Hannity tweeted back, “You have that evidence??” He then asked Dotcom for “more detail,” to which Dotcom replied, “I’m the evidence!!” 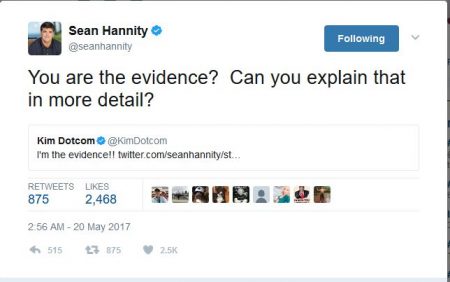 Dotcom then additionally responded, “I knew Seth Rich.  I know he was the @Wikileaks source.  I was involved.”

This story was updated at 9:30 p.m. EDT to add the reference to the UK Daily Mail.