The second hour of the show opened with a discussion of “the Trump dossier” as “one of the biggest frauds” perpetrated on the American public.

Gallups invoked the recent appearance of Rep. Matt Gaetz (R-FL1) on FNC’s “Hannity” wherein Gaetz said that a four-page classified memo reviewed by the House Intelligence Committee could have “criminal” ramifications involving abuse of FISA to conduct surveillance of the Trump campaign and transition team.  “I believe there are people who will go to jail” over the revelations contained in the memo, Gaetz told Hannity on Thursday night.

The dossier is now believed to have been presented to the FISA court as justification to obtain a warrant to wiretap Trump associates at Trump Tower in the last weeks prior to the 2016 election and afterward.

Zullo reminded the audience that House Democrats voted against the release of the memo not only to the American people, but also to other members of Congress outside of the House Intelligence Committee.

Gallups said that Gaetz has been briefed on Zullo’s findings on the birth certificate, which Gallups claimed is “deeply connected” to the classified memo.  “You’re sitting on top of the information,” Gallups said to Zullo.

After hearing the clip of Gaetz’s appearance on Hannity, Zullo said that “one side of the aisle” is obfuscating the memo’s contents in the same way in which it obfuscated the fraudulent “birth certificate” image foisted upon an unsuspecting public as authentic.

“They didn’t think the investigation was going to get the legs that it got,” Zullo said, reminding the audience that former NSA and CIA contractor Dennis Montgomery, who in late 2013 provided data on government spying to then-Maricopa County Sheriff Joseph Arpaio, “really became problematic not only for Obama, but also for the ‘Deep State.'” 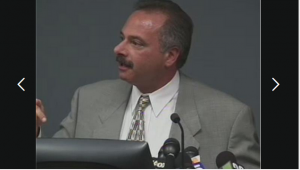 “They believed wholeheartedly that Trump would lose,” Zullo continued.  “Mark my words today:  all roads lead back to Obama, and when it starts going that way, it’s just a matter of time before they get to this big question that’s been burning:  ‘What about that birth certificate?'”

Gallups reminded his audience that Montgomery had presented evidence, as reported by Dr. Jerome Corsi, that Infowars’s Alex Jones, Trump while a businessman, radio host Michael Savage, Arpaio, U.S. Supreme Court Chief Justice John G. Roberts, and others were “spied on” by the “Deep State” without a warrant.

Zullo said that Obama “got a pass” despite the “illegal activity” that is coming to light with each passing day, speculating that Obama knew about the spying.  “Do you really think making a phony PDF file is something that these people wouldn’t do?” he asked.

Gallups tied the birth certificate forgery to the Trump dossier and Hillary Clinton and the DNC’s reported funding of it, along with the assumption by members of the “Deep State” that Clinton would win and no one would be the wiser about the illegal spying on American citizens.

Zullo suggested that the birth certificate forgery was used to blackmail Obama while he was in the Oval Office.

After a break, Gallups raised the claim made by the mainstream media that the birth certificate forgery “has been debunked,” particularly since Arpaio, who commissioned Zullo’s investigation, announced his bid for U.S. Senate less than two weeks ago and has unabashedly spoken about it in interviews.

“It hasn’t been debunked,” Gallups said, to which Zullo responded that “it is a fraudulent document…it is not a birth certificate.”

Zullo reminded the listeners that Perkins Coie, the law firm connected to commissioning the Trump dossier by paying FusionGPS, defended the PDF file without ever presenting a real, paper document from the Hawaii Department of Health (HDOH) to a court in which a ballot challenge or lawsuit against Obama’s eligibility was filed.

Gallups described the creation of the “fake” birth certificate as “the crime of the ages.”  “They installed a man in the White House to run our military and to run our economy for eight years…on fake ID, and they don’t want the world to know,” he said.

As an example of the Obama regime’s illegal activity, Zullo asked, referring to the Iran “nuclear deal,” “How much money did they airdrop under the cover of darkness, cash, to Iran?”

Gallups thanked Zullo for appearing, closing the segment with “FusionGPS is about the birth certificate.  I promise you.”